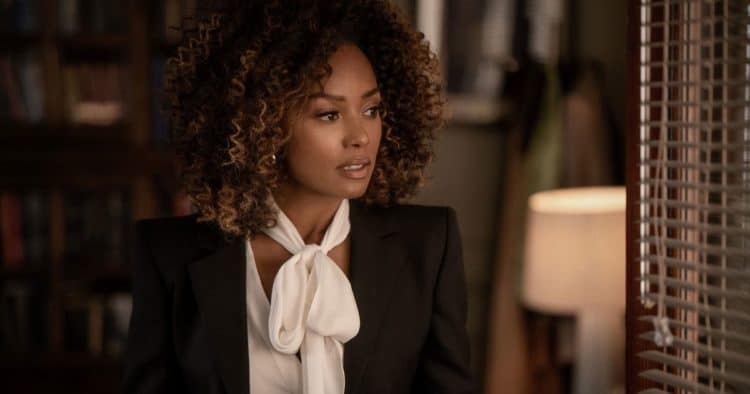 On Power Book II: Ghost Season 2, Episode 5 we received a devastating blow to the gut when Tariq was arrested on campus for the murder of Professor Jabari Reynolds and Detective Ramirez. Although we knew it was coming since Cane planted Detective Ramirez’s badge in Tariq’s dorm, we know how inconvenient getting arrested for murder would be for Tariq. On Power Book II: Ghost Season 2, Episode 6  Tariq sits in a jail cell for a few days after being denied bond by the judge. Davis makes it clear that his only chance at getting out on bond is getting someone with powerful connections to get him a favorable judge. Tariq makes a deal with Rashad Tate to get dirt on Braden’s uncle since he plans on running for Congress. Tariq ends up getting a bond, but he has to wear an ankle monitor which prevents him from stepping foot outside of Manhattan. Davis and Saxe tell Tariq that he needs to do his best to stay out of trouble while out on bond. Tariq asks if they were able to locate his mom. It turns out that Tasha is in Mexico and she’s been asking to speak with Tariq. However, Saxe and Davis agree that letting Tariq speak to his mother isn’t a good idea right now. Possibly because they need to present a clear-cut case and Tasha in Tariq’s ear could sabotage their efforts.

Meanwhile, after a decade the Tejada family has finally been reunited.  To celebrate the real leader of their organization coming home, they host a big welcome home party. Usually, reunions evoke feelings of happiness and excitement. However, Monet and Cane are tense and resentful as they realize that the power they acquired during Lorenzo’s absence is now in jeopardy. Now that Lorenzo’s home, he’s ready to resume leadership, and he strategizes on how he’s going to make his big comeback in the drug game.  What has Monet on edge the most is the new vision that Lorenzo has for his family. He chooses Dru to serve as his right-hand man, despite the promises he’s already made to Cane. Lorenzo also believes that Diana doesn’t belong in the streets and that it’s time for her to enroll in college.  Monet knows that Dru isn’t built to run the Tejada organization while Cane’s ego is hurt that his father would disregard all the work that he put in the streets while he was away and choose his younger brother when it’s clear that Dru doesn’t have the qualities needed to survive in the street.

Back on campus, Tariq doesn’t know who to trust. He finds out about Cane playing Brayden and feels betrayed. Tariq decides to cut ties with Lauren because she doesn’t know what to believe. “You’re either with me or against me. And you’re against me,” are his last words to her as he officially breaks things off. Effie steps up to the plate big time in this episode. She’s Tariq’s most valuable confidant and she helps him put things in perspective which is kind of ironic since she crossed him in the past. Effie reminds Tariq that he needs Brayden because he needs to make money. She also tells him that Brayden deserves a second chance because he wasn’t intentionally disloyal and Tariq did keep Brayden in the dark.

Monet and Cane decide to work together to keep moving drugs at Stanfield behind Lorenzo’s back. Brayden informs Monet that Tariq is out on bail indicating that Cane doesn’t have as much control over Brayden as he thought he did. Although she didn’t agree with Cane setting Tariq up, she gives Davis $250,000 to give her any information regarding Tariq that could potentially hurt her family. Cane brings Brayden to meet with Monet to convince her that they won’t need Tariq to continue to move product at the school. Tariq finally makes contact with Monet. Monet promises Tariq that she had no idea that Cane was setting him up and she gives him her word that she’s going to watch Cane. She also makes it clear that touching Cane is off-limits because that’s her son. Tariq sends Effie to meet with Monet. Monet is a bit skeptical about Effie because this is their first time meeting. But Effie kind of removes us of a young Monet. She’s sharp, she’s confident and she knows what she’s doing. Monet just might be impressed. Monet tells Effie that she’ll be in touch.

Lauren confronts Professor Carrie about manipulating her into wearing a wire to clear herself as a suspect in Professor Reynold’s murder. When Carrie tries to manipulate her further, Lauren threatens to expose her affair with Zeke. Tension is rising in the Tejada household. Lorenzo doesn’t see that Monet is no longer just some housewife, but a valuable player in the game. Dante is determined to meet his son Zeke although Monet feels that it would negatively affect his basketball career. What will happen when Zeke finds out that Mecca is his father and Monet is his mother? What will Lorenzo do when he discovers that their new plug is his wife old lover?