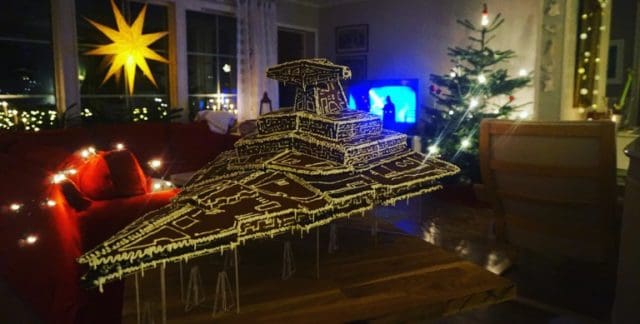 This gigantic Class-II Imperial Star Destroyer was entirely made from gingerbread by the very talented folks over at Star Wars Bakery. The creation is currently on display at the EA Dice office in Stockholm, Sweden. You can just hear the Imperial March when you look at it can’t you? This thing looks amazing, and more to the point it looks like it might have taken a long and arduous amount of time to piece together, as well as a few fervent prayers that it would remain in one piece. Some people build houses, other people cabins, some decorate gingerbread men and women, but the Star Wars Bakery took it above and beyond in making something that was so unique and awesomely impressive that just to look at the thing you have to wonder how long it took and how they managed to get to this office in one piece.

The structural design for this creation must have been intense since it has to have something on the inside holding it together. As ingenious as this giant treat is I can’t see it just being glued together and held over empty space on the inside. There would almost have to be some sort of support structure on the inside to secure against the thing’s own weight toppling it inward, as this is a lot of graham cracker and icing to hold up all on its own. That doesn’t take away from the sheer magnitude of it, but just from a structural standpoint it would definitely need something that would not give way. 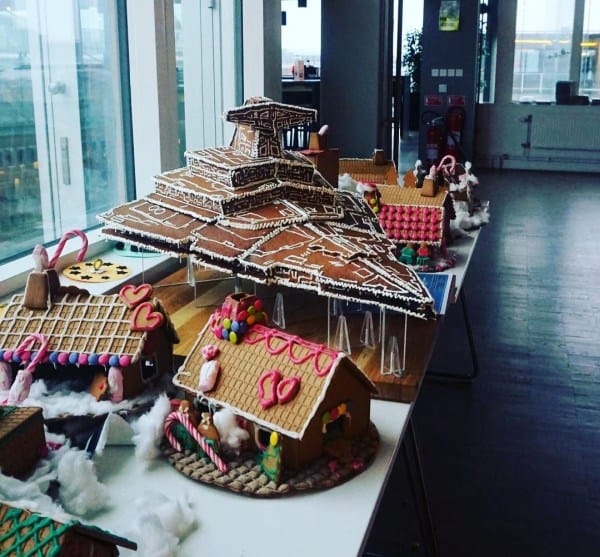 The designs and the look of the ship on the outside are impeccable as it looks like it might be able to fire up and sail across the room at any moment. Though I do wonder if the dripping icing was intentional or just a product of having to move fast enough to get the pieces glued together. It offers an interesting look as you could possibly imagine a Star Destroyer making its way through some frigid climate that somehow left icicles dangling from every conceivable edge. Obviously fanboys might have an issue with this and would cite that there’s no such thing as an icicle in space and that anything burning as hot as a Star Destroyer’s engine would never allow for such a thing.

But the visual and the imagination is nice all the same. Someone took a lot of effort to put every piece at just the right angle and in just the right spot to authenticate the look of this massive ship. 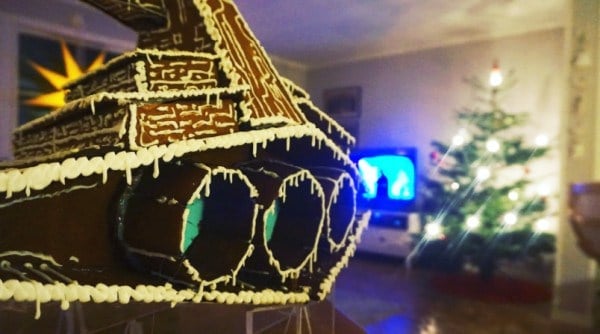 On the inside of the backside it almost looks like someone might have gotten in too big of a hurry and possibly rushed the icing a little bit, but perhaps that’s just a product of the ship shifting in transit. Demanding utter perfection with a gingerbread construct seems easier when it’s smaller and isn’t meant to be shipped from one location to another. Give the bakery mad props for this though, this is truly a marvel to behold. 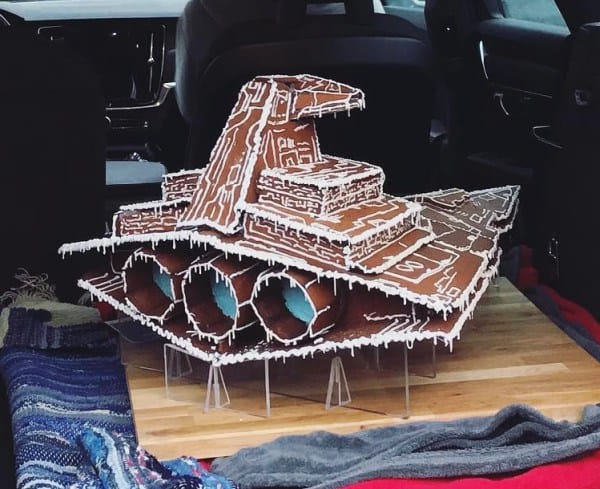