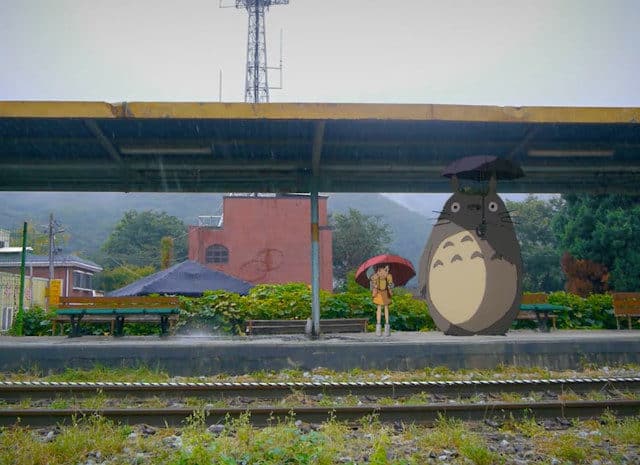 Ghibli cartoon characters are creepy unless you’re used to them. I get the feeling that a good part of the world feels the same about American cartoons, even if they’re set into real world settings like this. Maybe it’s the fact that I am in fact biased and am not a fan of Japanese animation, but something about these characters gives me the creeps. I get the idea that some of them are supposed to be uplifting and actually pretty cute, but all in all they are a little on the nutty side in my opinion. But to each their own and I do understand that every region has their own style of animation and story telling.

The Japanese however seem to have a large emphasis on eyes and facial features in many of their characters. The more open the face and the wider the eyes the more likely it is that you can trust the character, or that they are at least more open about what they do and say. The more pinched and close together the features are the less likely it is that they are good people. That seems to be the idea in some cases but it doesn’t appear to be a universal idea really.

Japanese animation has been gaining a lot of ground in America throughout the last decade and more, and it’s become something of an obsession and a passion with some people. In all honest I only understand about half of the story lines but what I have seen isn’t that bad. Their idea of a story is a lot different obviously but it comes from their culture and their ideals, which is pretty normal. What might seem odd to an American concerning Japanese animation is probably par for the course to those that understand exactly what’s going on.

Some of the characters though look so over the top that they make the wildest American cartoon look somehow tame and as though they’ve been imagined by children rather than grown adults. Japanese animation also seems to feature a lot more human characters than those born of fantasy, which is interesting but not altogether unusual. You don’t see as many animal characters coming out of Studio Ghibli as you would out of Disney or Pixar it seems. I’ve only seen a small amount though so I could be completely wrong. Just from the clip it seems as though the Japanese use a very inclusive method with their animation that allows these fantastical creatures and the regular humans to coincide with one another on a regular basis.

There’s something about a cat with multiple legs, meaning more than four, and a compartment on its back resembling that of a bus, that seems a little strange. I do wonder what kind of imagination the animators from Studio Ghibli are working with, and what inspires them to keep creating their characters in such a weird but refreshing manner.

Like I said, I’m not a big fan but I’m all about the story, so if it’s interesting I at least acknowledge as much.