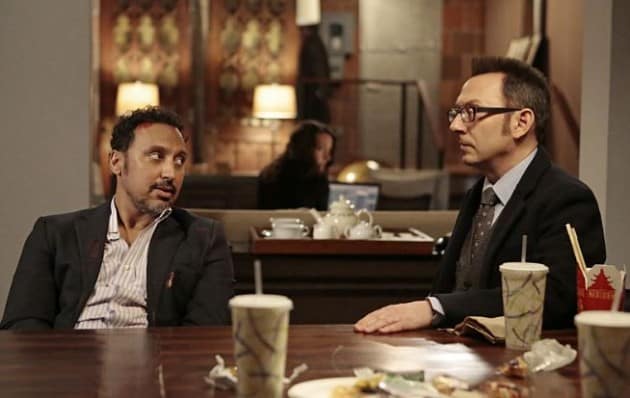 Man, I’ve been worried. I’ve been worried that Person Of Interest, one of my favorite shows currently on air, had lost its fastball. I thought it was about to Tommy Hanson us, and I was starting to freak out a little. But this episode really made me feel better. Things just worked so much better this time around. Several different and interesting plotlines were weaved together in unexpected ways, and the acting and writing were really good, I thought.

Sal Khan (I’ll pour one out for you, dog) was one of my favorite side characters of this season so far. Aasif Mandvi was so freaking good in that role. He made a pretty standard case-of-the-week feel really fresh and exciting, and I haven’t felt that way in a while.

Also, it’s so nice to come across someone who knows about Samaritan, if only tangentially. There is a little bit of frustration of the team being so alone in the world; the only people who would believe them are the ones that are trying to kill them, so to see Khan readily come to the conclusion that an AI responsible is really great.

My only complaint with this episode is that Martine lives still. I can’t imagine she gets to hang around this whole season and not kill one of Team Machine. There was a bit of foreshadowing when Reese says, “You’re right, I should’ve let you kill her,” which worries me. I don’t want Reese to leave the show, and I don’t want Root to leave the show. At this point, I’m okay with the idea of just letting network TV do its thing and rolling back the old crew for ten seasons. I’d miss these characters too much.

But I suspect things are about to change. Not only because we’re running out of episodes, but because I think Martine might be ready for a change. There was a restlessness to her this episode; her mild distaste for Greer when he opened that fifty thousand dollar box of cigarettes was really interesting. Part of what makes Greer such a fascinating figure is that he’s portrayed as a man who sincerely wants Samaritan to protect over everyone. But then he uses those resources to buy a ludicrously expensive box of cigars to celebrate all of the violence and heartache, which was pretty nasty. I honestly think that Martine does actually believe in her cause, and her reaction to Greer smoking the cigar at the end as a man bleeds out at his feet was pretty revealing. Not saying she’s gonna join Team Machine, but there’s a little bit of doubt in her mind, just as there is in Control’s.

Even if Martine remains a threat, Root still beat the crap out of her. We’ll always have the snowy, muddy ground where Root and Martine tried to murder one another.

This was a really good, really interesting episode. I wish there was more of it. For the first time in a long time, I was sad that the episode was ending. Person Of Interest has done a great job building intrigue during this season (the near-perfect stretch in the middle did a good job of that), and I for one can’t wait to see where it goes.

– The Machine had Root steal that case not for the contents in it but the case itself. It’s basically indestructable, which is awesome.

– There were a few cheesy one liners, mostly from Reese, and they felt out of place. But then Reese did one in front of Harold, and Harold reacted like he was so disappointed. I don’t know if the previous one liners were just setups for Harold’s exasperation, but if they were, that was a bit of writing genius.

– Amy Acker is the best. I wonder if she has a name for her fanbase. AckerHeads? Acker’s Packers? Acker’s Stackers? Ack’s Flacks? Amy’s… Stamy’s? I don’t know shut up and leave me alone.

– Can’t wait for next week’s episode.