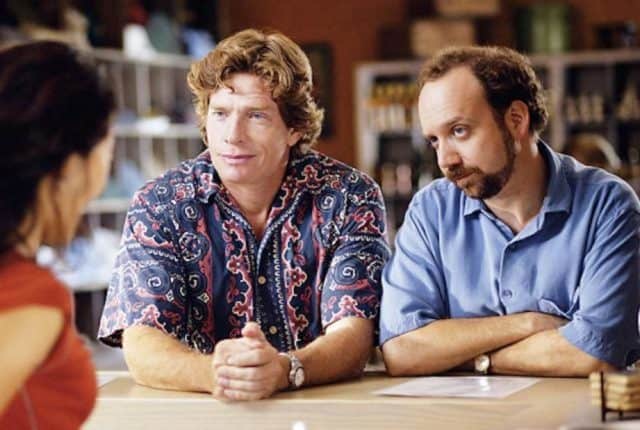 Paul Giamatti seems like he’d be on the cusp of being a leading man but really he’s always been best as a supporting actor. There’s some mentor-like quality about him that stays with the guy no matter if he’s a good guy or a bad guy, it’s just something that tends to stick around him like an aura. It’s a beneficial thing really since it makes him appear quite wise at times and at the very least like someone that should be listened to at others. Despite the fact that he doesn’t have the classically-handsome looks of his costars he’s still one of the guys that you’d gladly be friends with since he seems like someone that could bring value to anyone’s day.

He might not be a leading man but he’s just as important, if not more so, in the positions he’s been in for so long.

As the driver that has to simply put up with the author of Mary Poppins he’s kind of timid and doesn’t say much to start with, but throughout the movie he at least gets his two cents in and kind of changes her mind about the whole idea of allowing her story to be adapted. He doesn’t even have to raise his voice, he simply talks and tells her his story, and that’s more than enough it would seem.

Despite the few inaccuracies of the movie it can be said that Joe was a guy that believed in his fighter and wanted the best for Jim Braddock. It might have seemed that he was putting Braddock in harms way at times but he was truly attempting to make something of Braddock’s career and was there for him whenever the guy needed him. As much as Hollywood glammed up this story it was still inspiring to watch.

When you’re part of a group that cons people for a living you’ve got one of two options available at all times: you stay in and see what comes, or you get out and take your chances on your own. Everything else is just noise and isn’t worth the time. But in this kind of a game where conning the wrong person could get you killed it’s possible that the third choice would be to pull of the con of the decade by convincing the guy’s getting conned that they’ve won.

It’s easy to see how a person that’s directing the control room that overlooks an entire town and a single person’s every waking moment could be called heartless and cruel. But quite honestly his character in this movie isn’t heartless at all, he’s simply an employee doing his job. But when it comes to Truman’s welfare and how he’ll fare on the open sea you can tell that he does care since he doesn’t want to push things too far.

It must have been hard to be a friend to Andy Kaufman, the guy was an eccentric like no other and had a way about him that was hard to understand. But those of his friends that did stick around somehow found a way to trust him and even work with him that few others could.

Paul Giamatti is the kind of guy you’d want to be on set if you were a newbie or just nervous about anything. He seems like he could talk anyone down and help them relax.