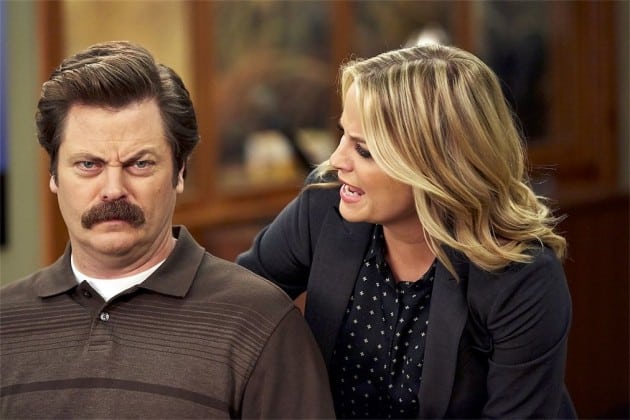 A comedy’s job isn’t to make you cry–it’s to make you laugh. However, when a sitcom creates such memorable and authentic individuals as Parks and Recreation does, they start to feel like a part of your own family, like old friends that you get to see for a few months every year. This is true for pretty much every single character on Parks and Rec, but it may be most exemplified in Leslie Knope and Ron Swanson, who were the focus of last night’s back-to-back episodes.

As I said in my review of last week’s season premiere, Leslie and Ron’s friendship is the single most important relationship on Parks and Recreation. I thought that the writers’ decision to center at least the first part of this final season on the conflict between the pair was an ingenious idea, as it used the three-year time jump to give fans a story that they would immediately be invested in, one that felt fitting as Parks and Rec nears its end. Last night’s episodes, “William Henry Harrison” and the aptly titled “Leslie and Ron,” essentially act as a two-parter (the first half hour even ended with a clever “To be continued…right now”), as the venom unleashed from both of them in the first episode (Ron even tells Leslie she’s not that good at scrapbooking) is all setup for the emotional gut-punch that is the second one.

With no disrespect to “William Henry Harrison,” it’s the two-actor, sitcom play that is “Leslie and Ron” that made last night’s hour of Parks and Recreation such a joy to watch. Amy Poehler and Nick Offerman have always been incredibly talented performers, who both deserve more Emmy love than either of them has ever received, but I’m not sure if they’ve ever been as good as they have been in “Leslie and Ron.” Both of them have the opportunity to show off their comedic chops (I particularly loved Leslie’s improvised lyrics to “We Didn’t Start the Fire”) and dramatic skills (Offerman absolutely nails every single moment of Ron’s story to Leslie).

We finally discover what Morning Star is (Ron had Ann’s house, among others, knocked down to build apartments by the park Leslie had spent so much of her life building), but we soon find out that it was not because of that conflict but what had happened before it that made Ron turn his back on Leslie. In a deeply moving set of flashbacks, we learn how all of Ron’s co-workers and friends (or “workplace proximity associates”) began to leave the parks department, one by one, leaving him alone with a group of new individuals he didn’t recognize, as he missed the ones he had worked with for years.

Sad and lonely, Ron visited Leslie in her new office to set a lunch date with her at JJ’s, so that he could ask her for a job–in the federal government. However, Leslie never showed up for that lunch, as she became too distracted by her work for the National Parks Department (she had to fly out to D.C. instead), and Ron sat there, waiting for as long as he could, before he realized it was time for him to move on, when all he wanted to do was go back to the way things were.

And things do go back–sort of. After he is finally honest with Leslie (and after the two of them look back at their history together, including Ron’s recommendation to hire Leslie and her “Thank You” card to him after her interview), Ron and Leslie repair their friendship, and we get a tear-inducing montage of the two of them drinking, goofing off, and putting the parks department’s office back to the way it used to be (all set to one of Ron’s favorite songs, which was mentioned earlier in the episode: “Buddy” by Willie Nelson).

And if all of that wasn’t enough, “Leslie and Ron” ends with the pair’s friendship not only repaired but rejuvenated, and a final scene that sees a simultaneously drunk and hungover Leslie heading off to lunch with Ron again. The two of them, Leslie’s arm wrapped around Ron, walk out of the office, talking again about how stupid people who don’t like breakfast food are, ready to devour as many waffles and, in Ron’s case, all of the bacon and eggs that they can eat. And no, it’s not the same as it was before. It’s better.

– I know that crying is only acceptable at funerals and the grand canyon, but I think Ron Swanson would give me a pass here, because, my god, what a beautiful episode of television. “Leslie and Ron” is one of the best episodes that Parks and Recreation has ever done.

– Leslie is so upset that she’s going to miss the Game of Thrones series finale. Apparently, Khaleesi is marrying Jack Sparrow. “That show has really gone off the rails,” she says. “It makes sense if you’ve read the books!” Ben responds.

– Andy’s speech to April about how they don’t need to come up with a list of things she loves but of why she loves them was all kinds of sweet and touching and, yet again, shows that there is more to Andy than being the goofy comic relief.

– Ron was truly desperate when he first got locked-in with Leslie, promising the City Hall janitor that he would “watch a foreign film” or “talk to a man with a ponytail” if he helped let them out.

– I really want to know more about this Morgan Freeman and Shailene Woodley feud.

– “Yeah, well I ordered sixty veggie pizzas to Ron’s office so that made me feel better.” I wish we could have seen his reaction to that.

– I just started thinking about the frame that Ron made for his and Leslie’s photo from Ann’s door…and I’m crying again.