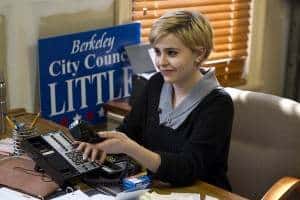 Every Tuesday night, you can usually find me thumbing through my notes on the latest episode of Parenthood, scowling and trying to brainstorm. Though I enjoy Parenthood and consider it one of the best broadcast dramas out there, it can be a little hard to write about, for reasons other than the obvious. Yes, there are usually several storylines ramshackled together with bubblegum and indie pop, but the main reason I often get stuck on Parenthood reviews is the show’s naturalistic style. It may be earthy and refreshingly honest, but it can also lead to me not knowing whether my feelings on an episode stem from character or plot. Parenthood has done such an exquisite job establishing the Braverman family, in all its iterations, that writing about it can feel like writing about your family members; you have to separate your personal, visceral reactions to what’s going on and try to look at the bones of an episode for what they are, nothing more or less.

“Politics”, Parenthood‘s first episode after a two week break, hit that problem right on the nose for me, in that critically I leaned one way and emotionally I leaned another. Most notably, with Sarah and Mark’s ultimate decision to pass over climbing Mount Kilimanjaro and writing in Morocco for the prospect of having a baby, like, right now. I’ve been a big proponent of Mark and Sarah from the beginning, as their interactions feel so easy and earned, but what joy I got from them moving on to the next phase of their life together was quashed by taking another look at their dilemma. Sarah’s a (very impulsive) lady of a certain age, but didn’t she consider having her eggs frozen until she and Mark were truly ready? Or perhaps adopting a child and forgoing any type of concern about her age affecting a child’s health? The talk about a baby for them has always had me a little worried, considering how heavy season 3 has been on the topic, and I’m not a fan of the direction it’s going. Sarah and Mark aren’t trying to have a baby because they’re ready; they’re trying to have a baby because she’s insecure and he’s head-over-heels enough to go along with her. Sarah finding love and getting her life together away from her children has been one of my favorite stories this season, but flirting with the possibility of another child feels like a regression as opposed to progression. There’s so much beautiful material to be mined from single mom getting her children raised and looking ahead to the next phase of her life, finally able to live for herself and put her needs more toward the top of the list. There are other shades of parenthood aside from “perpetually with child” and I wish that Parenthood would explore them through Sarah.

Also causing problems is Amber’s plot, as she and Bob finally consummated their obvious tension through a kiss at work. Up front, I’ll say that I really enjoy them together, but I have a feeling that it’ll be nothing but trouble from here on out for the two. As touching as it was to hear Bob verbalize all the things about Amber that are truly beautiful that we’ve learned over the past 3 seasons, it’s one of those damned if you do, damned if you don’t situations. Amber either goes with her heart and embraces one of the few people that truly gets her, ultimately losing out on a promising job, or she rejects Bob, keeping her career but losing a companion. You want Amber to have the job and the man because of how much she’s struggled to get here, but it can’t be like that, not in the world of politics and not with Bob Little. There’s a certain sadness about Amber’s story that’s appealing, but my only hope is that Parenthood doesn’t take the easy way out and make this into a scandalous plotline. For me, it’d be best for it not to leak and if it has to end, end quietly and cordially; it’d hit a lot harder (and be closer to Parenthood‘s identity) to watch the internal struggle play out intimately, as opposed to on press conferences and newspaper headlines. It’d be painful to watch two good people with promising futures have their lives and careers ruined, especially considering the progress Amber has made from this time last season. 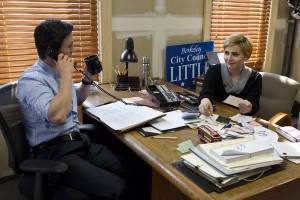 Not every plot in the episode forced this kind of thinking for me, though. I reveled in Zoe’s rebellion from Julia, particularly because it brought reality and human emotion into an plot that’s never been that grounded. One of my main issues with the “Joel and Julia buy a baby” thing is that we’ve not gotten to know what’s been going on in Zoe’s head; last week that changed and we saw the cracks beginning to form at the birthing class, but this week, everything fell apart. It was only a matter of time, of course, considering the fact that Zoe wanted a closed adoption to begin with and she’s now living with the soon-to-be parents of the child she’s giving up. But I’m glad that she took a stand against Julia and Joel, as the two have been so laser-focused on getting a baby that they’ve not really been thinking about anything else. They may be giving Zoe money (out of guilt) and wanting her to move back in, but they don’t care about what the imminent birth was doing to her psyche or how they’ve not had the proper therapy to make this whole thing easier on everyone. No, they only want an 8 lb screaming bundle of joy in their arms; I mean, in “Politics”, did they ever mention any concern for Zoe and her emotional/mental well-being? They fretted about her changing her mind about giving them the baby and that’s it, so having Zoe finally stand up and speak for herself for once was one of the first times I truly felt this plot.

Feelings were the subject of Crosby’s time with Jasmine, as in unresolved feelings on Crosby’s part that were stirred up by his ex wanting to move in with her boyfriend of a few months. (They got together around November and season 3 has been unfolding in real-time.) Even though it ended on a promising note, with Crosby giving Jasmine a peace offering of a handmade doorknob he crafted for their house, I can’t shake the feeling that we’ll be getting a reunion sometime by the end of the season. Jasmine’s reaction to Joe asking her to move in was muted at best, Crosby’s drunk bellyaching to Lilly about Jasmine did some damage to their young relationship, and the final moments between the two were brimming with things unsaid; they’ve been struggling to overcome their mutual feelings ever since their break-up late last season and I don’t think it’s a battle that’s quite over yet. I thought that Crosby was on his way to getting over Jasmine, especially once Lilly came into the picture, but after checking out “Politics”, it’s obvious he’d dump her in a heartbeat if Jasmine asked him back and that makes me sad. The two never had a healthy relationship and never quite gelled, but mainly because it’d cut off a really intriguing well of single co-parenting stories that don’t get explored often on TV. It’d be taking the easy way out to throw them back together and say what you want, but Parenthood’s at its best when it challenges and engages the viewer.

I didn’t hate “Politics”, despite the tone that may emanate from this review; I’m more worried/curious about where Parenthood will be going in its final three episodes of the season. I like certain aspects of every storyline, but none have 100% gelled for me this season and it’s getting down to crunchtime for everything to start hitting on all cylinders. I do have faith that everything will coalesce in a sensitive, thoughtful manner that has been a near-constant for Parenthood, but with several stories teetering between heartfelt and artificial, you can’t blame someone for a little scowling in the meantime.

Thoughts, Quotes, & Observations:
-“Don’t call it a little outfit.”
-“It’s a shame about her face because it’s not pretty.”
-“AKA Panda.”
-“Honey, you’re special. Take that in.” You guys, Sarah needs to be my mom.
-“I love you, too, yay!”
-Here’s a little information about an incompetent cervix, just in case you were curious.
-Pablo Sandoval’s full nickname is Kung Fu Panda.
-Unfortunately, the fear of hot tubs doesn’t have a name yet, otherwise I’d share that, too.
-Kerouac and Burroughs indeed lived and worked in Morocco, specifically Tangier. (Burroughs wrote Naked Lunch there.)
-Mark and Sarah on a bed, giggling at yearbooks exemplifies everything I love about their chemistry.
-Did anybody notice that Kirsten and Sarah kinda sorta resembled one another?
-The only story that didn’t leave much of an impression on me is the Adam/Crosby trip to save Dawes from falling into dastardly sound engineer Brent’s evil clutches. Decent filler, but it was just kind of there and we’ve seen Adam be needlessly sanctimonious enough.
-The guy that plays Bob (Jonathan Tucker) reminds me of Tobey Maguire at times. Do you agree?
-NBC did a Parenthood promo based on TV reviews and guess who got left out? I’m obviously the Susan Lucci of 15 second TV ads.
-Next week on Parenthood: Julia tries not to overly involved herself in Zoe’s life, Bob and Amber go off on a weekend business trip together, Max tries to use his Asperger’s to get out of P.E., and Drew reacts to the possibility of a new sibling.