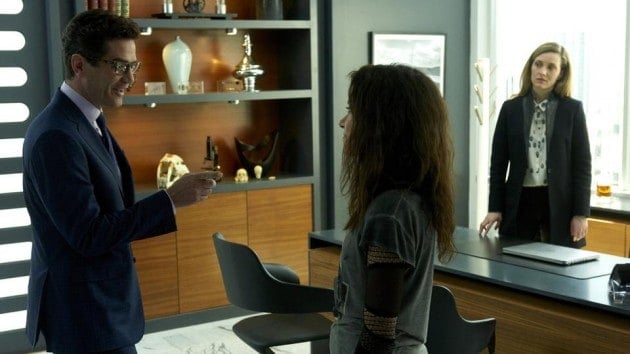 What a thrilling end to the third season of Orphan Black. This episode left me with so many questions that only makes me want the fourth season immediately. However, as the episode made a lot of big moves for the show as a whole, it seemed disconnected from the season overall.

We spent a lot of time focused on Castor and the threat it posed to the Clone Club, but once Sarah and S had their hands on Kendall Malone, the original genome, Castor didn’t seem to matter. We got a significant callback to the earliest season with Neolution and Leekie in this episode, something that hasn’t come up at all this season. Ferdinand also made a prominent appearance and we lost a major character in this episode.

We first see Rachel alone in a room with a new prosthetic eye/camera. After Delphine learns that Rachel in the hospital bed in Dyad is actually Crystal, the doctor reveals that he has worked for Neolution all along. Delphine and the doctor struggle, and we even see a grub of some sort come out of his mouth. Delphine shoots him, and he promises she will die within twenty-four hours.

Meanwhile, Sarah and S make a deal with Ferdinand to get rid of Castor. Using Mark, they convince Victoria that they have Helena in a secure location and lure her to an area where Ferdinand meets up with her. We don’t learn what he does with her, so maybe she will turn up next season. In a search for a weak link in the Clone Club, Rudy encounters Helena, and she kills him. It’s simple, and sad, but at least she killed him in a fair fight, she has grown a lot this season.

When Delphine calls Sarah to tell her that there are internal connections to Neolution within Dyad she surprisingly tells Ferdinand, no questions asked. Ferdinand promptly smashes his subordinate’s head in, and makes a huge fuss about getting him into the acid bath prepared for Kendall Malone. I’ll admit the situation was pretty funny despite how much I did not trust Ferdinand. He’s a violent man, clearly, but whether he is connected to Neolution in some way, I cannot be sure.

Alison has a big dinner with everyone when she finds out that she won the election. (Yay Alison!!!) They all toast to Beth, which feels really cheesy and ridiculous because half of the people present have no idea who she was. Delphine stops by to say goodbye to Cosima, and how heartbreaking! We know that Delphine knows she will die, and this must be a difficult thing for her to do.

Delphine walks away from her car when she realizes a person is following her, she turns and says “What will happen to her,” before being shot, and dying. I can only assume that the “her” Delphine refers to is Rachel, who we see next meeting her mother, Professor Duncan, and the child clone, Charlotte. The final scene is S, Kendall, and Sarah all meeting up with Kira in the snow of Iceland.

The season was pretty solid as a whole, but this finale just felt so disconnected from the main points of the season. Sarah spent two episodes terrified of Victoria, and we don’t even learn what her fate is with Ferdinand. I suspect the next season will follow Neolution on a larger scale, and I hope to see how the group handles Delphine’s death. Overall, the episode warranted plenty of reactions from me, specifically yelling at the television, which makes for a fun season finale at the very least, and for that I’ll give it a higher rating.

– Thank you for not making Maslany an old woman! The chimera explanation from Scott did a wonderful job of making sure that Maslany wasn’t playing yet another odd clone. (Although, I’m sure the science is fairly accurate as well).

– Donnie finding Jesse for Helena was the sweetest thing! I love how Donnie and Helena progressed through the last half of the season.