Home
Television
Once Upon a Time
Once Upon A Time Review: Regina Gets A “Wake Up Call” 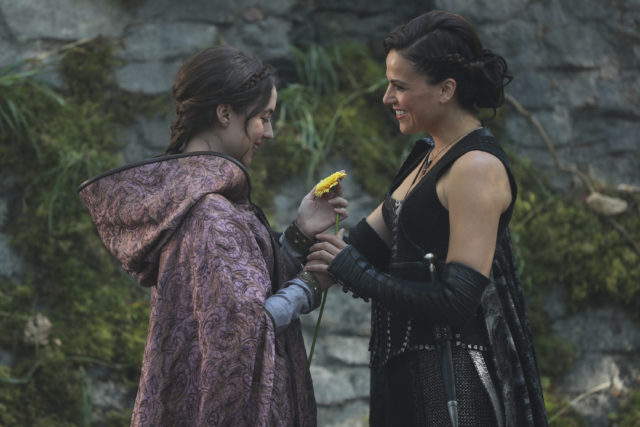 Once Upon A Time has been spending its first batch of episodes exploring the pre-curse-or (get it?) to the Hyperion Heights curse. Some of these stories haven’t been very interesting, but the stories of how some of the recognizable characters arrived in this new curse have been the better stories to date. Of course, some of the new characters have been better than others. This week’s episode explores a relationship that developed between Regina and Drizella in the new realm before the dark curse was cast. Drizella being one of the most compelling new characters and Regina being one of the  most complex in the show’s history, “Wake Up Call” turned out to be one of their best in the new era.

I mentioned in my previous review (of an episode that wasn’t the best) that Drizella/Ivy is one of the most compelling new characters on the show, and Adelaide Kane handles her portrayal masterfully. I thought she was compelling before the show developed her relationship with Regina and made her both sympathetic and turned her into the primary antagonist. I also mentioned in my review last week that I was underwhelmed by Victoria as the primary antagonist, but it turns out that’s because she isn’t! Ivy feels very much like a Regina-like villain, who has it in her to be redeemed but obviously has a lot of fun being bad. Adelaide Kane was the perfect choice for the role and she’s absolutely killed it so far (no pun intended).

Then of course Once Upon A Time still has its oldies and goodies. Regina played such a prominent role early in the series and she held on and evolved because Lana Parilla’s portrayal was masterful. Parilla brings a human element to the long-time caricature of the Evil Queen before realizing that she wants to be better and to have a happy ending. Of course, she still hasn’t really found her happy ending as Henry grows up and leaves town and after the devastating death of Robin Hood, so while seeking it she joins Henry in his new life and develops a kinship with Drizella, who she tries to prevent from turning into the new Evil Queen. That turned out to be a self-fulfilling prophecy, though, as Regina teaching her magic backfired spectacularly. Parilla played the good-guy, mentor, and mother-figure each with such a delicate nuance that she shows all of sides of her character simultaneously. She and Adelaide Kane have strong chemistry and will make incredible opponents for one another as the show goes forward.

The stories Once Upon A Time has told this season have sometimes been inconsistent, but the stories centered on the older characters have been remarkably well executed. “Wake Up Call” was no exception. Lana Parilla and Adelaide Kane both gave strong performances in one of the best episodes of the Hyperion Heights era.

Once Upon A Time Season 7 Episode 6 Review: "Wake Up Call"

Regina’s story from before the curse unfolds, and we explore her relationship with Drizella on this week’s strong Once Upon A Time