Home
Television
Once Upon a Time
Once Upon A Time Review: “Firebird” Reaches The Emotional Climax 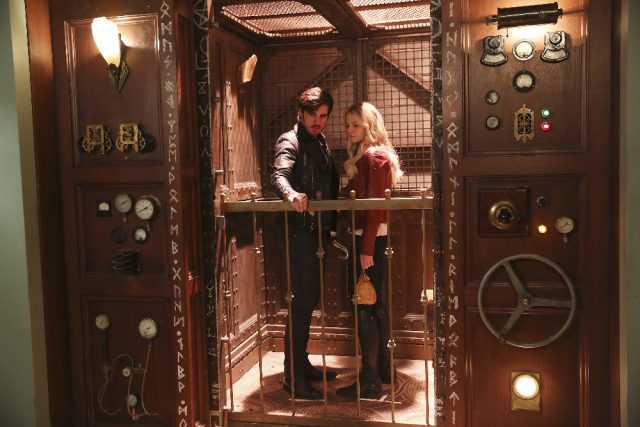 Once Upon A Time is now on the home stretch. With an emotional hour, they’ve set the tone for their final few episodes, with stakes appearing to be at an all-time high. I apologize, by the way, that I couldn’t get this review in sooner. The ne’er-do-wells at my local ABC affiliate decided that continuous weather coverage was a good idea. Like they couldn’t have just preempted the commercials?

This week on Once Upon A Time: Hades rips up Rumplestiltskin’s contract to get Zelena back. Affected by true love’s kiss, Hades gives Emma and the others a clue about saving Hook, and takes their name off the grave stones. Emma and Hook race for the cure (see what I did there?) and their love is tested. In the flashbacks, Emma is caught for her crimes by a private investigator, who turns out to be a helpful friend. Rumplestiltskin faces off against his father. Henry helps people with their unfinished business.

Obviously, there was quite a bit of action in this week’s episode. Everything started to come together as the Underworld story (mostly) concluded. Emma and Hook clearly have unfinished business, and the story will continue, but now everyone (save Hook) is topside. I have to admit, I approached this episode with a cynical attitude. I was sure that they were going to find a way to bring Hook with them, and cheat death, just because he’s a main character and not because it made sense to the story. I was ready for him to join them in their fight against Hades in Storybrooke. But, it seems my expectations were exceeded. Hook stayed behind, and it turned into an incredibly powerful, emotional moment. Jennifer Morrison and Colin O’Donoghue had probably their best scene together in the series so far, and the unsatisfying conclusion to the “Save Hook” journey made the whole season that much more compelling.

Now if the rumors are true, someone isn’t going to make it out of this season, and smart money’s on Hook. But it can’t possibly be that simple, can it? Of course, just the fact that the stakes are high enough to lose a main character is great. This show has a huge cast, and it really needs to thin out a bit and focus more on the characters that it has. But, I have no clue who will be the one to go at the end? Anyone have any guesses?

I appreciated what they were trying to do with the flashbacks in “Firebird”, but I really don’t think they were necessary. I would like to have spent more time with Rumple, Peter Pan, and Robin Hood than find out how Emma got her “armor”. It was a good story, but felt truly out of place in an episode with the stakes so high.

Once Upon A Time has its faults, that’s for sure. “Firebird”, however, was the show at its (near) best. There were great performances, a story that gripped and didn’t pander, and a few plot twists to keep the fire burning until the end of the season. Honestly, based on my expectations, I was going to beat up this episode a little bit in my review and I just couldn’t. It exceeded all of them.

Once Upon A Time Season 5 Episode 20 Review: "Firebird"

Hook and Emma race against the literal clock to try and find a way out for everyone, in this week’s gripping Once Upon A Time.