Home
Television
Once Upon a Time
Once Upon A Time Review: Find Out What Makes “The Black Fairy” Tick 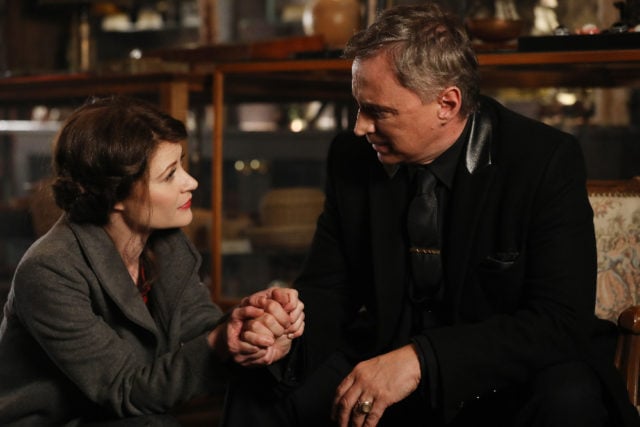 Emotional character episodes are coming in pairs for Once Upon A Time lately. First, Zelena gets an episode leading up to making a tremendous sacrifice for the cause. This week, Rumplestiltskin finds out why his mother abandoned him and his original destiny. Though the two episodes seem to have very different endings, the cathartic, character focus remains the same. It’s really fun to explore two dark characters and see the variety of outcomes they can achieve.

This week on Once Upon A Time: Rumplestiltskin awakens the Blue Fairy, who is immediately swept up by the Black Fairy. In the dream world, Rumplestiltskin, Gideon, and Emma seek out Rumple’s past to help them defeat the Black Fairy in the present, and they find out why he was abandoned. The Charming family makes final wedding preparations. Zelena adjusts to life without magic.

I was surprised to find Zelena in this episode at all. Like I said, the last episode seemed pretty “final” in her department. But, they’ve found a way to include her that is both interesting and essential to the plot. Now, I can’t imagine an episode where the Black Fairy doesn’t get run over by Zelena in a station wagon. Someone with magic adjusting to life without it is compelling, and I’m completely sold on keeping Rebecca Mader on the show forever.

Ultimately, this was a character study on Rumplestiltskin and it was incredibly compelling. Though at the end of the episode he (spoiler) turned out to be exactly the same as he’s always been and aligns himself with the Black Fairy, arriving there was a deep, emotional tale. Though Robert Carlyle has long been one of the best actors on this show, this episode was easily his best. He’s always been a wildcard, but exploring that he used to be destined for the life of a savior and that his mother made decisions exactly like his to protect those she loved added so many layers to his character. I went into this episode expecting to write it off as a filler, and I was enthralled at every turn.

Overall, there was a lot to like in this episode. You could still call it “filler” by some standards, but it was such a strong character study that it didn’t matter much. Of course, we’re all really just ready to get to the musical episode next week. So let’s just check back about that time, OK?

Once Upon A Time Season 6 Episode 19 Review: "The Black Fairy"

Rumplestiltskin explores his past and why his mother abandoned him, on this week’s compelling episode of Once Upon A Time.