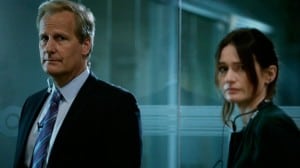 I want to keep doing the news–let’s play The Newsroom.

A faceless bureaucrat (let’s call him, Sidney Falco) ambles into Aaron Sorkin’s office. He holds in his hands the finished copy of The Newsroom‘s season finale. “Aaron,” he says while waving briskly at the figure behind the desk. An exasperated Aaron Sorkin slowly swivels away from the screen of his desktop and sees Sidney. Sidney holds the script aloft and smiles.

“Well Aaron, it’s the finale. I see that you’re juggling all of these other storylines–you’re doing a great job, by the way. You’re the man– but we need to think about priorities here. We need a game changer. We need something to get the kids talking, something that sparkles. Hey, you know what sparkles? Diamonds. Yeah, so let’s see if we can get a marriage proposal into the script. Sounds good? Good.”

Seriously, that proposal was shamelessly shoehorned into “Election Night, Part II.” It felt like a convenient way to end the season.* Will’s arc has mainly been about a conflict of his public self and his private self. He has been very deliberate about the way he portrays himself on TV, for the approval of the audience has been increasingly paramount to his perceived livelihood.

*Ditto Maggie’s reunion with Lisa. Was anyone clamoring for these two to reconcile? It’s cool that Maggie has a confidant, but the emotional impact of this was infinitesimal for me. Can Lisa please move to Europe?

Now, you could argue that–by the season’s conclusion–Will succeeded in breaking down the walls of his public self and private self, that he finally realized what his heart knew all along or whatever. It’s not necessarily unbelievable. Also, in the real world, people get impetuously hitched all of the time, thinking that marriage may serve as some glorious panacea (note: It doesn’t).

But the real world can be infuriating sometimes, and it’s the same reason why Will’s proposal to Mac is infuriating: It was unearned.

“There was hair on the bathroom floor.”–Lisa

On a sunnier note, I was once again delighted by everyone’s erumpent fascination with Maggie’s new hairdo. I don’t understand it, but there is something oddly captivating about ACN’s universal obsession with Maggie’s hair. I suppose it’s awfully considerate. Sure, it’s more than reasonable to want to inquire about her mental state, considering what she has been through, but why does the haircut always appear to be the culprit? Can a girl try out a new look around here? Seriously guys, leave Maggie’s hair alone! For the record, I think you look super cute, Maggie.

We also learn that Leona has suddenly decided to defer to her son, Reese, in regard to the lawsuit with Dantana. She was so passionate about fighting this just two episodes ago, but I’m not going to try to understand this character. And it’s cool: I don’t need to. She’s a fun sideshow. Subsequently, Reese also does a 180 on this and tells Charlie that he isn’t giving in: The lawsuit is a go.

I mentioned last week that I’m not a fan of these part one/ part two installments, but viewed as a whole, this isn’t all bad. As usual, I like all of the Maggie and Jim segments. (In case you missed it, Jim’s blunder with the Michigan race ended up coming true: Benishek won the race.) I also enjoyed Charlie arguing with Reese over who gets the credit for taking on Dantana in court. It’s just that The Newsroom went completely out of its way to deliver these end-of-the-season moments that were totally gratuitous.