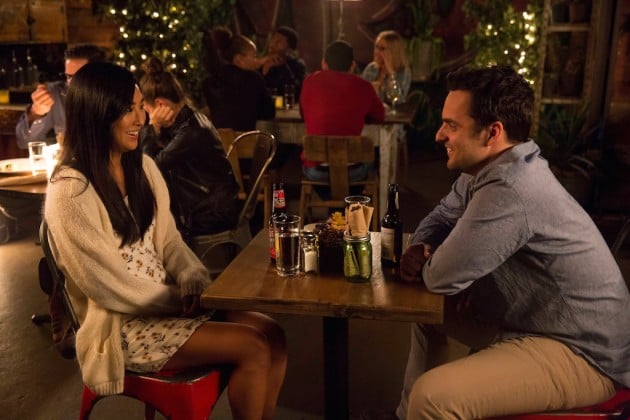 Well, Season 4 had to have a clunker sooner or later, didn’t it? I’m not really sure what to say about “Girl Fight,” except that it was a considerable step down from last week’s “Thanksgiving IV” and, overall, just a very “off” episode of New Girl.

“Girl Fight” committed a double sitcom sin last night. Not only was the episode not very funny (I think I maybe laughed out loud once or twice during the whole half an hour), but it also didn’t remain consistent with the show’s established characters or offer up anything new or interesting about them. Like I said, everything was just very “off.”

Centering the episode on a fight between Jess and Cece was a perfectly fine idea; their relationship is one of the longest and strongest on New Girl, and Zooey Deschanel and Hannah Simone don’t get to share the screen enough, in my opinion. However, the fight between the two of them was so stupid and superficial (and I know it was supposed to be) that I really didn’t care from the get-go, not even when the show tried to make it all about their past passive aggressive fights. We’ve seen Jess and Cece argue before and be very open with each other when something’s wrong; both of them now fake complimenting each other and having emoticon wars doesn’t jive with what we’ve seen from these characters in previous seasons.

Just as odd as the Jess and Cece fight was the whole “guys have to punch each other” idea that New Girl was trying to push. Again, we’ve seen Nick, Schmidt, Winston, and Coach all get into fights before, and this idea of “I hit you once–then it’s over” has never been something that has been shown. These four guys are some of the most talkative, neurotic dudes around, and as much as New Girl may want to try to convince us that they don’t talk about their feelings or problems, it can’t: we’ve seen them all act differently before.

What last night’s New Girl really seemed to be attempting to do was give a humorous commentary on stereotypes about men and women. When guys fight, it’s all about masculinity and strength; for women, it’s a competition to see who can secretly insult the other more until it eventually blows over. What happens when we flip those stereotypes around? This idea could have worked if the episode’s story had been in line with what we know about New Girl‘s characters, but the fact that it pretty much neglected character consistency (and wasn’t all that funny) led to a mediocre episode, aspiring to be something better.

In what has been a stellar fourth season so far, “Girl Fight” is one misfire in an otherwise pretty flawless string of episodes for New Girl. Here’s hoping that the show can’t get back on track next week for its Christmas-themed installment and end 2014 on a stronger, more satisfying note.

– One thing I did enjoy this episode was Nick’s new relationship with Tran’s granddaughter, Kai (Greta Lee). The reveal that she was rich was pretty obvious, but it didn’t matter because of how good the rest of the storyline was. My favorite moment: Nick saying that he’s going to grab them some more blankets, then picking up the newspapers.

– It’s interesting that both Jess and Nick are dating new people that are, essentially, the male and female versions of themselves . I’m guessing how much each of them has in common with their significant other will end up leading to the downfall of both relationships.

– Another character inconsistency: since when does Nick iron, even for special occasions?

– Nadia returns this week! And she’s pregnant! That was another episode highlight. Just like Tran, I’ll never complain when Nadia shows up on New Girl.

– Okay, Schmidt getting aroused by all the fighting at the baby shower was pretty funny, too. As was Coach’s flashback to him and his three sisters.

–  “I went back and I bought the purse because I love it. I love purses, and that doesn’t mean I’m not a feminist, either. I’m a damn feminist who loves purses. Where else am I supposed to keep my feminist writings?“

– Nick understands how Kai has acquired all her money: “It’s a scam called ‘consulting!’”

– “Everyone gives bums cans, but how are they supposed to open those cans, Nick?”