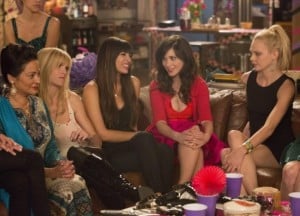 New Girl is not your typical sitcom. While its main purpose is to make its audience laugh (like all 30 minute comedies try to do), it’s not simply the jokes and the gags that keep viewers coming back to New Girl. No, instead of one-liners (no matter how perfectly they are delivered) and wacky situations, New Girl‘s core audience wants to see if Nick and Jess can figure out what their relationship is, or if Schmidt can win back Cece, or how one of the roommates will come through for their friend in the clutch, when he or she really needs someone there. New Girl is a comedy, and a lot of the times, it’s the funniest sitcom on TV. However, this show does not revolve around how many douchey comments Schmidt can make per episode or the goofy quirks that Jess possesses. New Girl has two central components: romance, and, most importantly, friendship. Despite its inherent wackiness, New Girl, at its best, is a show that has real and vibrant characters, and it cares about them and provides them with honest and interesting interactions that shed new light or perspective on who these people really are. In this week’s episode, “Bachelorette Party,” New Girl abandons much of the serious character work it has done this season for laughs, and while this episode is still very funny and enjoyable, it does not rank up there with some of the second’s season’s best.

The two characters that New Girl treats the best this week are Schmidt and Cece, and even though I’m a huge fan of all the Nick and Jess moments that we have gotten in recent weeks, it is refreshing to have the focus placed back on two of the show’s other core characters. Both Schmidt and Cece are allowed to have moments of revelation in “Bachelorette Party.” Schmidt’s reality check from his ex-girlfriend, Elizabeth, about she misses “The Big Guy” version of Schmidt and hardly recognizes the shallow, body image obsessed person in front of her was a great moment for Schmidt’s character. He’s been told of his lack of care and compassion by many people before, but Elizabeth’s raw honesty and specific examples of how he mistreated her truly make an impression on him. When Schmidt apologizes (yet again) to Cece near the end of the episode, or when he apologizes to Elizabeth at the episode’s end (and is thus forced to gorge on pizza), these moments feel genuine and earned by what we know about Schmidt. He is a good guy, with real depth, but he sometimes falters in the face of his own insecurities and selfish desires.

Meanwhile, Cece’s acknowledgement of how fast things are moving with Shivrang and her decision to still marry him also maintains the validity of her character as well. For the past two seasons, Cece has always let her worries and doubts cloud her judgment, like when she was secretly sleeping with Schmidt and did not want to admit her true feelings for him. Cece’s concerns have always restrained her from possessing the happiness that she desires, so it makes sense that she would want something quicker and less emotionally messy. In moving forward with Shivrang and marrying him, she can dismiss any pessimism or discontentment and find solace in the fact she will soon have a husband and (hopefully) children. As we have since “Eggs,” Cece wants to be with someone who is mature and ready for the “next big step” in life, and she believes that Shivrang is that man, even if she doesn’t know how to properly pronounce his name. Even if she doesn’t really know what she’s doing at all. 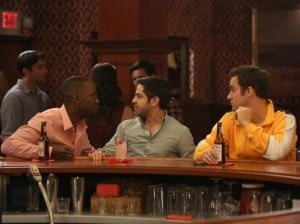 – Not much on Nick, Jess, and Winston this week because, quite honestly, there’s not too much to say. All three of them provided much of the comic relief in this episode, through Jess having Cece’s bachelorette party and Nick and Winston’s “kidnapping” of Shivrang, but no big changes or developments for any of these three characters. Except for the fact that Nick has stopped “wearing Schmidt” and is know embracing the “Sue Sylvester” tracksuit style.

– Like Tran and Fancyman last week, we get another return of a New Girl favorite. This time it’s Cece’s model roommate, Nadia (AKA my second favorite character behind Tran). Her best exchange tonight was with Schmidt, where she bluntly says, “Hey Jew” as Schmidt walks into the loft, and he responds, completely unfazed,  “What’s up, Nadia?” I hope she’s around for more episodes this season.

– Poor Alfredo. First, he dresses as an ice cream man instead of as some sort of Italian chef. Then Jess tells him off, and finally, we find out from Schmidt that he’s standing alone, by himself, crying in the elevator. Poor Alfredo, the sweet, confused stripper.

– Nick’s “dead dad pass” joke was funny, especially in the opening tag when he used it to tap dance and also when he tried to use it to take a picture of Shivrang’s penis for Cece. I can’t believe I just wrote that as a sentence.

– Really liked the “maid of honor” scene between Jess and Cece at the end. The New Girl writers have always done such a great job at reminding us why these two are so close.

– I really enjoyed Elizabeth’s character. I hope she sticks around. So many of the college flashback scenes on New Girl are used simply for laughs, but it would be great to have someone who knew the “Old Schmidt” and could call him out on his crap, aside from Nick and Winston.

– Winston takes kidnapping Shivrang too seriously, because he’s Winston, and he sucks at pranks. Also, it allows Lamorne Morris to deliver lines like “Rough house him a little bit, leave out in the desert so he don’t breathe no more?” so I’m good with it.

– These two lines about Nick’s tracksuit: “I’m sorry, Nick, I didn’t recognize you. I thought you were Jane Lynch.” — Shivrang to Nick. “You look like a homeless pencil!” – Schmidt to Nick.

– “I once figured out Alyssa Milano’s phone number but just randomly picking out numbers.” — Schmidt, proving how he can make anything happen.