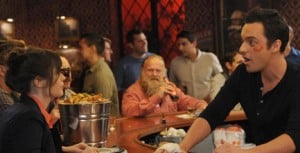 Ever since Nick and Jess kissed in “Cooler,” New Girl has raised the quality of its superior second season to an even higher level of excellence. The writers have been dealing with Nick and Jess’s relationship in a realistic, humorous, and emotional manner that has led to some of the best moments that the show has produced to date. After the final great five minutes of tonight’s excellent episode of New Girl, “Quick Hardening Caulk,” I think I can add another best moment to the long list that New Girl has quickly created in the past few episodes: Nick and Jess’s shouting/making out fight, which was equal parts funny and sexy. These last few moments of the episode are what New Girl does better than any other show on TV; it mixes the wacky and zany with the true and heartfelt, culminating in some really wonderful television.

The main story in tonight’s episode involved Jess finally dealing with her feelings for Nick openly. As Jess tells Cece near the beginning of the episode (“I want him. I want him bad.”), her feelings for Nick have grown into something that she can no longer ignore or deny, as Nick has begun to show more signs of maturity and responsibility. The New Girl writers wisely use Jess’s struggle to provide some great comedic material for Zooey Deschanel. This truly was a great episode for Jess; from her reaction to Nick telling her that her dress is nice and her open-mouthed gazing at his chain-pulling at the hardware store to her painkiller induced proclamations of wanting to sleep with Nick and her Judy Garland impression (“Read all about, I’m Judy Garland!”), Zooey Deschanel nailed every single scene and had me roaring with laughter.

Now, getting back to the episode’s final moments, which were really something special in my opinion, Nick heads back to the loft to talk to Jess after she discovers that he has been sleeping with his boss, Shane (played by the gorgeous Odette Annable). What follows between the pair has its share of funny moments, from Jess insulting Shane’s name (“Who’s next? Cody? Tex? The sheriff?”) to Nick’s belief that he can clean up the broken aquarium with paper towels, but what makes the make out/fighting session between Nick and Jess so important is that it represents a turning point for the pair. Jess finally admits her attraction to Nick, and Nick chooses Jess over another woman. They would rather be with each other rather than anyone else, and no matter how destructive their possible sleeping together or potential relationship could be for the loft (it has already claimed the life of one fish tank, after all), Nick and Jess prove in this moment that, despite their bickering and slamming of doors, they are willing to make a go at it. 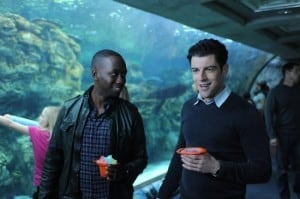 – The B-plot of this New Girl episode involves Schmidt and Winston attempting to catch a lion-fish, which, as Schmidt explains in the hospital after a jellyfish stings his face, is an obvious metaphor for his relationship with Cece. This storyline provided a lot of great lines (which are documented in the best quotes of the night section) and a really good scene between Winston and Cece, where he tells her to give Schmidt some space because her presence is only hurting him. This scene did a great job in showing the strength of Winston and Schmidt’s friendship and the connection/love that Cece still feels for Schmidt. Like has has to let her go, she must let him go, at least for now.

– The list of highly suggestive items that Nick needs at the hardware store, leading to a very flustered Jess: “long-shafted drive gel, new nut wrench, quick-hardening caulk, and lube for drill shaft.” Thank you, New Girl writers, for this entire scene in the hardware store.

– Winston is the only member of the loft who leaves this episode with no facial injury. Jess gets clocked in the chin at the hardware store; Nick receives a shiner from a drugged-out Jess; and Schmidt suffers from his aforementioned jellyfish sting. He probably remains unhurt because he is the only one in an actually somewhat stable relationship.

– As gross as the joke may have been, I couldn’t stop laughing at Winston’s response of “I know this is a dumb question, but will a number two help?” when Schmidt asks for him to pee on his face.

– Loved the fact that Schmidt failed to throw the lion-fish back into ocean. Remind anybody of a certain character from a little show called Arrested Development?

– Also loved the small, subtle joke of the aquarium worker having a spare hat and putting it on after Schmidt steals the first one that he is wearing.

– Of course Schmidt would get drunk off of melon-flavored liquor (that has such little alcohol in it, it is even okay for pregnant women to drink it).

– Why is Nick suspicious of fish? “They breathe water.”

– “When did you become a Bond villain who couldn’t afford not to live with roommates?” – Jess to Schmidt after he brings home a fish tank for the loft.

“If I was a gold digger, do you think I would be interested in you? I’d be the worst gold digger in the world!” – Jess to Nick.

– “An aquarium the size of a sixth grader just broke and you’re going to get paper towels?” – Jess to Nick.

– “You don’t wanna wait forever for that caulk to harden.” – Nick to Jess. Such an easy joke to make, but still so funny.

– “I feel like Russell Crowe in every movie he’s been in.” – Nick to Jess at the hardware store.

– “Cece, the woman? You can’t put a woman in a fish tank, Winston. It doesn’t make any sense.” – Schmidt to Winston.