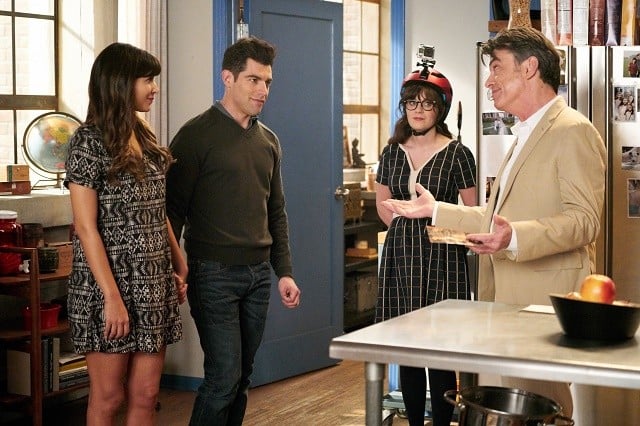 Out of all the ways that I thought New Girl could introduce us to Schmidt’s dad, having Jess drink wine, eat cheese, and then make out with him wasn’t one of them. Just writing it out now, it seems like some type of bizarre, fan-fiction-like storyline; however, the New Girl writers are somehow able to make it work in “D-Day,” another terrific episode of what has been one New Girl‘s best seasons yet.

“D-Day” is easily one of the funniest episodes of New Girl Season 5. From Nick and Winston’s conversation about balls (Winston takes care of “the city’s balls”) to Schmidt’s unorthodox methods of organizing (his groomsmen are his “Magenta Men”), there are countless moments throughout the half hour that had me laughing so hard that I couldn’t even take down notes. And anytime an episode of New Girl is as wacky and funny as “D-Day,” I can typically overlook its flaws because of how much it made me smile.

Thankfully, this week’s New Girl is more than just a collection of sight gags and punchlines. There’s real heart to both of the stories that the show is telling in “D-Day,” and each one of them, for the most part, has enough room to fully develop and work in an emotionally satisfying way.

As someone who absolutely loved Peter Gallagher as Sandy Cohen on The O.C., it was terrific to see him on New Girl playing a very different type of father. Schmidt’s dad, Gavin, hasn’t been around for most of his life, and even though Schmidt has invited him to numerous events throughout the years, he’s never shown up to one, which is why Schmidt is so hesitant about asking Gavin to come to his and Cece’s wedding. Schmidt’s past with his dad was hinted at when his mom, Louise, came to visit in the Season 4 episode “The Right Thing,” but actually getting to see the two of them interact onscreen provides a deeper, richer exploration of Schmidt’s character and the path that led him to become the person he is today.

Furthermore, the touching moment between Schmidt and Gavin works because New Girl doesn’t try too hard to make it a “big moment”; the series knows that these two characters haven’t earned a full resolution yet, and that this small reconciliation is only the first step. Gavin apologizes to Schmidt, who watches him through the camera Jess is wearing, before he finally comes out to see his father, who tells him that he seems to be a very different man than he is and how that’good thing.

But, of course, the two men do agree on one thing: the font on the wedding invitations, as Gavin chooses the second font, being the only person to like it other than Schmidt. That initial exchange between Schmidt and his roommate about the invitation fonts, which is mostly played for laughs earlier on in the episode, ends up playing a major role in the emotional scene with his father, as he gives Gavin the invitation after he comments on the font. That’s strong, smart writing.

The comedy of Schmidt’s storyline plays into the more emotional aspects of it as well, and the same can be said for the B-plot with Nick and Winston, who try to prove how difficult their jobs are to each other. There are tons of laughs to be found in this story, including small, throwaway gags like Nick talking about his bills or Winston searching for his sunglasses, and it’s a lot of fun watching Winston try to manage the bar and Nick freak out after a criminal runs right at him while he sits in back of a cop car.

However, as Aly points out, Nick and Winston’s contest, and essentially the entire storyline, is just a fun distraction from what’s really going on here: Nick trying to prove to Winston that he’s matured. The evolution of Nick Miller has been a continuing storyline on New Girl ever since his break-up with Jess near the end of Season 3, and it’s so satisfying to have not only other characters recognize that Nick has grown but to have him notice it as well. As shown by his ridiculous contest with Winston, Nick is still the same goofy guy that he’s always been, but he’s also changing in the right ways, in ways that make him, to me personally, the best and most enjoyable character to watch on New Girl.

“D-Day” is a fine example of what New Girl does better than almost any other sitcom out there: combining hilarious humor and authentic emotion. The series tells rich stories about this group of friends as they deal with the up and downs of life in a real and incredibly fun way, and for a show that’s halfway through its fifth season, that is no small feat.

What did everyone else think about tonight’s New Girl? Comment below and let me know.