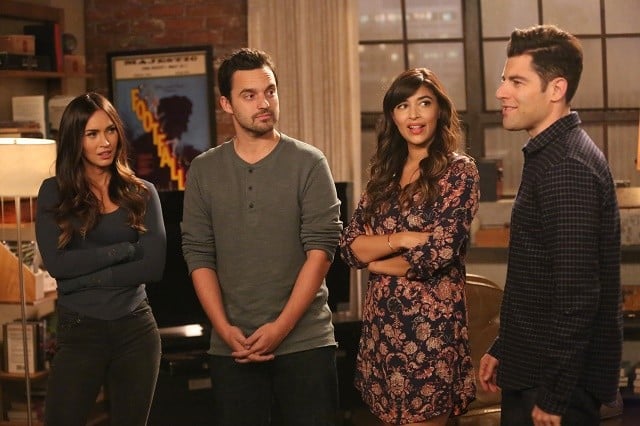 There’s not really much to tonight’s New Girl, and I don’t mean that in a bad way. “Wig” is another goofy, wacky half hour in what’s been easily one of the sitcom’s funniest seasons to date, and while it’s light on story, primarily focusing Nick’s crush on Reagan, which began last week, it made me laugh just as much, if not more than “Bob & Carol & Nick & Schmidt,” which remains my favorite Season 5 episode so far.

As mentioned above, Nick’s attraction to Reagan only intensifies in “Wig,” so much so that he’s constantly heading into Schmidt and Cece’s room to get advice and, of course, eat. However, Nick’s interruptions keep preventing Schmidt and Cece from sleeping together, and so in order to ensure that they get more privacy, they try to convince Nick that Reagan has some type of “defect” that will make him not as in awe of her goddess-like qualities. What they come up with is that Reagan wears a wig, but Nick’s need to investigate only ends up causing more problems, as he searches through Reagan’s room without asking, looking for more clues about who she truly is.

Nick attempting to learn more about Reagan nicely ties into Winston’s efforts to get her to become a part of the group. Of course, though, since this is Winston we’re talking about, his plan backfires after he gets in the middle of Reagan’s relationship with Camilla, a girl that she wants to break up with but can’t find the words to do it. This conflict reveals even more about Reagan than what we learned about her in last week’s episode, mainly that she doesn’t handle intimacy well and doesn’t like to hurt people’s feelings. Even though Nick is scavenging through his new roommate’s room for answers about who she really is, it’s Winston that actually gets her to open up more and even confront her fears when she’s forced to break up with Camilla after she comes to the loft demanding answers.

From start to finish, “Wig” is filled with wonderfully hilarious scenes, such as the flashback of Cece trying to make a bed and Nick listening (and singing along with) BeyoncÃ©. Even smaller moments, like the way Schmidt calls Nick “poor thing” for thinking an orange has layers to Winston calling a Shirley Temple a “virgin Denzel,” are funny and memorable and help ensure that there’s hardly a laugh-less moment throughout the entire half hour. Furthermore, Megan Fox delivers an even better performance than the one that she gave in her debut episode last Tuesday, as Reagan begins to really feel more like a part of this strange, riotous world.

And speaking of Reagan, the New Girl writers do a really great job of giving her some more depth and vulnerability in “Wig.” She’s not simply the strong, tough-talking girl we met last week; as Nick says when he incorrectly compares her to an orange, there are layers to her.

Plus, her interactions with Winston, along with his conversation with Camilla, work as more than just punchlines about the various break-ups that he has suffered throughout the years. Sure, when he says that he’s been dumped 47 times, it’s supposed to be funny, but Winston’s ability to not only connect with Camilla but to also help Reagan deal with her fear of emotional confrontation helps balance out the ridiculous, almost cartoonish parts of his character. Not to mention, Lamorne Morris is almost as good in those scenes as he in when he gets to be “Crazy Winston.”

Fox’s Reagan will likely only be on New Girl for a couple more weeks (I believe her last episode is Episode 9, but I could be wrong), but it says a lot about her performance and the character that the writers have created that I’m already upset about her looming departure. I never would have thought that Fox would have been able to fit so seamlessly into the wacky back-and-forth that comprises most New Girl episodes these days, but the different energy that she provides as Reagan has been a fun change for the series. It’s helped keep New Girl and its characters fresh and entertaining, and where you’re in the fifth season of any show, that’s not an easy thing to do.

What did everyone else think about tonight’s New Girl? Comment below and let me know.

Nick and Winston try to learn more about Reagan in an entertaining episode of New Girl.