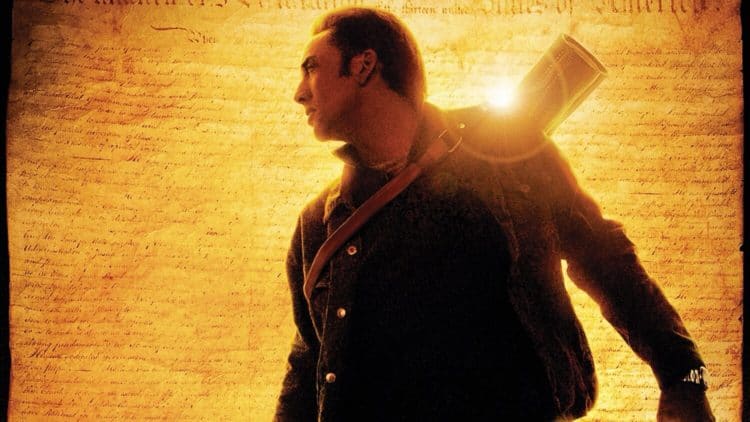 How many people went looking for the ‘clues’ that were unveiled during National Treasure after the movie was over and done with? Was anyone that gullible? There are a lot of things that one can find out from the history of the United States, and a lot of secrets that the country is holding one reason or another, but it’s not likely that there’s some great, hidden treasure buried beneath Washington DC since a secret of this magnitude isn’t something that many people could keep. Of course, many people would claim that of course the government can silence, discredit, and keep quiet anyone that dares to speak the ‘truth’ of this, but the fact is, people aren’t perfect when it comes to keeping secrets since somehow, someway, things have a way of coming out in the end, and something like this wouldn’t be a secret for as long as people want to think. Benjamin’s plan to steal a priceless artifact of American history is doomed to fail from the start since not only does just waltzing into the preservation room work like that, the fact is that even the minor handling that was done in someone’s dining room would damage it beyond repair, and applying lemon juice and then heat to it could possibly make things worse. Of course, I could be completely wrong on this, but the fact is that old parchment from well over two hundred years in the past isn’t bound to grow stronger with age.

And the many clues that are hidden around the city? Why in the world would the founding fathers make it so easy for someone that knows what to look for? Historians and people such as Benjamin wouldn’t be the only ones that might want to find the hidden treasure, especially since there was officially no price put on the artifacts hidden within the depths of the tomb. Then there’s the idea of what happened if the bad guys found the treasure. How in the world were they planning on getting it out without being noticed? A bucketful of trinkets here and there might not be noticed as easily, but the statues, the scrolls, the bigger items that would require conveyor belts or people taking them out continually, that would be easy for a lot of people to notice, especially considering the location they were coming from. Even staging a construction site wouldn’t be something that could be believable since the bell had already been rung on the search for Benjamin which meant the heat was on the bad guys as well.

This movie was entertaining but at the same time it was a bit frustrating since it wanted us to believe in the fantasy that Benjamin was pushing since the idea of there being clues that would lead to a mysterious and continually growing treasure that was moved here and there by the Templar knights is something that sounds great in a movie, but in history sounds a bit ridiculous. Amazingly, some of the ideas in the movie have been verified by some that would know just how realistic they were, but it’s also not likely that the many variables that would have gone into the theft of the Declaration of Independence would have settled in just the right way for Benjamin and his companions to not only steal the document but also to find the treasure. That was kind of by dumb luck to be certain since the whole X marks the spot theory is what they essentially settled on. Another point to be made, among the many that a nitpicking individual would find great joy in pointing out, is that the oil in the reservoirs that existed in the treasure room would never have simply lit like this since after 200+ years since that liquid would have likely snuffed the torch but never have ignited as it did. National Treasure is a nice conspiracy tale that might get people interested in learning more about the Templars and whether or not there is any veracity to the idea that they did in fact visit North America that long ago to drop off a vast treasure. But considering where it was located, the treasure would have been located quite some time ago.

Stories such as this are often popular since they force a person to think outside of the box that so many others tell them to exist in, and it’s exciting, it’s thrilling, and it makes it possible for people to believe that there’s more to this world than what we see and hear about on a continual basis. While this is true since there’s plenty out there to experience, the truth is sometimes far more mundane than Hollywood likes to make it appear. It’s fun for a while, but eventually, it’s time to come back down to reality.