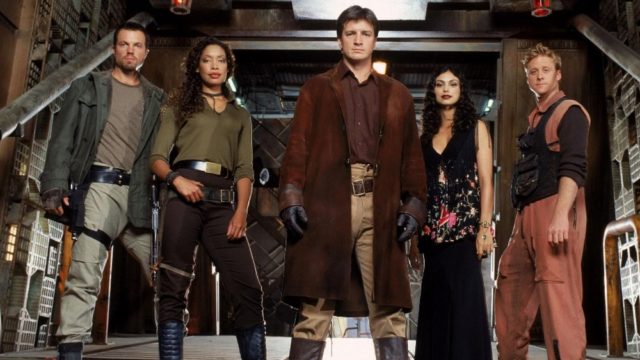 In the history of shows that only lasted on fateful season, Firefly remains and will always remain one of the most popular of all-time.  Ever since the show was cancelled the legion of devoted fans of Firefly have been begging for the show to come back.  While it’s highly unlikely that we’ll ever see the show on TV with its original cast, fans are clinging to the “you never know” theory.  However, there’s one cast member who seems to love teasing fans and getting our hopes up:  Nathan Fillion.

He recently posted a photo of a little Firefly mini reunion with Alan Tudyk and Morena Baccarin. The photo came with the teasing caption, “What do you want to believe we talked about?”  Obviously we’d like to believe they’re all talking about a Firefly resurrection to start airing this summer, but clearly there’s absolutely zero clue what the hell is going on here.

Tudyk’s got too much going on and Morena Baccarin is way too big a star right now to do a Firefly show.  Still though, like I said, the “you never know” is enough to keep hope alive.  And remember Red, hope is a good thing, and no good thing ever dies.

Check out Fillion’s snap below: