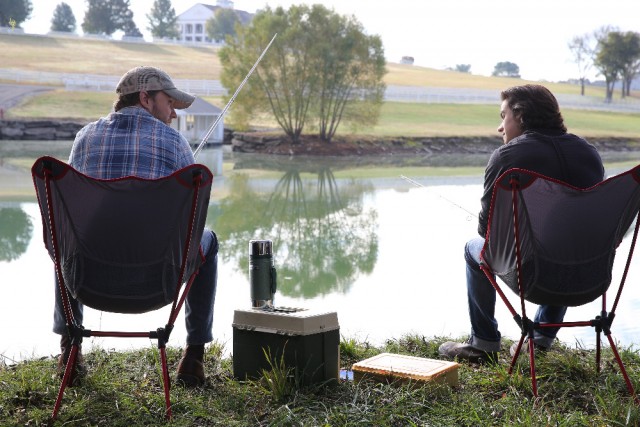 As in real time, some time has gone by since last we saw our favorite country artists of Nashville. Many are nearing the end of their respective fall arcs, and with one episode left before hiatus, they’ll have to figure out where to make their respective stands soon enough.

Markus is monopolizing much of Rayna’s time, which is raising Deacon’s concern level. When Deacon goes to check on Rayna, he ends up getting pulled into producing a song for Markus. Rayna, Deacon and Markus work really well together, so much so that Deacon begins to loosen up around the young songwriter. That is until Markus makes some changes to Deacon’s song without discussing it with him. Deacon is convinced that Markus has a thing for Rayna, but Markus plays the idea as preposterous when Rayna brings it up. As reassuring as this might seem, this will not be the end of this conversation.

Colt is still icy with Luke with no end in sight. The boys need some time away from the chaos, so they go home to decompress. Gabriella goes and messes it up by inviting Forbes to do a photo shoot of a happy father and son. Colt can’t take anymore and blows up at his father in a very public way, angering Luke to the point that he raises his fist to his son. He doesn’t actually hit Colt, but you can see that just the idea that he might have destroys Luke. Luke wants to stay home and work on their relationship, but Colt decides it’s time he leaves. That’s the downside to the moment your child has the higher ground, it’s the moment they can walk away.

While I can understand Colt’s attitude after everything he’s been through in recent weeks, there is no excuse for Maddie’s despicable behavior. Every teenager is rude to their parents, but Maddie’s behavior towards Daphne is ridiculous. Daphne has enough of it and finally calls out her sister on her horrid attitude. It slowly starts to sink into Maddie that her sister is right. Hopefully this is the beginning of some healing between the sisters.

Will is tapped by a publishing company to write a song for country singer Wade Cole. This artist is a true traditionalist, despite what he tells Will about having this attitude to please those in his inner circle. Avery is also trying to focus on the future and get his career going again. He can’t tell anyone that he’s in the middle of a divorce, which means he can’t rely on his wife’s money or name to get him gigs. Avery sums up both of their situations best when he describes the difference between what we want to do and what we have to do. So as uncomfortable as Will is with the situation, he sticks to the deal with the bigoted artist. As much as Avery wants to take real gigs that could get his name out there, he has bills to pay. It looks like Juliette is making an effort to reach out while she’s in recovery, so hopefully she can help out her family once she put back together herself.

While Scarlett and Gunnar get one free day off from touring, they decide to take advantage of the time to take care of some things they’ve neglected. Gunnar tries to catch up to the amount of songs Scarlett has written, while Scarlett goes home to Nashville to see her boyfriend. After a full night of attempts, Gunnar has squat. I wasn’t sure about Erin at first, but she ends up being exactly what Gunnar needs to get him out of his writer’s block. Back in Nashville Scarlett and her boyfriend have it out, and the end is finally near. Nothing against the guy, but he has already said he doesn’t respect Scarlett’s career, and truth be told I can never remember his name.

With the midseason finale set next week, will our favorite country artists find some storyline closure in time for the holidays?