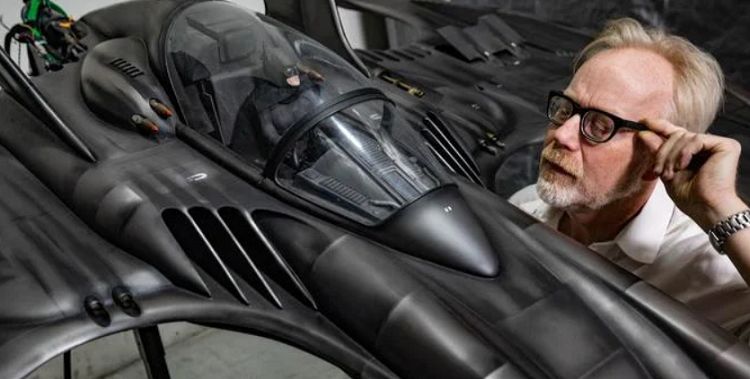 Batman is easily one of the most iconic superheroes of all time, and his paraphernalia is equally as famous. Although the Batmobile might be Batman’s most popular accessory and his most frequent method of transportation, the Batwing is a close second. With a history almost as long as Batman’s, The Batwing has become an important part of the DCU. Despite not making as many appearances as the beloved Batmobile, the Batwing got a lot of attention for its appearance in the 1989 movie Batman. With a custom design and everything that Batman needs to fight crime, it is easy to see why the flying vehicle was so popular. Mythbuster’s star, Adam Savage recently took a trip to the Prop Store to get a real-life look at the model of the Batwing that was used for the film. It has been completely restored and it’s about as impressive as can be. Keep reading to learn more about how Adam Savage got up close and personal with the Batwing.

The History Of The Batwing

Originally referred to at the Batgyro, Batman’s aircraft was introduced in the comics in 1939. The name was changed to the Batplane shortly after and it was called that for many years. In fact, the use of the term Batwing wasn’t popularized until the 1989 movie starring Michael Keaton. According to Batman Fandom, “The name Batwing originated from Sam Hamm’s drafts for the film. Tim Burton decided on a new stylized name for the traditional Batplane of the comics, similar to “the car” which was never being referred to as the Batmobile in the film. Originally, the Batwing was written to have a laser weapon, but, as the film was developed, it was decided to focus on artillery instead.” Since the movie, the craft has also been called Batwing in the comics. Over the years, the craft has had several different designs, but the one from Tim Burton’s movie is arguably the most recognizable. Many fans have always been impressed with the Batwing’s beautiful and sleek style. After all, Batman has always been the type of hero that really likes to ride in style, and the Batwing is perfect for helping him achieve that.

The Prop Store is known for being home to lots of awesome film memorabilia which is occasionally auctioned off for a good cause. During Adam’s trip to the store, he got a chance to check out the completely restored Batwing. However, it’s important to note that what Adam saw was actually a model of the Batwing.

According to Movie Web, Brandon Allinger, who works at The Prop Store, said:

“Models are interesting, because they’re kind of like cars. Time tends to take a toll on them, and they can be rebuilt and reworked and reset like cars. The original production drawings showed the Batwing vehicle was to be 27′ in width. This model is about 6.25′ wide, so its intended to be 1/4 scale. It’s true that the Batwing figure is smaller. If you look at the sequence in the film when you see the 2′ wide model (wider shots, shots where the Batwing is moving a lot), the Batman figure is noticeably larger within the cockpit — probably more like the proportions the construction drawings intended. Regarding the mechanisms, nothing was removed. The original pneumatic cylinders are still present (but disconnected), and the original tracks, slides etc are still used. We just added linear actuators as ‘helpers’ to act in place of those cylinders.”

What Was The Model Used For?

In the description of the video of Adam’s trip to The Prop Store, the use of the model is explained by saying that it “was used for climatic flight sequence” in the movie. Not only has the model been restored to look its best, but it’s also in full working condition. Like most people, Adam was impressed with the Batwing’s awesome design. He inspected the piece thoroughly and got a chance to ask the kinds of questions that other fans have probably been wanting to ask for years. You may have thought you got a good look at The Batwing in the movies, but seeing the model will still probably blow you away. Even after more than 30 years, the classic design still has a futuristic look that many would agree is timeless. Those who love Batman memorabilia will also be happy to know that The Prop Store also has other items from Tim Burton’s iconic movie.