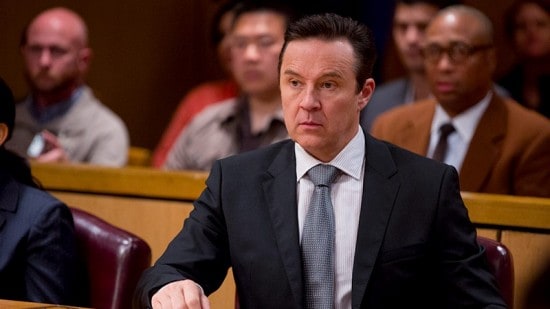 We are now halfway through the sophomore season of TNT’s police and courtroom drama Murder in the First, and things are starting to really heat up. The gang war has gotten more violent, the internal investigation has gotten more intense, and the criminal who shot up the bus in the first episode pled guilty. Nothing has gone the way I’ve expected it to, and that’s a good thing.

This week on TNT’s Murder in the First: Terry and Hildy try to keep things on the down low as people find out about the internal investigation. Navarro, trying to help his brother, goes missing. The Chinese gang has retaliated against Suger. The shooter pleads guilty to the murder of the ten bus riders.

All in all, Murder in the First gave us another dramatic, powerful hour of television. The acting on this show is very good, and each plot thread is well fleshed out. The only issue I have (I’ll talk about it first because it’s minor) is that I can’t see at this time how the plots are related. Are they related? Or is this simply the consequence of having a serialized cop show? The main problem I have is that this is impossible to distinguish. Everything in Season 1, in some way, related to the personal lives of the characters or the main case. I’m assuming (right now) that these cases are unrelated, and it’s simply supposed to be a drama involving the various characters. What I’d like to see, however, is relating it back to everything, and threading some of these plots together. But, with a serialized cop drama, I’m assuming that multiple arcs in one season is just a consequence of the chosen format.

Everything else in the episode was pretty strong. I like the way that the different arcs are developing. Where the heck did Jamal’s body go, anyway? My personal theory is that he’s not dead, and he wanted to be able to escape Suger’s wrath when “he has a sister” was revealed. Of course, this show usually turns out a little more straightforward than that, but hey I can dream, right? Suger’s arc has become pretty interesting over the last couple of weeks, so I can only imagine after this week’s ending that there will be some ensuing drama.

I was disappointed to see so little of Navarro’s arc this week. As much as I don’t believe he killed Kaleb, I would still like to know what kind of turmoil he is entangled in. However, Molk finding out that Navarro is a suspect is probably the most dramatic moment of the episode this week. It was a really strong moment, and Raphael Sbarge nailed it.

Overall, I’m pretty pleased. Again, I’d like to see some of these threads tie together, but even if they don’t, there are some solid arcs happening on this show. The actors are strong, the plotlines (though apparently unrelated) are solid, and the show offers an interesting alternative to shows that solve their cases by the end of each episode. I like to be dragged along a little bit on shows like these, and I’ve not been disappointed.

What did you guys think? Did you enjoy this week’s episode? Let us know in the comments!