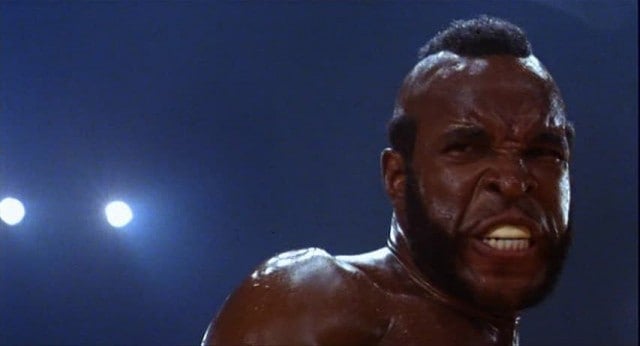 Remember how Mr. T used to walk around sporting a shifting collar of gold chains and other items? He gave up his trademark gold chains and just about everything else in 2005 after becoming a born again Christian and helping out with the effort to clean up after Hurricane Katrina. The devastation that he saw and the loss of lives, homes, and property humbled him in a way that nothing else had done up that point. He decided that it wasn’t entirely Christian to be walking around sporting his customary gold and looking as though he was made of money when the people he was trying to help were suffering in squalor.

That paints a vastly different picture of the Mr. T we all remember since in many of his onscreen roles he was an absolute nightmare to whoever was standing in front of him, be it friend or foe. Even on the A-Team his teammates at times had to be wary of him since as B.A. his temper was legendary. In Rocky 3 as Clubber Lang he was an animal that couldn’t be stopped when in the ring, and kind of an arrogant jerk on the outside. No matter what movie Mr. T was in as a younger man he was just flat out tough, though if he ever played the good guy he could show a softer side every now and again.

He even got into the wrestling scene for a while when it was still titled WWF, before it had to switch over to WWE. He was associated with Hulk Hogan for a while and was brought on as a WWF boxer for a short time in which he fought Cowboy Bob Orton and Rowdy Roddy Piper. Unfortunately his tenure there wasn’t fully appreciated since a lot of the wrestlers didn’t take kindly to the fact that he hadn’t earned his way up as they had. Mr. T was brought in more as an attraction to boost ratings and get more people watching. Eventually he was phased out of it completely, but he still kept on acting and taking parts where he could find them. For a long time though he wore those gold chains everywhere, even when he got older and the look started to seem kind of outdated.

That was his thing though, his hook, and it was a part of how people identified him aside from his mohawk and constant scowl that he wore all the time. Mr. T was an icon in his time and still kind of is an icon, but picturing him as a born-again Christian isn’t hard, it’s just hard to see him without all his bling that used to be a part of his image. You can’t fault the man for having compassion for others and thinking that flaunting his status in such a way would be kind of a jerk move. It’s just that one more piece of our childhood is gone now, taken by a world in which people continually change. Ah well, it can’t last forever. Right?