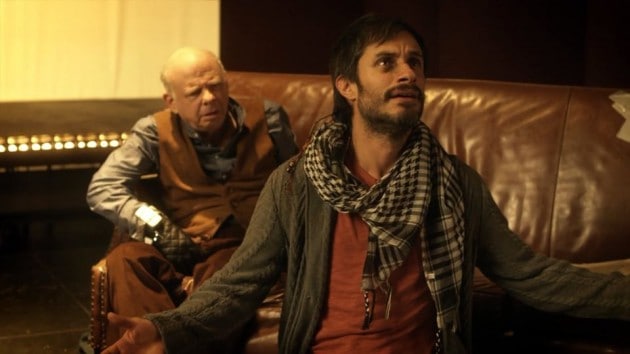 After two strong entries, Mozart in the Jungle stifles most of its narrative momentum with “Mozart with the Bacon”, a disappointing episode that grasps at the surrealistic tones of recent episodes, yet only comes away with some cliche images and ideas – and in the case of Hailey’s story, just plain awful material. “Mozart with the Bacon” tries to approach the idea of discovery in three different stories; yet all three fumble to make connections with each other, or find any resonant material worth exploring on their own.

Surprisingly, the most disappointing material doesn’t come from the wasted Wallace Shawn appearance – while Rodrigo’s dream sequence was an embarrassing mess of trite symbolism and bad editing, it doesn’t come across anywhere near as hollow and disingenuous as Hailey’s first lesson with Warren (or whatever his real name is). I really don’t see what the point of that was; turns out the nice, mysteriously peaceful and reflective man we met last week is just another New York scumbag, a pervert who disguised his weirdness with an odd amount of intelligent conversation. Not only does it sell John Hodgman’s performance in last week’s episode short, but it completely cuts off all the momentum they’d been building with Hailey’s presence in the pair of episodes (and to a lesser degree, the season). It all seemed unnecessary, time that would’ve been better spent at her first lesson with Betty, something “Mozart with the Bacon” spends far too little time with.

The other two stories are really just kind of boring; Wallace Shawn’s unsettled pianist doesn’t make for that entertaining of a seer – and again, leads us to Rodrigo’s laughable experience, which just points out he’s still obsessed with his wife. The show would rather focus on this, than grasping on Winslow’s revelations about Rodrigo’s creative confusion stemming from lack of inspiration? While the idea of love as inspiration is a universal truth, the application of the idea on Mozart in the Jungle is anything but unique; Rodrigo can’t create without his muse, who he loves and hates with such passion. After the last two weeks, I was hoping the show would search for something more revelatory (and unique) than that.

That revelation sucks a bit of life out of the proceedings, something that carries over into Cynthia’s visit to Cuba, where Thomas is predictably pretending things are “just fine” when they aren’t. He’s not taking his medicine, so Thomas’s wife sends the woman she hates down to find him; this alone makes for a strange plot, and Cynthia’s presence as set dressing throughout the rest doesn’t make for a fascinating watch, either.

It makes for an oddly boring half hour of television, the only moments of real drama stemming from Rodrigo’s silly hypnotization and the increasingly sexual oboe lesson Hailey’s teaching (Gloria’s stress is always fun to watch, but it’s hardly anything new or exciting); and those two places are hardly intriguing directions for Mozart in the Jungle to head, a disappointing follow-up to the pair of episodes preceding it.