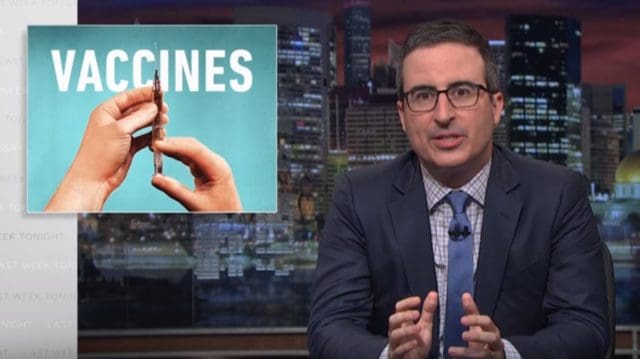 Rather than get entirely political and enforce all of my views on vaccinations in children, I will say that I’m a father of two young boys and 100% support getting them vaccinated. However, I will 100% acknowledge that it’s a very sensitive subject and one that should be taken with both sensitivity and caution. I know first hand the dangers of over vaccinating and leaving your child in the care of poor doctors. But I can also say that in the right hands and given vaccinations at an appropriate clip, you would be a fool as a parent not to protect your child from harmful diseases and conditions that can be eliminated with a vaccine.

Again, this is the very very short version. However, a much longer, scientific and humorous version of the debate was featured on Last Week Tonight with John Oliver. I’m glad that Oliver decided to make this issue his feature as it hits home to so many people. It’s also nice to see him take somewhat of a break from Donald Trump, if only to give us a moment to breathe while he prepared his next 20 minute administration bashing.

Check out the vaccine piece below: