Home
Movies
What Movies Always Get Wrong About the Insurance Industry 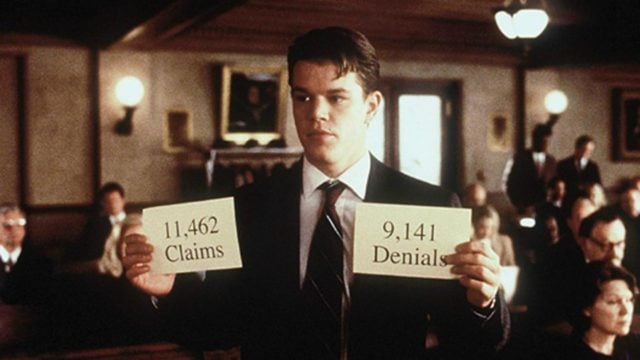 Nothing is the in reality quite the same as it is in the movies. Be it cops, lawyers, or large corporations, filmmakers give us what we want to see, which means to enforce as stereotype or “trope” or to get us to root for that “little guy” who has been messed over by corporate greed. .Portraying things larger than life is a prerequisite for making an entertaining picture. When it comes to insurance, everyone has had dealings with an insurance company in some respect–be it car insurance, health insurance or life insurance.

But just because we know that insurance is one of the most boring aspects of life, it doesn’t mean that movies can’t make it look exciting or use it for a plot twist, with a little cinematic license. Here are some scenarios on film that defies the average person’s experience when dealing with insurance companies. In real life, there is lots of workers bored out of their skulls going over actuarial tables and customers put on hold and endlessly transferred, but that wouldn’t be very exciting so here is what movies get wrong about insurance companies.

When Kathy Bates’s character, Evelyn Couch, says “Let’s face it girls–I’m older and have more insurance” we love how she gets those young bimbos back by smashing their car over and over in the Winn Dixie parking lot. But practically, in real life, pulling a stunt like that can not only land you in jail, it will make your bill for that “more insurance’ go sky high. We don’t see Evelyn dealing with the authorities either, and her husband simply gets a phone call. Not in real life. There are taped statements and all kinds of red tape investigations following an accident, particularly when one driver used her car as a battering ram. Insurance companies don’t care how much insurance you have–they may drop you if you are seen as an undue risk. In real life, an Evelyn might end up shopping for the “less than stellar record okay by us” car insurance that they advertise on daytime TV.

Good Guy Lawyer Wins the Hearts of Jurors (The Rainmaker)

This film depicts big insurance company personnel gleefully denying a dying man’s medical needs which causes him to die. Luckily Matt Damon is on hand to make a grandstanding plea for justice, armed with a poignant videotaped statement from his now deceased client. In real life, these cases are often handled out of court and there is no “battle of the lawyers”–many lawyers just file the paperwork and just work out a settlement–nothing personal to “take down” that evil insurance company and the denial letters are not snarky. In truth, many different people handle a claim. It’s boring and highly regulated and either it’s covered or it isn’t. No gray area, really. Based on the novel by John Grisham’ and directed by Francis Ford Coppola, this film is over the top painting the heroes and villains. Sure insurance companies are in the business to make money but they don’t relish turning away the dying, it’s just the rules.

I hope none of you have had to deal with a loved one dying but if you do (as I have) please don’t expect the insurance company or the company the deceased worked for to go out of their way to visit you and inform you that your loved one had a policy and help you get paid. In real life, even most chain smoking alcoholic wives know whether or not their spouse is insured and you usually have to initiate the payout by filing death certificates, and tons of forms on your own.

This takes time (like months in some cases) and insurance companies are in no hurry to process claims while you are still wearing your funeral outfit. Also, if it’s a big policy compared to your lifestyle, and you jump up and down all happy about the cash, the insurance company might launch a little investigation. At the very least they inspect the person’s medical history hard to look for possible predating conditions. The insurance guy might visit your home to sell you the policy but often does not just show up out of the blue to pay you. Also, casting a magic spell will not turn back time to write a policy that isn’t in existence for a certain time period before the person’s death.