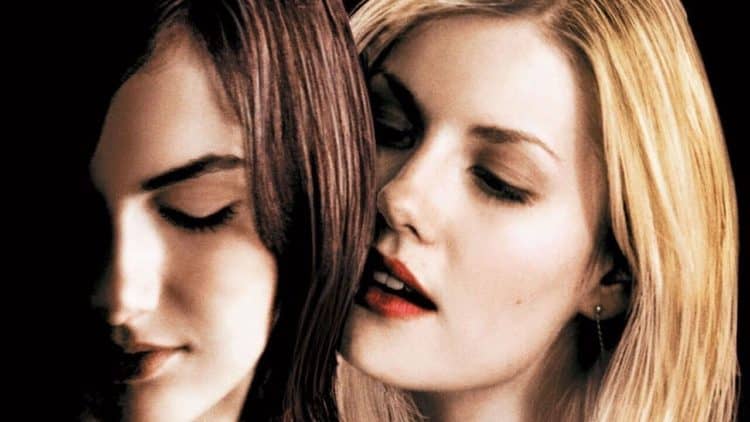 It’s interesting what a person can find on Amazon Prime when they go looking, especially since some of the movies and shows that are there to be found can remind us of what the actors of today were like a decade and more ago. Released in 2005, The Quiet is a movie that’s rather low-key and offers up more drama than mystery or thrill, but is still all kinds of disturbing when one remembers back to their teenage days and what it was like at times. Having gone to live with her godparents when her mother died, Dot is a deaf-mute teen that can read lips and communicate in sign language with a few people in the story. Nina, the daughter of Olivia and Paul Deer, who take Dot in, is resentful of the young woman’s place in her home and makes her displeasure known more than once. But the trick here is that Nina isn’t just a snotty young woman that’s popular, part of the cheerleading squad, and absolutely gorgeous, she also has a secret that would likely ruin her if it was ever to get out.

The secret is let out of the bag rather quickly in the movie as it’s revealed that Paul and Nina are engaged in an incestuous relationship that’s enough to turn a stomach as Nina uses this to get her way, while her mother, who has an addiction to prescription medication, is fairly hopeless as she can’t excite or satisfy her husband, as his attentions are lavished elsewhere. When Dot finds out about the situation between Nina and Paul she decides to side with Nina, even if the other woman isn’t entirely accepting of her support. Instead, Nina continues to be stuck up, but she appears grateful at least for the interruption that Dot creates when she ‘accidentally’ breaks a vase in the hallway outside Nina’s room one night, breaking up the moment between Nina and Paul.

But it’s not until Nina comes home one day and notices Dot playing the piano that she notices something revealing. Dot swears aloud when she messes up a key and then attempts to harmonize with the piano as she continues to play. The realization that Dot can speak and hear sparks something in Nina as the next day at school she confesses to Dot that she’s planning on killing her father, as Nina instinctively knows that Dot won’t say anything as it would mean revealing her secret. Keeping the secret, Nina continues to deal with her father and his sickening, amorous advances as her mother does next to nothing apart from being zoned out half the time. On the other hand, Dot gains the attention of a basketball player from their school, a young man named Connor, as he begins to hang out with her after becoming Dot’s partner in a lab class. When Dot and Connor have sex at one point he ends up telling her a few personal things about himself, still thinking that she can’t speak or hear. But the look on her face after they’ve done the deed makes it clear that she doesn’t know quite what to think, but it’s nothing good.

At one point Nina does lie to her father when telling him that she’s pregnant, which is something that stands out as a huge problem, not to mention an extremely disturbing one as her father is beside himself as he tries to think how to spin things. Dot and Nina continue to grow a bit closer throughout the movie, but at the same time, she remains angry and aloof up until the school dance, which she encourages Dot to attend. Before they can head to the dance, however, Paul finds tampons in Nina’s purse and physically confronts her as he demands to know why she would lie to him. Considering that she had already come close to pressing a hot iron to his face earlier, one can feel that this confrontation was coming. But as Dot hears the commotion of Paul threatening to rape his daughter, she grabs a length of piano wire and rushes upstairs, strangling Paul with the wire until he falls dead. Initially, Nina expresses sorrow over her father’s death, but they still end up going to the dance together with Nina’s friends.

At the dance, Dot reveals to Connor that she can speak and hear, and he rejects her out of hand as he told her several private things and feels betrayed. Eventually, Dot and Nina end up leaving the dance to go home and find police cars lined up in front of her house. They find out that Nina’s mother has confessed to killing her husband, and she apologizes to Nina for letting the incest go on for so long before she’s taken away. In a sense, one can easily imagine that Olivia finds this to be a relief since she’s free of her emotionally abusive husband, and has managed to finally protect her daughter. It’s a movie that has a definitive end after offering up a less than clear beginning, but it’s easy to think that to parents this would be an infuriating tale.