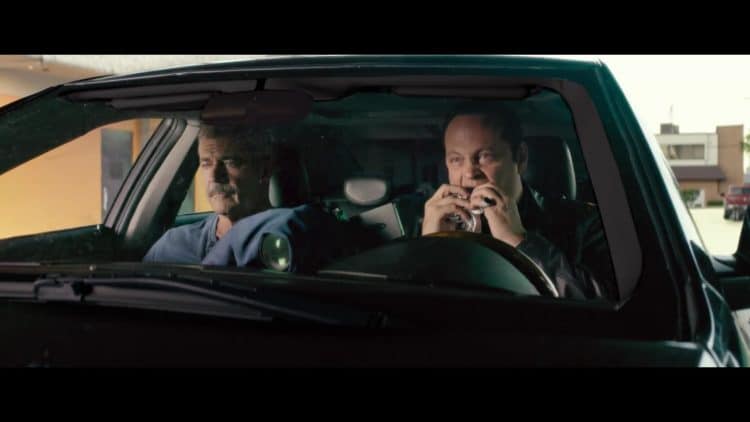 This is kind of an odd movie to see emerge in a woke era, and with the idea that cops still aren’t the favored people of many citizens across the country, but it’s also easy to understand how it might not have been considered a big hit. The dialogue is a bit rough, or at least tough to follow at times, but the general idea is that Detectives Ridgeman and Lurisetti aren’t exactly what anyone would call great cops, but they do their job. With Mel Gibson as the aging and kind of grumpy-looking Ridgeman and Vince Vaughn as the fastidious and morally upright Lurisetti, this movie comes off as a feature that might have been meant to be a buddy cop movie with a dark sense of humor at times. Of course, there are moments when it would appear that the movie appears to forget what it’s all about since there are instances when the audience might wonder what they’re really watching. It’s also tough to follow at times simply because a few different stories are going on at the same time in this movie.

One of the first to take note of is that of Henry, who after being released from prison returns home to find his mother has taken to prostitution, a development he doesn’t care for as he makes it clear to her latest john that he needs to leave. After this the audience gets to meet Ridgeman and Lurisetti as they’re on a bust, doing what they can to bring in a known drug dealer. Unfortunately, as Ridgeman takes the dealer down as he crawls out of a window, he uses what’s considered to be excessive force on the drug dealer. The act is caught by someone standing at their window recording the whole thing on their phone, and as a result, the two detectives are suspended for six weeks without pay. Some might say that was a bit unfair, but in an era when anyone with a video camera can nail a cop for using ‘excessive force,’ it does make a lot of sense to add this in.

Of course, given that both detectives have a great deal to pay for, Ridgeman has a wife with MS, and a daughter that’s been assaulted several times, prompting his wife to nearly beg him to find a nicer place to live. Lurisetti on the other hand has an engagement ring to pay for as he’s thinking of asking his girlfriend to marry him. That’s a lot to think about and a lot to pay for, especially since if the movies are even halfway accurate, those in law enforcement aren’t always paid that well. When Ridgeman comes up with an idea to steal a load of gold bullion from a dangerous bank robber and enlists Lurisetti for the stakeout and the job. Lurisetti isn’t too keen on the idea since he’s a little more upright, or tries to be, but he still goes along with the job as he’s feeling the pinch of no pay as well. When it’s discovered that Henry and his friend Biscuit are working as the hired help for the bank robbers the story narrows down a bit, but when it becomes obvious that Henry sees Ridgeman and Lurisetti following the getaway van, he says nothing.

The confrontation that ends up happening gets messy as one would imagine as the bank robbers took a hostage. At one point the hostage is sent out, but she proves to be a weapon to use against the detectives as she shoots and kills Lurisetti before Ridgeman shoots her. After killing the robbers, Ridgeman is confronted by Henry, who managed to run before everything started. After watching Biscuit being shot down, Henry hid out to wait and see what would happen. What’s unfortunate is that the movie does display the lack of trust between Ridgeman and Henry following the debacle, and some would likely say that there are racist undertones as well. But if there’s a point to this movie it’s that trusting a person’s word is a gamble, but it’s one that a lot of people feel is worth the risk. The general feeling toward dirty cops that are simply trying to do what they can for their loved ones is hard to get around, but at the end of the movie, it’s seen that Henry does the right thing and splits the gold with Ridgeman’s wife and daughter, allowing them to move to a better location.

All in all, this movie wasn’t anything special to crow about, but it was enjoyable enough to keep watching. The dynamic between the characters is intriguing and about the only thing that feels off is the dialogue, but this isn’t so bad that it detracts that much from the movie. The idea of dirty cops trying to make a payday is only one aspect of this movie, but it’s definitely noticeable.