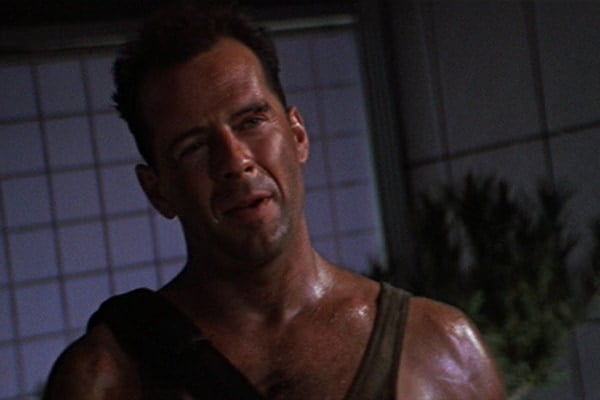 Depending on who you ask, the police are either the most upright citizens we have, protecting and serving us all, or they’re a bunch of crooked, corrupt, power hungry racists that deserve to be treated as such. In cinema they’ve been represented on both counts, with a little bit of bumbling goofball and fearless action hero thrown in for good measure.

One thing’s for certain.  Cops will always be a staple in movies and just how mean or funny they are is going to be determined by the audience and just how well or accurately they are portrayed.  Over the years we’ve seen our share of memorable movie cops but we decided to narrow it down to a finite number.

Here are what I think are the ten best movie cops of all-time.

Most of the officers are on here are super tough guys, but I had to start things off with Farva, the world’s most useless state trooper, hated by even the other useless state troopers. He wants a liter of cola and his car to be called “Ramrod” and will stab you in the back if you don’t meet either requirement.

So technically Barricade is a space alien inhabiting the a police cruiser, but in my eyes he’s still a cop. The best part about him was that he was very clearly a Ford Mustang, the evil foil to all the other fine General Motors autobots. Real subtle guys.

Here’s a prime example of what NOT to do if you become a police officer, mainly lie, cheat, extort and beat your way to the top. You may be “pure” and good for awhile, but as Alonzo found out the hard way, nothing gold can stay. Unless you play such a cop in a movie, in that case you will receive plenty of gold, in statue form.

Probably the craziest cop on this list, Mel Gibson took this character through the paces for four pretty decent films. He was a comedic, spastic foil to the calm, cool and collected Danny Glover. He also had one fine mullet back in the day.  It’s a shame that he’s just nowhere close to being the guy he was in the 80s.

I’m not as big of a Beverly Hills Cop fan as most, but even I recognize the iconic status of Detroit cop Axel Foley, played by Eddie Murphy in his glory days before he decided that fatsuits = hilarity. Allegedly a new BHC movie is on it’s way with Murphy reprising the role (probably just fodder). Good or bad idea? Whatever, it can’t be any worse than Meet Dave.

Alright again, a machine invading the body of a cop, not a real cop. What’s with machines and wanting to look like cops? I guess people probably ask less questions when you’re rolling around with sirens on. Just be glad all cops can’t shapeshift and hook on your car with their spiked metal arms.  That and look real funny while running.

No, not the Steve Martin version. Before that abomination there was Peter Sellers as Inspector Jacques Clouseau, the clueless French detective who broke up elaborate heists and plans for world domination by accident. Yes, French police are still real police, and Clouseau’s comedic stylings definitely deserve a spot this high up.

Patrolling the streets of New Detroit, turning bad guys into mush via bullets, RoboCop is probably one of the most intimidating officers on this list. Just wait another 20 years, and we’ll all be very well behaved as these things march down our streets.

The original bad cop of cinema, Dirty Harry himself, absolutely had to land a spot on this list. And he very nearly made it to the top as well. His films were full of action and unforgettable lines, which would be cliche to repeat here. Something to do with a rapscallion having a good fortune, I’ll leave it at that. So who could possibly beat him out?

Ah you didn’t think I’d forget him did you? Easily the most fearless cop on this list, John McClane is the original Jack Bauer, and stopped terrorist plot after terrorist plot with absolutely no regard for his own safety. If we overlook that little PG-13 related nonsense that happened recently, Officer McClane has easily given us some of the best action movies of all time, and for that, we owe him the #1 spot.