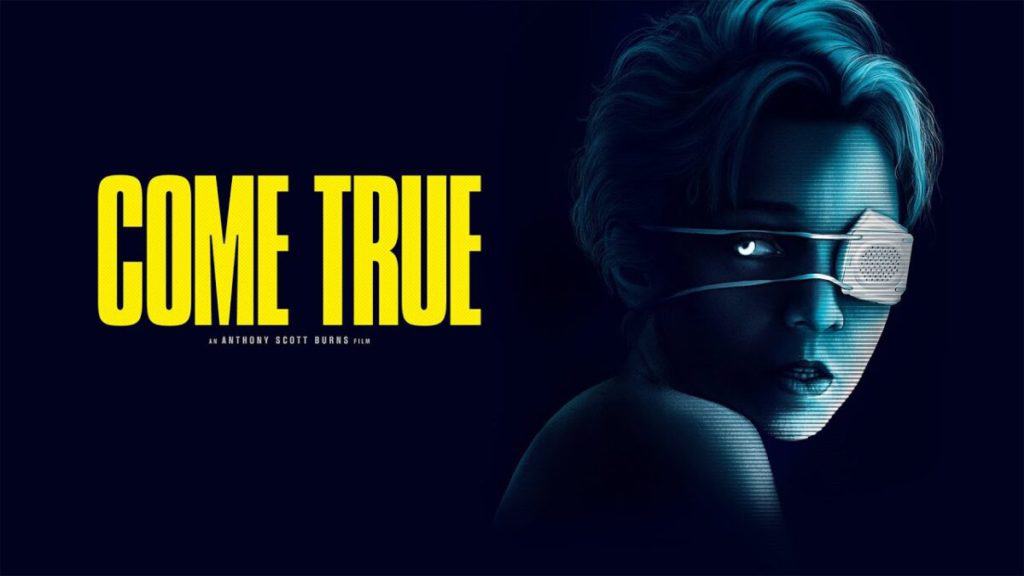 This is a rather odd movie when one first tries to get into it since Sarah dreams of darkness, and of images that are vaguely disturbing, as well as ominous in their appearance. There are hallways, doorways, and a strange, foreboding figure that continues to haunt her dreams every time she closes her eyes. She has little knowledge of why this is happening, but the movie starts off rather slow as the audience is given the barest tidbits of information to go on, such as the fact that Sarah sleeps anywhere she can, be it in a park, at a friend’s, or anywhere else but home as she appears to have a serious issue with her mother. Sarah actually waits for her mother to leave the house before sneaking in, grabbing food and a few other things before lighting out once again for reasons that are never fully explained. The dialogue in this movie is rather sparse when compared to many other movies, which is intriguing but also kind of disconcerting since it displays a true lack of information that the audience has to pick up from the imagery and what little action there is.

When it comes to the imagery however it’s best to pay attention in this movie since there is plenty of it, and the interpretation that is experienced by each audience member is up for debate since throughout the movie the lack of any real, meaningful dialogue could be seen as a bit off-putting. But while the constant feeling of dread is there for much of the movie, a vague and unsettling level of unease can be felt as well, as though things aren’t right and aren’t about to be alleviated in any way. Even when Sarah manages to stay the night with a friend, the tension is still there, just beyond the mild reprieve that she’s given by sleeping in a bed with someone that cares about her.

Upon noticing an advertisement for a sleep study that is being conducted at the college that is located within the city, Sarah enrolls in the study along with several others, though as one could have guessed, things were about to go from strange to worse. Anything having to do with sleep, with plumbing the depths of the human mind, for any reason, tends to come with a great deal of trouble in a lot of movies. But when Sarah and the other test subjects start to have dreams of the same dark figure with glowing eyes, it becomes obvious to the researchers that they’ve tapped into something that is far more ominous and possibly crucial to their studies than they were ready for. As the majority of the team tries to remain objective, one among them, Jeremy, called Rif, begins to follow Sarah around, though he makes himself far too obvious and Sarah eventually figures out what he’s doing. When Sarah threatens to leave the program, Rif shows her what has been going on, thereby jeopardizing the experiment, but also keeping Sarah around as she keeps her word to stay with it.

Come True is the type of movie that feels as though it tightens into a coherent and easy to follow story only to loosen as trailing threads come and go, but there is one great aspect to it that is able to exist as a core element of the movie, and that’s the overriding sense of dread. The dark figure is, at the beginning of the movie, the type of presence that one can imagine is dormant, or at the very least not strong enough to create any meaningful change at that time. But as Sarah, and then others, continue to dream of the dark character, more dark characters begin to show up, and eventually it’s revealed that they have glowing eyes, and are facing the dreamer. If that’s not creepy enough, eventually the dark figures begin to appear to the dreamers when they are in a semi-conscious state between sleeping and waking, giving the impression that the more the dreamers think of them, the greater the chance is that they can make the jump from the dreaming world to the real world. When it’s discovered that Rif also dreams of these dark figures, and has been for some time, the audience is given the clue that something else is going on.

Things do continue to take one dark turn after another as Sarah experiences a sleepwalking episode after a sexual episode between her and Rif causes her to see two dark figures behind and sends her into a coma-like state. By the end of the movie, several things have happened, and the final text that Sarah receives upon her phone makes it clear that everything the audience has been watching has been little more than one massive, very disturbing dream that Sarah is still having since she’s been in a coma for the past 20 years. As the final line of the text implores her to wake up, the screen goes to black, and the credits start to roll. It’s definitely a trip through a dark and madness-induced dreamworld, but Come True is, for better or worse, an intriguing movie.