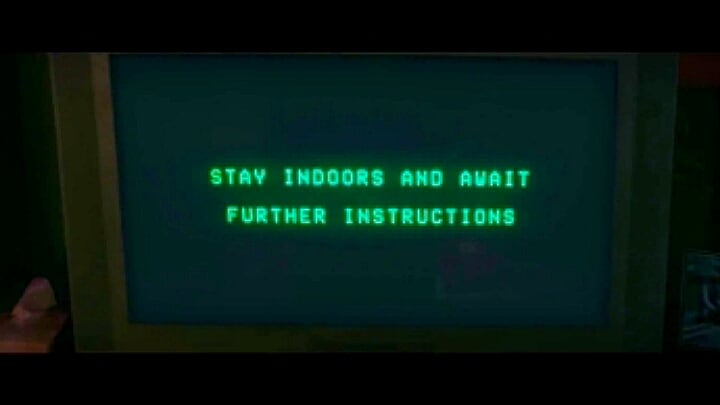 Many of us can still remember the days when technology didn’t appear to rule our lives in such a big fashion. Back in the days before the internet, before cell phones became a big thing before TV and movies blew up as they have over the years, people weren’t as invested in the type of technology we are now. We didn’t have screens everywhere, or mobile devices to focus on with every waking moment. But that’s not the way things are now, and movies are showing this with repeated frequency as the technology that people depend on so much is being shown as less of a boon and more of a bane at this time, since a lot of people tend to believe that what we can’t appear to do without is bound to rise up and attack us in one way or another. Of course, it does stand to reason that a lot of people watching Await Further Instructions might not fully understand what the movie is really about in the first hour or so, but for those paying attention, it becomes evident if they’re paying attention.

The movie starts out as a young couple returns to the home of the young man as they knock on the door and are greeted by his mother. While she appears surprised to see him, and his brown-skinned girlfriend, she’s more accepting than the rest of the family, as the young man’s grandfather doesn’t hide his disdain for the rest of the family, his father is a strict and undeniably arrogant individual, while his sister is a manipulative woman who is pregnant and expecting within a couple of weeks, and her companion, a doctor, still acts more like a frat boy than anything. The get-together is rather tense since it’s fairly obvious that the young man and his family don’t get along that well, but things end up getting a lot worse when he and his companion try to leave after deciding it would be best, they find that the home is surrounded by a strange, black wall of iron-like material that covers every window and doorway, barricading them in as all forms of communication are cut off.

When the TV starts to deliver instructions, beginning with ‘Stay indoors and await further instructions’, the family begins to come apart quickly as the young man and his girlfriend attempt to keep their heads, while the others unravel quickest. The father attempts to take control and instructs the rest of them to follow the TV prompts, indicating that he’s willing to trust the TV message. The general idea is, at first, that the outside world has become chaotic and that they’re being kept inside for their own safety, but the strange black barrier is still a concern. When other messages start to appear on the screen, telling the family to do one thing or another, the father insists that they follow the instructions. This includes injecting a vaccine into each one of them, which is greatly questioned, especially since none of the hypodermic needles are capped. Once this is done the grandfather dies, and the instructions change.

The blind faith and devotion to what is presented on the TV are one of the main points of the movie since our trust and reliance on technology and what it conveys tends to, in the worst scenarios, break up connections between people, severing bonds that back in the day might have been a lot stronger without said technology. It’s ironic that the advance of technology is meant to improve the quality of life, especially when it severs and leaves behind the core values that were part of the reason why technology was advanced. Bringing people together and strengthening their bonds has, believe it or not, be part of why technology is so important, as keeping people capable of connecting with each other is one thing that technology has been able to do. But when the technology becomes more important than the values it’s meant to broaden and strengthen, the ties between people can and do crumble depending on the strength of said bonds. In other words, technology replaces the same values it’s meant to reinforce. When one begins to worship technology, they tend to let everything else drift away.

By the time the movie is about to end, the understanding is that the presence within the TV has become self-aware, and has developed the need to be recognized as a type of god-like force that desires obedience without question. It does help that the familial bonds that tie the family members together are already weakened, but the constant stress felt in the movie was enough to nearly sever them as one by one, the family members dropped off until only the sister’s child was left to stare at a screen that welcomed her to the world. It’s an eerie movie that has a disturbing ending, but many people are bound to lack the understanding and will likely see it as a screwy horror movie. But the commentary on how much people depend on technology does strike a little too close to home.