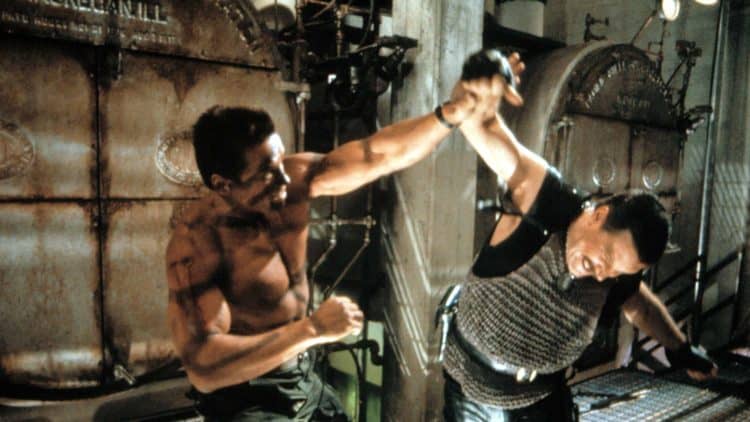 Some movies give a valiant effort to create scary characters and some succeed, but then there are others that kind of fall short of the mark since their characters end up looking less than imposing for one reason or another and come off as a bit silly. The design teams can kind of fall down, metaphorically-speaking, every now and then since upon looking at earlier designs for some bad guys a person might ask why the other looks weren’t considered first and last. But sometimes it comes down to practicality and how likely it is that an outfit can be pieced together. A person has to remember that people have to move in the outfits, and they have to look intimidating at the same time. The choices that get made though are sometimes a bit awkward since they end up making the bad guy look like they’re somehow a cruel prank that’s being pulled on the audience and the main hero, or heroes, and that the movie would have been better off introducing a secondary villain that’s not as important but is a lot more imposing.

With that in mind, here are a few bad guys that looked silly instead of intimidating.

If this was the same character that Mad Max had to deal with then he’d be a walking nightmare since he was terrifying. But as Bennett this guy was kind of a joke, especially when stacked up against the muscular titan that was Arnold Schwarzenegger. Some might say that one should never underestimate someone that’s not all muscled up and looking as though they could take down an entire army on their own, but in this case, the first impression was the right one since Bennett looked as though he could take on a grunt or a soldier right out of boot camp, but not someone as skilled as Matrix.

Who in THE HELL came up with this creature design? Without trying to offend, even though it might, this version of a rubberized suit had to be one of the most useless ways to feature a monster that by all means should have been one of the scariest things on the big screen. The Creeper is absolutely terrifying on paper to be realistic, since eating different body parts and scenting peoples’ fear is kind of cool, and the weapons he uses are insane but impressive. A throwing star with teeth in it? A lance that shoots out of a tailpipe? That kind of stuff would be great, if not for the fact that the demon is still a guy in a rubber suit.

The Shredder has been mocked relentlessly for a while, and there’s been a good reason. His skill set is impressive and there’s no doubt that he’s a deadly enemy, but all that hardware he rolls around with feels like it would get in the way at some point. Plus, in the most recent movies, the fact that he can recall his blades is cool, but the fact remains that he’d have to be one strong son of a gun in order to pack around all that equipment since the lot of it has to weigh in excess of a 100 pounds or more. Oh hell, it’s probably closer to 150 to 200 combined with the suit. And he can fight like that?

Like it or not, that helmet is ridiculous, and even more so since he doesn’t need it. He’s such a hardcore Vader-phile that trying to look like his grandfather has become a way of life apparently. The problem is people can barely understand him when he has it on, and it can’t do anything for his vision when he’s fighting. But all in all, it’s kind of a goofy look and thankfully he does get rid of it eventually. But then it makes another appearance in the third movie, even if it’s ditched eventually. The recent trilogy needed a big bad, but Kylo wasn’t about to be it since he looked too much like a desperate teenager trying to fit in somewhere, anywhere, so long as he was respected and wanted.

What did Immortan Joe actually do besides giving orders and inspiring people somehow? It’s not even clear how he did this since the only thing he controlled was the water and by extension everyone else. The fact that no one had overthrown him and his sons was due more to the fact that he’d spun a tale to his followers of how they’d be welcomed in the afterlife if they followed him and committed themselves to his cause. In other words, Joe was a cult leader that could only prey on the weak and weak-minded. Otherwise, he was kind of a joke.