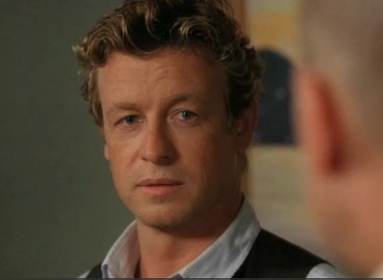 The season premiere episode of The Mentalist, “Redemption”, begins with our favorite master of observation Patrick Jane (Simon Baker) up to his old tricks. The CBI are called in to help out the homicide department on a department store murder. Detective Lisbon (Robin Tunney) warns Jane to take his theatrical antics down a notch (or three), but Jane’s never been one to listen to authority.

Jane gathers together the witnesses (suspects), and in Agatha Christie style, narrows them down with random questions and observations of their behavior. Using a trick he pulled on Van Pelt (Amanda Righetti) last season, he uses the guilty party’s reactions to his movements to discover the murder weapon and the killer. All in a day’s work.

Click here if you’re looking for the full, extra-detailed recap of The Mentalist “Redemption”.

Back at the office, Jane and Lisbon get called on the carpet for Jane’s unorthodox and unprofessional crime solving methods. Minelli (Gregory Itzin) tells them they’re too focused on the Red John case and have lost their perspective. He’s giving the case over to another agent, Sam Bosco (Terry Kinney).

Lisbon takes the news as a wake-up call to work by the book and earn their boss’ trust back. Jane takes it as his cue to leave, claiming there’s no point to working in a useless system if he can’t use it to get personal revenge. Lisbon and the team are of course disgusted and disappointed by his reaction, and the insult to their jobs. In typical Jane fashion, he apologizes and then re-offends a few times before he finally comes to an understanding with Lisbon. Jane still thinks the war on crime is fruitless, but he confesses that he has “nothing else to do” and needs to work. Lisbon relents, allowing him back on the team if he promises good behavior. She is then shocked by a warm hug from a grinning Jane.

The case involves a murdered woman found in a hotel room. With quick deduction on Jane’s part and some Internet searches on Van Pelt’s, the CBI team discovers that she’s a suburban mother who stole a million dollars from her company and then went into hiding. Back at home she has a confused husband, angry daughter, and a son just recovering from cancer.

Jane gets Cho (Tim Kang) to drive him to the first empty house for sale in the neighborhood. Jane checks the mail in the box and notes the name of the former occupant, Miles Thorsen. Cho goes along for the ride, even though he’s annoyed Jane won’t tell him what he’s doing.

The team interviews the victim’s family, the yoga instructor she was having an affair with, her boss, and the company’s financial officer. No one knows where the million dollars is, and from the looks of the victim’s trashed apartment, the killer didn’t find it either. Though Lisbon keeps trying to rein Jane in and cover for his blunt questions, she can’t stop him from asking each of the interview subjects if they know Miles Thorsen.

In the middle of the investigation, Jane goes to see Agent Bosco to offer his knowledge of the Red John case and be kept in the loop. Bosco coldly tells Jane that he’s a “clown, a party entertainer”, and that he won’t give him any information on leads in the case: “I wouldn’t tell you where the bathroom was if your ass was on fire.” Asked if he comprehends the situation, Jane smoothly says “I understand you. It may take you some time to understand me.” He’s got that scary look in his eye, and we know Jane’s not going to let this just slide.

Jane convinces Cho and Rigsby (Owain Yeoman) to sit in Thorsen’s empty house. Jane explains that all of the suspects have Thorsen’s name and the killer will be desperately curious to know why he’s relevant to the case. All they have to do is wait for him to show up. As they wait, Jane looks through a box of the victim’s belongings. He finds a library book about the history of the fax machine, which seems an odd choice. When Rigsby becomes annoyed by Jane defying Lisbon once again, Jane sends him off to the library to wait for his phone call.

Jane and Cho wait, and eventually the victim’s boss shows up at the house. Jane says he guessed it was her all along. The boss stole the money from her own company, and when the victim discovered her crime, the boss cut a deal with her. She paid to have the victim’s son put in the best cancer treatment center, and paid her a monthly salary to stay away and take the heat for the crime. The accounting book with proof of the crime was hidden in place of the fax machine book at the library, along with a DVD of the victim, explaining why she did what she did.

The CBI team shows the victim’s family the DVD, and they finally know the truth that their mother traded her own life for her son’s. While Lisbon is distracted, Jane makes a phone call to administration. Pretending to be Agent Bosco, he asks how he can go about changing his in-house access pass code. There’s a hint of a smile on his lips as he waits on hold. We knew he wasn’t going to let Bosco get away with the Red John case.