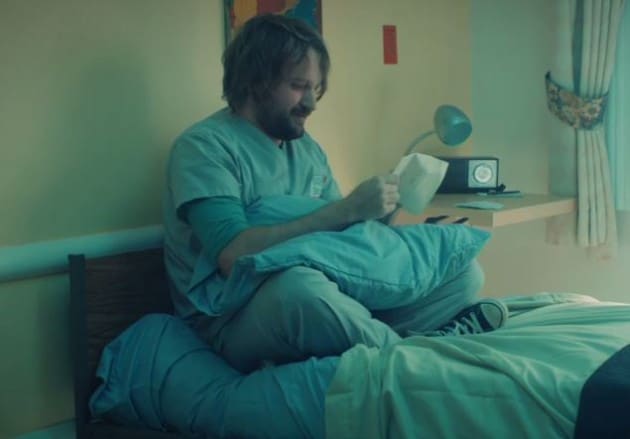 Big Time in Hollwood, FL is like a season of Key and Peele meets Burn After Reading: laced with the cinematic homages of the former, and the under-appreciated ironic comedy of the Coen brothers film (with a bit of Eastbound and Down sprinkled on top), Big Time has established itself as a unique little serialized comedy in its first three episodes on air. What it does, it does very well: be it the constant shift into cinematic absurdity, nodding to everything from 28 Days Later to The Wolfman and The Shawshank Redemption in the space of a single half-hour. While this doesn’t necessarily lend itself to rewarding stories about its cast of characters – in fact, the format of the show almost demands it doesn’t do this – it does make for some hilariously outrageous comedy.

Of the two post-pilot episodes of Big Time, “Rehabilitation” really puts the show’s specific set of talents on full display, kicking the story into high gear when Diana hires creepy private investigator Harvey Stoles (Michael Madsen) to follow and confront simple-minded Del, photographed buying drugs for Jack, who is trying to overdose so he can be sent to the same rehab facility as his brother, Ben. Unexpectedly, “Intervention” had curbed the police investigation into Jimmy’s death, which appeared to resolve the show of the most dramatic piece of its premise – but “Rehabilitation” offers something even juicier in its place, with Harvey’s shady comments about how he stopped murdering people, but still has a deep enthusiasm for scaring Del straight when there’s a paycheck on the line. Madsen’s presence adds a different type of energy to Big Time, one that operates on the same idiotic mental plane as its protagonists, but giving the show texture by adding an antagonistic presence with his own individual set of motivations (which appear to include Diana herself, given the suggestive camera angles of their interactions).

“Rehabilitation” also puts its best asset – Stephen Toblowsky as Alan, Ben and Jack’s father – front and center, isolating him from Diana as he goes shopping for a car that Jack can use to travel from his terrible neighborhood to family dinner on Sunday (but not before giving us a hilarious scene between him and his wife: “You’re hitting these pockets too hard!”). Alan’s story in “Rehabilitation” is a fantastic little aside into the twisted universe of used car salesmen: watching Alan try and get straight talk from either salesman (who both leave for extended periods during Alan’s appointment, with one going to get a full, molded set of braces while “talking to his boss”) is great. I could watch Toblowsky read the phone book – so anything that allows him to lip sync opera in an old Volvo he just spent the entire day trying to buy, only to get it wrecked at a stop sign by his drugged out son is a special, special treat (“Honey, I just had one of the worst days ever!”).

No, Big Time in Hollywood, FL is not a show of deep characters or particularly unique story: it’s a comedy of errors, where bumbling idiots meet their karmic comeuppance. However, the visual aesthetics and complete dedication to its comedic stylings make for a much more intriguing watch than it may seem from the outside: while I initially lamented its lack of redeemable characters, the second and third episodes make a strong argument that the show is better for not having it, leaving more room for cinephilic nods and hilarious exchanges between Diana and Alan about their misunderstood children – it remains to see how much it will be able to wring out of that, but it’s certainly off to a good start.