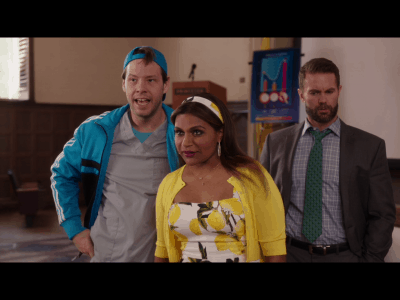 The news broke earlier today of Chris Messina’s downgrade from series regular to guest star for the upcoming fifth season of The Mindy Project. Needless to say, I was distracted with the implications of what that could possibly mean for the direction of the show’s future as I watched this episode. All signs are pointing to an inevitable Jody and Mindy romance especially as they’re both now aware of their feelings for the other.

Jody usually moves so slowly to do anything with his Southern drawl that Mindy was rightfully surprised to return from Texas to see he’s got a somewhat serious girlfriend now. Courtney even tags along for the ride to Princeton for the Later Baby presentation at Mindy’s alma mater. Mindy couldn’t make her dislike of Courtney anymore obvious but only Morgan knows why. In the biggest twist of all, Mindy voices her curiosity to Morgan by reenacting that “weird” moment on her couch a few weeks ago. She definitely felt something since she got him a personalized belt buckle in Texas when the rest of her souvenirs were from the airport. To complicate matters, Morgan already knew about Jody liking Mindy so he’s really caught in the middle here.

Mindy doesn’t let Jody concern her too much yet at least. She’s bothered by Courtney but won’t allow herself to admit anything more since it appears Jody’s moved on as well. As viewers of a show once considered a great rom-com, we can all assume where this is headed. There’s 4 episodes left in the season. Plenty of time to get Mindy and the Princeton football coach together and broken up, as well as Jody and Courtney once Mindy and Jody both stop playing games. I’m not sure I’m entirely on board with this relationship when we spent the previous 3 years shipping Mindy and Danny. Suddenly he flipped a switch and turned into a jerk and he’s completely written off. Not completely, but you know what I mean. Mindy’s written him off as just her son’s father.

The humor of the show is thankfully still intact so long as Morgan is around. When Mindy’s life isn’t going as we’d all hoped and planned, at least we’ll always have Morgan to look on the bright side of things.

How do you feel about the slow build to a Jody and Mindy relationship? Are you disappointed and maybe opting to pretend this Hulu pickup never happened and the series ended with Mindy and Danny on good terms? Or are you not afraid to admit you’re excited to see where this goes for Mindy’s sake? After all, we’re all Team Lahiri. A large majority of the audience just so happened to buy into the Mindy and Danny relationship as endgame, so it’s hard to accept when things are truly over.

Tensions rise as Mindy opens up to Morgan about her potential feelings for Jody on a Later Baby business trip to her alma mater.