Home
Television
Meet The Cast Of “The Gilded Age” 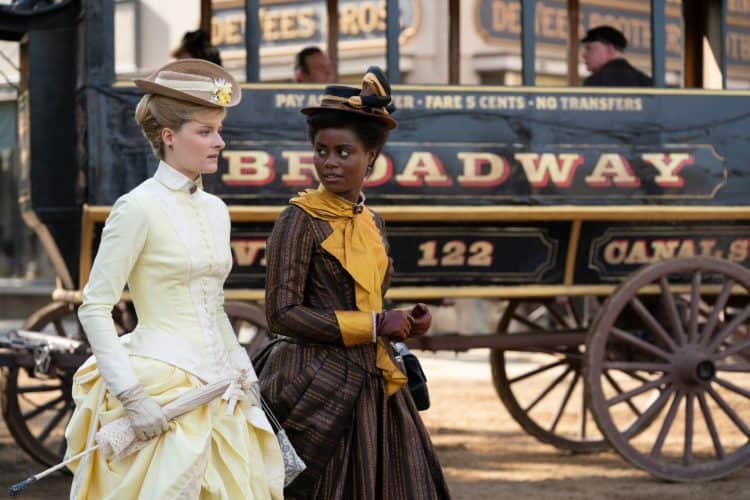 For fans who loved following the story of the upstairs and downstairs people in Downton Abbey, The Gilded Age should be a treat. The upcoming HBO drama is created by the same showrunner as Downton Abbey, Julian Fellowes. As with other shows helmed by the legendary screenwriter, The Gilded Age is going to portray a turning point in history, this time the 1880s Gilded Age in New York, a period characterized by rapid economic growth in the United States. The show’s official synopsis, according to HBO, goes as follows: “The American Gilded Age was a period of immense economic change, of huge fortunes made and lost, and the rise of disparity between old money and new. Against this backdrop of change, the story begins in 1882 — introducing young Marian Brook, the orphaned daughter of a Union general, who moves into the New York City home of her thoroughly old money aunts Agnes van Rhijn and Ada Brook. Accompanied by Peggy Scott, an accomplished African-American woman, Marian inadvertently becomes enmeshed in a social war between one of her aunts, a scion of the old money set, and her stupendously rich neighbors, a ruthless railroad tycoon and his ambitious wife, George and Bertha Russell.” With the show featuring events that primarily occurred in the United States, most of its cast will expectedly be portrayed by American actors, unlike Fellowes’ previous shows. Here are the cast members of the upcoming historical drama The Gilded Age.

The legendary actress Christine Baranski leads the actors who will be portraying characters in The Gilded Age. Baranski will play Agnes van Rhijn, an old-rich socialite who clings to the old-fashioned values of New York’s elite despite the world around her changing at a rapid pace. Baranski is best known for playing Diane Lockhart in the drama series The Good Wife and The Good Fight, as well as Dr. Beverly Hofstadter on Big Bang Theory, for which she received four Emmy nominations. She also played a lead character alongside Meryl Streep and Julie Walters in Mamma Mia! as well as Mamma Mia! Here We Go Again. In an interview with The New Yorker, Baranski described how her character on The Gilded Age is written: “Julian does write me very funny, very tart. I’m just this elegant old curmudgeon. I am welcoming the wigs and the corsets and the exactitude of language. I’m allowed to use all my Juilliard training.” She also swooned over the casting of the show, vouching for the acting prowess of everyone who’s been cast on The Gilded Age: “I’m telling you, everybody who ever won a Tony is on “The Gilded Age.” They were all available this year because of the pandemic. It will be a rude awakening when a lot of these biggies go back to their Broadway careers. Also, so many great people passed away last year. Terrence was the first. My heart breaks that the lights could not be dimmed for Terrence McNally. He was such a lover of the theatre.”

Another prominent actress set to appear on The Gilded Age is Cynthia Nixon, who we all know as Miranda Hobbes on Sex And The City. She’s also appeared in major blockbusters like Killing Reagan, A Quiet Passion, The Only Boy Living In New York, and The Parting Glass. When she’s not busy working in front of the camera, Nixon is pretty active lending her fame to progressive causes. Nixon ran for governor of New York in 2018, challenging then-governor Andrew Cuomo. On The Gilded Age, Cynthia plays Ada Brook, Agnes’ sister. In an interview with Variety, Nixon talked about the challenges, especially for women, of shooting the show. “We have a lot of women in our cast,” she said. “Between the corsets and the wigs and the hats, it takes a while for each of us to get dressed, and they have greatly scaled down the wardrobe personnel,” Nixon said. “So I think on a day when there are six of us shooting and let’s say four or five of us are women, we’re only going to have two wardrobe people to do that. That’s going to be an enormous amount of people waiting around.”

Fellowes also cast Carrie Coon on The Gilded Age, playing a character named Bertha Russell. We know Carrie Coon for her roles on The Nest, Ghostbusters: Afterlife, and the upcoming Boston Strangler. Coon is also a veteran of theater, with her last onstage performance being Bug at the Steppenwolf Theatre Company in Chicago. In an interview with Collider, Coon talked about the elements of The Gilded Age that will appeal the most to longtime fans of Downton Abbey. “Well, of course, it’s everything Julian Fellowes does well with the added pleasure of being on HBO. I think Downton Abbey fans will be gratified by the fact that we get to be a little more edgy and a little more relevant to what’s happening in the world, but not in a way that is offensive, right? It’s not about suddenly everyone’s naked. It’s still that flavor. It’s still that time period – well, you know, it’s 1890s to the 1920s, or what have you. It’s a really interesting time to be telling that story because it was really when our economy was most stratified. You had all of these new money billionaires coming in, and people were getting poorer and poorer. And it’s really quite politically savvy to tell this story right now, and I hope that people can, as you mentioned earlier, process some things that are happening in the world but at some remove and I think it will be really, hopefully, healing.”

Morgan Spector plays George Russell in The Gilded Age, a robber baron who represents the changing face of New York’s elite. Spector appeared in numerous TV projects over the past decade, including Allegiance, The Mist, Homeland, and Pearson. He also has an extensive movie career, which includes Permission and Vigilante.

Denee Benton portrays a writer in The Gilded Age. Outside of the series, she’s most popularly known as portraying Eliza Hamilton in Hamilton. The Gilded Age is also expected to feature Louisa Jacobson (who will play Marian Brook), Taissa Farmiga, Blake Ritson, Simon Jones, Harry Richardson, Thomas Cocquerel, and Jack Gilpin. Actors who will be having guest or recurring roles on the show are Patrick Page, Douglas Sills, Amy Forsyth, Nathan Lane, and Audra McDonald.

Exploring The Themes in The Power of The Dog

Why The Man From U.N.C.L.E. Sequel Won’t Be Happening