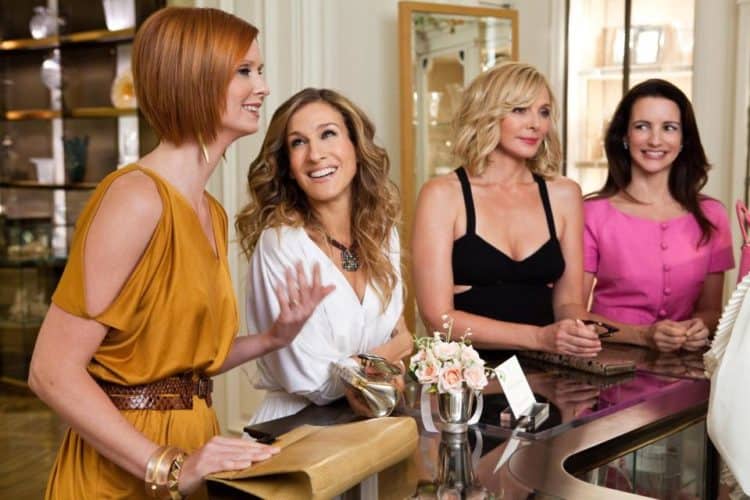 When the glitz and glamour of New York City is mentioned, it’s hard not to think about Carrie Bradshaw, portrayed by Sarah Jessica Parker (Failure to Launch) and her gang of girlfriends – Charlotte York, Samantha Jones, and Miranda Hobbes portrayed by Kristin Davis (Holiday in the Wild), Kim Cattrall (Star Trek VI: The Undiscovered Country), and Cynthia Nixon (Ratched), respectively. It’s been more than two decades since The Sex and the City franchise first premiered, but it is still able to stay relevant up to this day. Girls all over the world can still relate to Carrie’s shoe-loving and shopaholic tendencies, as well as their “hoes over bros” mind set, wherein girlfriends come first. The upcoming revival of the series, And Just Like That… is already sending shockwaves throughout Hollywood, and getting the show’s fans excited beyond measure. Here are five life lessons we learned from binge-watching all six seasons of Sex and the City:

5. There is more to life than marriage

Women have this common notion that they need to settle down at a certain age. This is thankfully disputed in the series, as one of its common themes is to just trust the timing of your life. Marriage may be a major step in a woman’s life, but this does not mean that unwedded women beyond their 30’s can’t live their life to the fullest. The four leads of the show are the epitome of strong and independent women. They know what they want, and how to get it. They also aren’t scared to be “left behind” even if women their age are scrambling to get hitched. There is so much more to life than a ring on your finger. Enjoy your singlehood, and make the most out of each moment.

4. Good friends are hard to find, and lucky to have

Friendships are one of the most valuable relationships in life. As they say, it is so much better to have a few good friends than having a lot of fake friends, who are only there for the good times. The series revolves around the unwavering friendship of Carrie, Charlotte, Samantha, and Miranda, who are always there for each other through the ups and downs of life. Knowing that you have a group of gals to lean on when the going gets tough is one of the best feelings in the world. The four girls proved that friends are the family you choose, and that sisterhood can extend outside the four walls of your house. Life may be filled with imperfections, but having the right people by your side makes everything worthwhile. As Carrie once said, “Dreams change, trends come and go, but friendships never go out of style.”

Other people are free to like different things. The series’ foursome may not always see eye-to-eye, but they are able to accept each other’s quirks and kinks. This is most important, especially when you want to maintain long-term relationships. Learn how to respect each other’s opinions, and know when to agree to disagree. Having differing points of view can also spice things up, and give you more things to talk about. It’s all about being open-minded and not allowing your personal judgements to take you down. The stars of the series are able to apply this with ease, which allowed them to maintain life-long relationships that have stood the test of time.

The series was refreshing in a way that it featured flawed characters. After all, no one is perfect, so you do not have the right to condemn others for their mistakes. Carrie and her friends have made mistakes in their personal and professional lives in one way or another. It’s all about learning from them and bouncing back. Resilience is not often talked about these days. This one of the qualities that you must possess in order to succeed in life. Mistakes and missteps are oftentimes unavoidable. Learning how to deal with them when put in the same position in the future, and having a positive mindset will be able to get you through the tides of life.

1. Grab every opportunity by the horns

All the women in the series are empowered with a capital “E”. They are all career women who excel in their own fields. If there is one thing that they have taught us, it’s to not be afraid to assert yourself and to learn how to seize every moment. Carpe diem! Being a woman in a man’s world is no walk in the park. There are still a lot of glass ceilings to break through. It all starts with spotting windows of opportunity where you can prove yourself and your capabilities. Always remember that if you don’t go after what you want, you’ll never get the chance to have it.