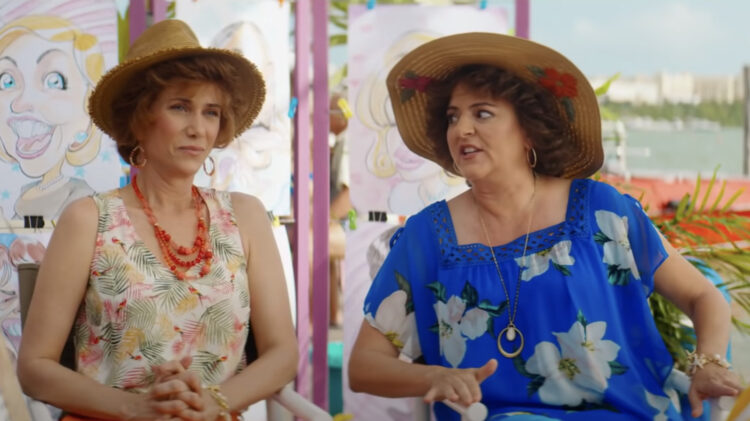 Apple TV+ is set to drop a new period comedy miniseries. Titled Mrs. American Pie, the show is based on the novel Mr. and Mrs. American Pie by Juliet McDaniel. The show is created by Abe Sylvia and directed by Tate Taylor, who previously worked on The Help, Get on Up, and The Girl on the Train. Deadline describes the show’s plotline as follows: “Mrs. American Pie is a story about gorgeously impossible people. Set during the powder keg era of the early 1970s, it follows Maxine Simmons (Kristen Wiig) and her attempt to secure her seat at America’s most exclusive table: Palm Beach high society. As Maxine attempts to cross that impermeable line between the haves and the have-nots, the series asks the same questions that baffle us today: Who gets a seat at the table, how do you get a seat at the table, and what will you sacrifice to get there?” Mrs. American Pie features an ensemble cast of A-list performers. If you want to learn more about the actors appearing in this show, read ahead. Here are the cast members of the upcoming series Mrs. American Pie.

Kristen Wiig is set to star in Mrs. American Pie as Maxine Simmons. She is best known for her work on the NBC sketch comedy series Saturday Night Live from 2005 to 2012. Wiig has also appeared in a number of films, including Unaccompanied Minors (2006), Knocked Up (2007), Ghostbusters (2016), Downsizing (2017) and Wonder Woman 1984 (2020). A native of New York City, Wiig began her career as a cast member on the improv comedy series The Groundlings before joining Saturday Night Live. She has been nominated for two Emmy Awards for her work on the show. Wiig’s films have grossed over $3 billion worldwide.

Veteran actress Laura Dern has also been tapped to star in the upcoming TV series Mrs. American Pie. Laura Dern is an American actress known for her versatile performances in a variety of genres. She has received critical acclaim for her work in films like Rambling Rose, Blue Velvet, and Wild at Heart. In addition to her Academy Award-winning performance in Marriage Story, she has also earned Golden Globe Awards for her work in the television series Big Little Lies and Enlightened. Throughout her career, Dern has demonstrated a willingness to take on challenging roles, and she has consistently delivered powerful and memorable performances. She is truly one of the most talented and respected actresses working today, and fans are lucky to witness her acting prowess once more in Mrs. American Pie.

Another acting legend who’s joining the cast of Mrs. American Pie is Allison Janney, who has been tapped to portray the character of Evelyn in the show. Allison Janney is an actress who has received critical acclaim for her work in both film and television. She first came to prominence with her role in the sitcom The West Wing, for which she won numerous awards, including an Emmy. She has since gone on to star in a number of films, including the Oscar-winning I, Tonya. Janney is also a Tony Award nominee and has won multiple Golden Globes and BAFTAs. In addition to her acting work, she is also an active philanthropist. Janney is truly a multi-talented individual who has had a successful career in both the entertainment industry and beyond.

Leslie Bibb will be playing the character of Dinah in the upcoming series Mrs. American Pie. Bibb is best known for her role as Brooke McQueen on the WB Network dramedy series Popular. She began her acting career in the early 1990s with guest appearances on several television shows before landing her breakout role on Popular in 1999. For her performance on the show, she received a Teen Choice Award for Television Choice Actress. After the series ended in 2001, Bibb went on to appear in a number of films, including Spider-Man 2 and Talladega Nights: The Ballad of Ricky Bobby. In recent years, she has starred in the ABC series American Housewife and the Netflix comedy God’s Favorite Idiot. Leslie Bibb is a talented actress who has enjoyed a successful career in film and television.

Ricky Martin will be playing the role of Robert in Mrs. American Pie. Most people would recognize Martin for his work in music. He is a singer, songwriter, and actor who began his career as a member of the Puerto Rican boy band Menudo. He rose to prominence during the early 1990s, thanks to his catchy pop tunes and energetic stage performances. After leaving Menudo, Martin embarked on a highly successful solo career, releasing a string of hits including “Livin’ La Vida Loca” and “She Bangs.” In addition to his music career, Martin has also appeared in a number of films and television shows, including the popular drama American Crime Story. He has also been an outspoken advocate for LGBTQ rights and is currently married to artist Jwan Yosef. With his good looks and undeniable talent, Ricky Martin is one of the biggest stars in the world.

Actor Josh Lucas will also be starring in the upcoming series Mrs. American Pie. Lucas is an American actor who has appeared in a wide range of films, from blockbusters to independent features. He first gained attention for his breakout role in the 2000 film American Psycho, and has since gone on to star in such projects as You Can Count on Me, A Beautiful Mind, Sweet Home Alabama, Poseidon, and The Lincoln Lawyer. In recent years, Lucas has also appeared in a number of successful television series, including The Firm and The Mysteries of Laura. While he is best known for his work in film and television, Lucas has also appeared onstage in productions of The Parisian Woman. No matter what medium he is working in, Josh Lucas always brings his signature charisma and charm to his performances.

Legendary performer Carol Burnett is back on the small screen as Norma in Mrs. American Pie. Burnett first gained popularity on the television show The Carol Burnett Show, which ran from 1967 to 1978. Throughout her career, she has appeared in numerous stage and screen productions. In addition to her work as an actress, she is also a published author and philanthropist. Carol Burnett has won multiple awards for her work in television and film, including the Golden Globe Award for Best Actress in a Television Series – Musical or Comedy. She has been inducted into the Television Hall of Fame and the Hollywood Walk of Fame, and she received the Kennedy Center Honors in 2003. In 2019, she was awarded the Lifetime Achievement Award at the Golden Globe Awards.

Last on the list is Amber Chardae Robinson, who will be playing Virginia in Mrs. American Pie. She has previously appeared in Stubas, Judas and the Black Messiah, and Always a Bridesmaid.

Other actors expected to appear in a recurring capacity in Mrs. American Pie include Jordan Bridges as Perry Donohue, Kaia Gerber as Mitzi, Jason Canela as Eddie, Mindy Cohn as Ann, Julia Duffy as Mary Jones Davidsoul, and Claudia Ferri as Raquel.