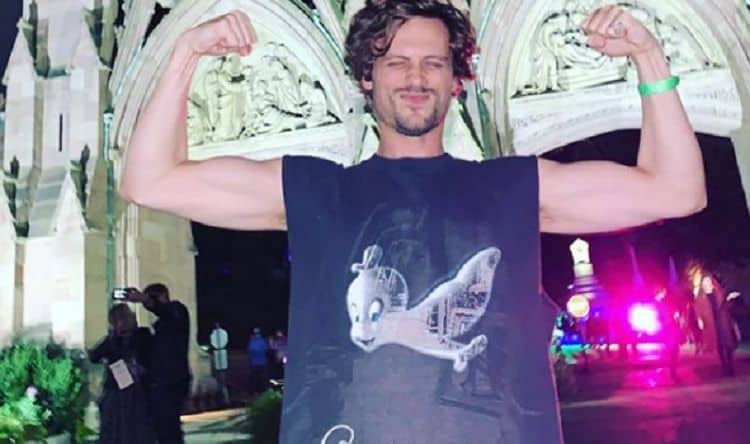 TV star, filmmaker, painter, bestselling author — if you want to feel inadequate about your own talents, a quick glance at Matthew Gray Gubler’s resume should do the job. 2020 may be the year he waves goodbye to Criminal Minds, CBS’s smash crime drama, but with a bag of tricks the size of a small country up his sleeve, it’s unlikely he’ll be away from our screens for long. Find out more about the actor with these 10 little facts.

1. He started his career as a model

After graduating from the Las Vegas Academy of International Studies, Visual and Performing Arts, Gubler enrolled in a film directing course at New York University’s Tisch School of the Arts. While there, he was spotted by a model scout and quickly bought onto the books at DNA Model Management. A succession of highly successful jobs with the likes of Tommy Hilfiger, Marc Jacobs, and American Eagle followed, and within next to no time, he was ranking 46th on models.com list of the top 50 male models of the time.

2. He made his film debut in The Life Aquatic with Steve Zissou

3. He has a passion for filmmaking

Acting isn’t the only avenue of the entertainment industry Gubler has made a name for himself in. His endeavors in filmmaking began in 2004 with the documentary, Matthew Gray Gubler’s Life Aquatic Intern Journal, a behind-the-scenes look at the experience of making The Life Aquatic with Steve Zissou. He’s subsequently directed and starred in a series of “mockumentaries” entitled Matthew Gray Gubler: The Unauthorized Documentary, not to mention multiple episodes of Criminal Minds.

Gubler has a secret (or not so secret, depending on how much of a fan you are) passion for painting. Since 2005, he’s been keeping his website flooded with the results of his artistic endeavors in watercolor, gouache, oil, and paste. He’s no amateur dabbler, though: in September 2005, a selection of his works was exhibited at the Gallery of Fine Art in Ostrava, Czech Republic, with every painting selling within the day. He’s also exhibited at The Little Bird art gallery in Atwater Village, California and had his works featured in Juxtapoz magazine.

Filmmaker, actor, artist, and, as of 2019, published author- if there’s an end to Gubler’s talents, we’ve yet to see it. Gubler’s first book, Rumple Buttercup: A Story of Bananas, Belonging and Being Yourself, hit the shelves in April 2019. Although advertised as a children’s book, the writer himself sees it as having a much broader appeal, telling Parade ” (it’s) for anyone who’s ever felt like they didn’t quite fit in, just to make them know that they’re not alone… My hope in writing the book was to find a way to give the world a 136-page hug.” The world obviously appreciated the hug as within weeks of its release, Rumple Buttercup: A Story of Bananas, Belonging and Being Yourself was sat in pole position on the New York Times Best Sellers List.

If you’re planning a wedding and like the idea of a celebrity holding court, Gubler might be just the man you need. In October 2014, the actor became a certified minister; the following month, he put his new skills to the test when he officiated over the wedding of his Criminal Minds co-star Paget Brewster and her partner, Steve Damstra.

7. He has mixed feelings about the end of Criminal Minds

2020 will see the 15th and final season of Criminal Minds air. Considering Gubler has starred on the show since 2005, it’s probably not surprising he’s got mixed feelings about its end. “It’s a little bit like going to like your grandfather’s 110th year on earth, and he passes away, and you’re going to his funeral, and you’re like, “Oh, he was 110 and he had a great life,” he shared with Parade. “We’re sad, of course, to see it go, but at the same time, I feel like we all really gave it our best, and we, hopefully, told some stories that made the world a little happier.”

Considering how thinly he spreads himself across his numerous activities, it’s hardly surprising to learn Gubler is something of a workaholic. “My job is really time-consuming, but it is the greatest in the world!,” he told Mademoiselle Robot“I love to work, even when I worked for retail shops in high school, nothing is better than a long hard day of work. If I don’t fall asleep exhausted it feels like a waste of space.”

Gubler has been active in the industry since 2004… and the results show. According to the latest information from Celebrity Net Worth, the actor is now worth an estimated $10 Million, a figure no doubt helped along by the $3.5-4 million per year he earns from Criminal Minds.

10. He damaged his knee in a dance-off

In 2009, Gubler hit the floor of a Mexican dive bar during a dance-off with fellow 500 Days of Summer co-stars Geoffrey Arend and Joseph Gordon-Levitt. The damage to his knee was so extensive, he couldn’t walk for over 4 months. It took three surgeries and a further 5 months before he was able to walk without a cane.