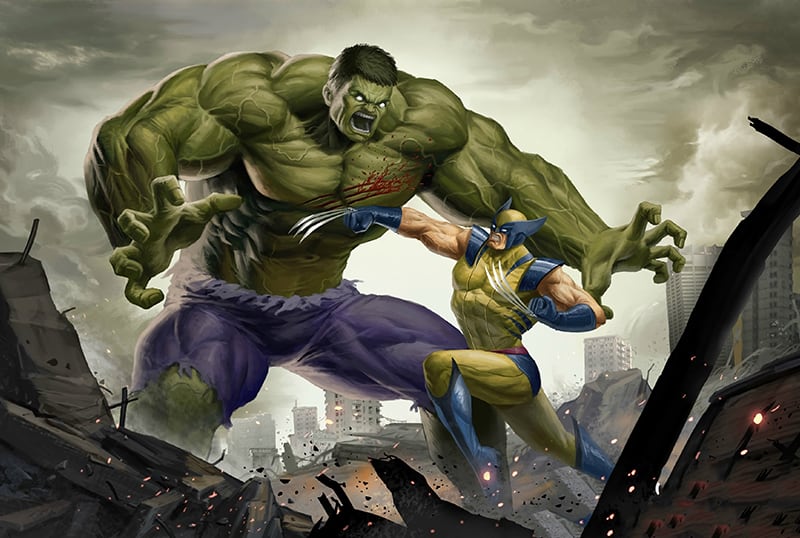 It’s possible that Grant Hermanns of Coming Soon might need to brush up on just how popular Mark Ruffalo’s Hulk really is in the MCU at the moment since considering that he was a desired character when the Avengers movies came out, his role in Infinity War and Endgame were absolutely horrible thanks to the decisions by the studio to make Hulk chicken out or ‘teach Banner a lesson’ as the rumor goes. The Hulk has been vastly decreased in power and character in the last two movies, to the point where he actually finds violence abhorrent and isn’t going to get physical unless there’s no other choice. That might actually be an issue if Ruffalo really wants to take on a Hulk and Wolverine movie since the two heroes haven’t always been so buddy/buddy with each other in the past, and trying to make it that way right off the get would be a very, VERY bad idea since like it or not, fans of the comics and the animated feature that pits the Hulk against Thor and Wolverine in two different stories makes it clear that the green goliath isn’t about to do anything less than try to pound the ol’ canucklhead into the ground. Wolverine also isn’t much of a talker when it comes to getting his hands dirty and the whole idea of him fighting the Hulk has usually been based on the premise that the Hulk is his assigned target and that he’s been sent to neutralize him.

Thanks to healing factor that’s every bit as good as Wolverine’s though, the Hulk has managed to survive a number of injuries that would have easily put down any other enemy, and has even beaten Wolverine a number of times. One reason this fight is so great and so desired however is that it pits two of the most popular characters from the Marvel universe who are in fact actually very well-matched since Wolverine with his healing factor and adamantium skeleton, and his various fighting skills, are still enough of a match for Hulk and his healing factor, immense strength, and hair-trigger temper. If it were to be an intelligent Hulk taking on Wolverine then things would likely be different, a World War Hulk managed to knock Logan unconscious without killing him. But the Hulk has ripped Wolverine in half before, has knocked him around quite a bit, and has basically made it clear that he’s not messing around. Wolverine on the other hand has made it just as clear that he’s pulling no punches when it comes to his big green opponent and has sank his claws into the Hulk’s body uncounted times over their long history. At some point they managed to grant one another a bit of grudging respect, but as many people would state, Wolverine still has no real chance at beating the Hulk, no matter how stubborn he is or how many times he gets the drop on him. This fight is for the most part a David and Goliath type battle, with that small margin of victory being possible for the David figure, so long as Goliath isn’t smarter and far more capable of smashing his opponent into the ground.

If this movie were to happen, and that’s a big IF right now, I almost believe it would be better to take Ruffalo out of it and bring back the idea that Banner is okay with violence so long as it serves a purpose, instead of behaving like a pacifist that complains about causing a little damage now and then to be convincing. The Hulk doesn’t need to be a continual rage monster all the time, but instead of whining and bemoaning the idea of getting a bit rowdy it’s far more enticing to see Banner give into his urges to be destructive at times, and when it comes to a knockdown, drag-out fight between Hulk and Wolverine, there’s no other way to go since Hulk tends to throw Wolverine through anything he can find or tries to smash him with anything he can pick up. Giving in to making a movie about this team-up, which would be a vs. movie to start with, would be delivering on something that fans have been wanting for a long, long time. The only downside is that if Ruffalo is involved it’s likely we’d get the pacifistic, more intellectual Hulk that was seen in Endgame, and not the savage, bestial creature that Wolverine has tangled with so often. In the end the two would likely end up teaming together to take down a shared enemy as they did in Hulk vs. on DVD, but the initial scrap would definitely be something to watch since in the comics it’s been nothing less than awesome, if somewhat one-sided now and again.