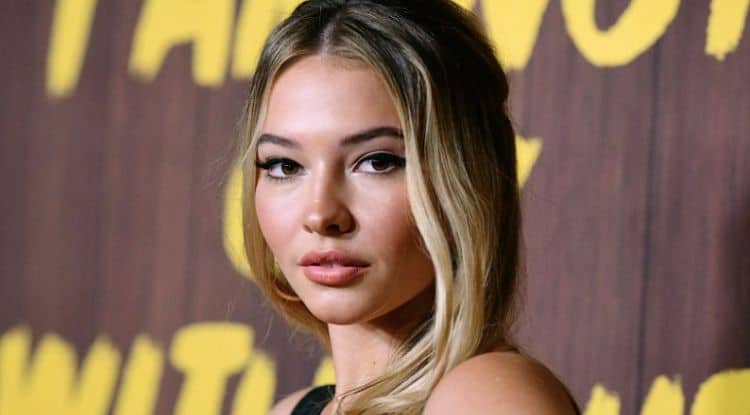 If Madelyn Cline’s face looks familiar to you, it’s probably because she’s made appearance in quite a few popular shows. Madelyn has been in shows like The Originals and Stranger Things. While those two credits are impressive in and of themselves, none of her previous opportunities compare to one she was given recently. Madelyn was cast as Sarah Cameron in the new Netflix series, Outer Banks, and it looks like this could finally be her big break. Although the show has only been streaming for a few days so far, Madelyn and her co-stars are already making a splash. Here are 10 things you didn’t know about Madelyn Cline.

In a lot of ways, acting and modeling go hand in hand. With that being said, acting isn’t the only time Madelyn Cline has gotten in front of a camera. She’s also done some modeling and appeared in print ads for companies like Tiff.

2. She’s Never Been To The Outer Banks

Despite the show being called Outer Banks, Madelyn has never actually been there. This is due to the fact that the show is actually filmed in South Carolina. Netflix decided not to shoot at the actual Outer Banks because the streaming service does not agree with the conservative laws that North Carolina has passed in regards to the LGBT community.

3. She Likes To Ride Horses

Although it can seem like actors are too busy to enjoy doing anything other than work, that isn’t the case. Madelyn still likes to make time to do the things she enjoys.  Outside of acting, Madelyn also likes to ride horses. She didn’t go into detail to explain if this is something she’s ever done at a competitive level.

4. She Can Speak Some French

According to Madelyn’s Screen Actors Guild page, she can speak French on a conversational level. The ability to speak another language will definitely come in handy as Madelyn moves further along in her career.

If there’s one positive thing about social distancing, it’s that given people the space and opportunity to learn new skills and practice old ones. One of the things Madelyn is doing during this time is learning to play the guitar.

6. She Can Relate To Her Character

Lots of actors don’t care whether or not they can relate to a character they’re playing. However, having a sense of familiarity with the person you’re playing can definitely make it a little easier to get into character. Although Madelyn and Sarah are very different people, Madelyn said she was able to see some similarities. In an interview with Glamour, Madelyn said, “It’s interesting because I feel in a lot of ways I relate to Sarah because we are both from the South and I feel, shooting this, I kind of fell back in love with the South. There are a lot of lessons I feel Sarah learns in the first season about finding her voice when she feels something isn’t right, going against the grain and standing up for what she believes in, versus what she’s told to believe in.”

7. She Dropped Out Of College

Madelyn can definitely connect to the aspect of Sarah’s character that is finding her voice. This is something Madelyn also had to do shortly after she went away to college. While at school, she realized that she wasn’t happy and it was time to follow her heart. Although she knew her parents wouldn’t agree, she called home and explained that she would be dropping out of school to pursue acting.

8. Her Acting Career Got Off To A Rocky Start

There are some actors who find success with their first few audition and things just take off from there. That isn’t how things worked out for Madelyn Cline. She says that when she first moved to Los Angeles she was dealing with a lot of rejection. However, she stayed persistent because she knew she had something to offer that would eventually be noticed.

9. She Has A Close Relationship With Her Cast Mates

Madelyn says that her cast members were one of the best things about shooting Outer Banks.  They all formed strong bonds that have continued off set. It’s a good things worked out that way since they’re all staying in the same apartment building during this quarantine period.

Madelyn’s interest in entertainment started before she began acting. When she was still living in South Carolina she took ballet classes at the Classic Ballet Centre in Summerville. While there, Madelyn studied advanced ballet.