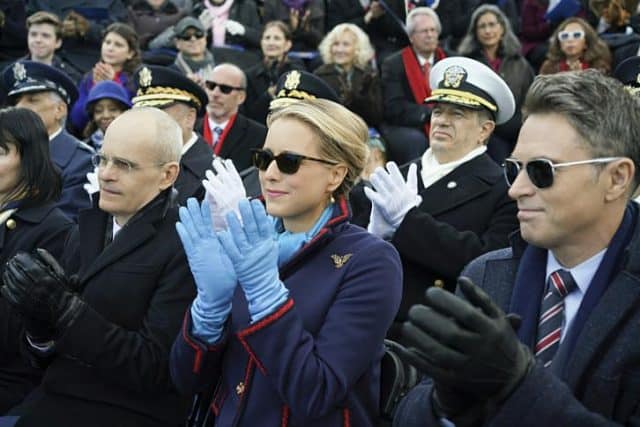 One should not put into practice the idiom of looking a gift horse in the mouth when receiving a gift. On tonight’s winter premiere of Madam Secretary, Elizabeth has no choice but to do so. It’s a matter of avoiding an international controversy between the United States, Mongolia and China.

When the Mongolian Minister of Education said his government would euthanise the horse, my eyes went wide. I mean, I get that they don’t want certain diseases to spread, but they can decontaminate the animal instead. You can do that for humans, why not horses? At least Cuba is willing to take the horse. She can run around on a field somewhere and live its life. Yay for happy endings!

We also see Stevie at her new job as Russell Jackson’s intern. The Chief of Staff gave the eldest McCord the job after she saved his life. That’s very kind of him. It impresses me that Russell Jackson of all people has a heart. Stevie then got to meet one of her idols, a poet named Hobbs. His dismissive attitude toward Stevie was a bit on the rude side. Then again, he just got off a plane after who knows how many hours so I’ll let this one slide. Everyone gets tired and cranky after a long flight. I do applaud the poet, however, when he used Jareth’s words in his poem at the inauguration ceremony. Didn’t know he absorbed all that after passing out from drinking too much. Kudos.

I felt sorry for Blake as he got the brunt of the horse issue. No one deserves to get manure thrown at them unless they did something truly despicable. He loves the horse and wouldn’t let anything bad happen to her. The Secretary’s assistant even named the horse Mandy. If he didn’t live in a studio apartment and had two million dollars to spare, he could keep the horse. I also loved Henry’s “high horse” pun. Good one, show. Good one.

My heart also went out to Stevie and Alison. The former for dealing with Hobbs. When the poet disappeared the next morning, it freaked Stevie out, thinking the worst. It turns out that the man went to get breakfast for them and finish his poem. He could’ve left a note or something. He is a writer, after all. As for Alison, I’m glad that Elizabeth gave her middle child the task of choosing her inaugural ball gown, but the floral one that she chose is not exactly suitable for a political/historical event. I think that Elizabeth should’ve told her daughter the truth when she had the chance, but I get that she didn’t want to hurt Alison’s feelings. Elizabeth McCord, you, ma’am, are a great mother. Good thing everything worked out in the end.

On a more serious matter, Sam Evans is suing Ohio for putting President Dalton on the election ballot. The governor named Elizabeth as the main culprit and even went as far as going after her job. Elizabeth had suggested to the president that they should give Evans a position in the administration. Dalton offered up Secretary of Commerce, but Evans wouldn’t go for it. The governor then said that he wants Elizabeth’s job as Secretary of State (which we all know is never going to happen). The show is called Madam Secretary, not Mister Secretary. I totally applaud Russell for sticking it to Evans at the restaurant and got the latter to drop the lawsuit. Score for Team Dalton!

Elizabeth looks a gift horse in the mouth as she tries to avoid an international controversy in this winter premiere of Madam Secretary.