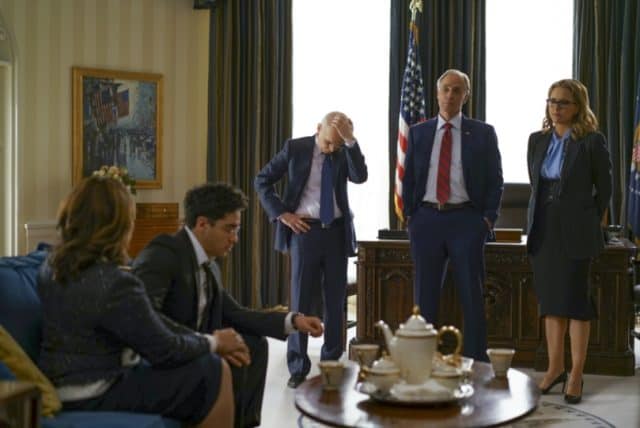 Everyone loves a love story. It doesn’t matter what it is as long as there is a fairy tale happy ending. Though in this week’s episode of Madam Secretary, there’s no such thing as a fairy tale ending.

The whole modern-day Romeo and Juliet thing is an interesting take on political marriages. Usually, a union like this doesn’t last for very long. Or so I’ve heard. At least Juan-Luis and Soledad are smitten with each other instead of having to learn how to love. That is until the latter got all Runaway Bride on her husband-to-be.

I completely understand why she ran away. She wants to be a doctor someday and is afraid that her impending marriage will get in the way of that. When Elizabeth told Soledad that she can still continue her education despite being married, I found myself agreeing with the Secretary. It’s not like she’s going to have a heap of responsibility dumped on her.

I’m sure that Juan-Luis will be there to help her and vice versa. I have to wonder, though, did Soledad end up getting her visa so she can study medicine in the States? I also applaud Elizabeth for asking Daisy and Jay to talk some sense into Soledad and Juan-Luis respectively. That and the latter making their stubborn parents put aside their differences.

On a side note, this whole thing with Juan-Luis and Soledad did not tug at my heartstrings as much as Jay’s situation did. He found out that his wife left him for his best friend, Scott. I mean, why can’t Abby see that Jay is trying to make their marriage work? He even went to marriage counseling! How is that not proof enough? As much as it pains me, I truly think that Jay deserves someone better than Abby. He needs someone who can understand him and not leave him when the going got tough.

I had hoped that these two would work things out, but I guess that’s not happening anytime soon. Daisy also went through a similar heartbreak when Kevin, her new beau, suddenly passed away. It turns out, Kevin Park is not his real name. His name was Joseph Garcia, a CIA operative. Why the CIA had to keep tabs on the State Department, I will never know. Oh, and his death might be a murder as he died from cyanide poisoning. Someone call Sherlock Holmes!

Meanwhile, Ian has begun his infiltration into the new Covenant of John. Everything was smooth sailing until the baptism scene. You’d think it’s a common baptism where the person is immersed in water for a brief moment, but it’s not. It’s a ritual where one must be willing to die for the cause and God. Fingers crossed that he makes it out alive and that he doesn’t get brainwashed.

Elizabeth tries to reunite the son of the Colombian president and the daughter of a rebel leader as part of a major peace deal. Jay and Daisy suffer tragic situations in this week’s episode of Madam Secretary.