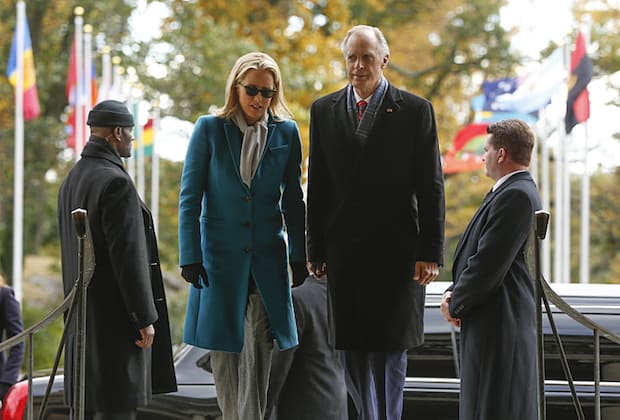 Elizabeth tries to broker peace between Iran and Isreal before hell breaks loose in this week’s episode/winter finale of Madam Secretary. It’s a battle to come back from the brink (in a way) so that there won’t be a World War III.

The hour began with the collapse of Russell Jackson. Stevie performed chest compressions on him before the EMTs arrived. I’m sure that her heart was racing a mile a minute after Russell fell unconscious. Good thing she remembered the steps of CPR or we might find ourselves short of a Chief of Staff. I felt a bit sorry for the eldest McCord child as Russell pressured her into telling him about what’s going on with Iran and Isreal. Even lying on the hospital bed, the man never stops working.

As Russell recovers in the hospital, President Dalton and Elizabeth dealt with the dark cloud that is Iran and Isreal. The former launched missiles at the latter and kidnapped their Defense Minister Weissberg. It honestly baffles me that these two nations can’t put aside their differences and not resort to war-like measures. All the missiles and weapons fired back and forth irked me greatly as I watched the episode. It’s like Iran and Isreal are bullies in the schoolyard fighting for dominance while the United States is the authoritative figure that steps in.

I applauded that Elizabeth was able to find a way to bring both Iran and Isreal to the table to talk about peace. That and the ultimatum that President Dalton gave President Shiraz to release Weissberg and avoid bloodshed. Dalton deserved the re-election. Though the fact that Evans wants to file a lawsuit in Cleveland made my heart skip a beat in fear. The governor knows about Elizabeth’s meeting with the State Senators in Ohio and plans to challenge the election results. I have a good feeling that Dalton will still be the president because of obvious reasons. Wonder if the president will use Evan’s health report against him?

Aside from Russell’s health scare and the chaos with Iran and Isreal, it was nice to see Shane McCord and his daughter Sarah again this season. Sarah has dropped out of school and enlisted in the army, which came as a shock to the rest of the family, but everyone was supportive. Well, everyone except her father. Shane tried asking Henry to talk Sarah out of enlisting. The latter ended up figured it out and is still adamant with her decision. Hope she knows what she’s doing!

Madam Secretary will return with new episodes January 8 at 9/8c on CBS. Photo via CBS

Elizabeth tries to broker peace between Iran and Isreal as Russell Jackson recovers from a heart attack in this week’s winter finale of Madam Secretary.