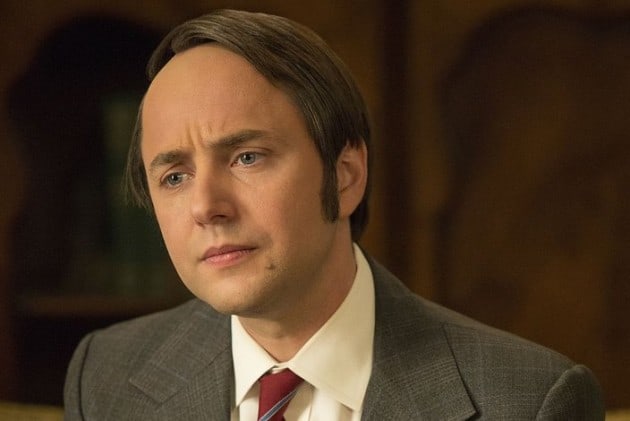 Those are the words that Jim Hobart speaks to the Big Five of Ted, Pete, Don, Joan, and Roger in tonight’s Mad Men. He wants them to stop struggling, to accept the gazillion dollar salaries that are coming their way and the tenfold resources that will be at their fingertips. Hobart just can’t understand why they wouldn’t want this; it’s exactly what they were trying to do at Sterling Cooper & Partners.

But that’s the thing: that’s what they were trying to do at Sterling Cooper & Partners. To get from Point A to Point B, in which these five individuals stood alone as the head of a respected ad agency, took years of work and pain and turmoil. Jim Hobart sees advertising as means to an end, a way to make money and be at the top of the game. But the secret to success at something isn’t being good at the thing; as Isaiah Thomas once said, “The secret to basketball is that it isn’t about basketball.” It’s about the people you do it with, and the relationships you cultivate along the way.

It’s about creating a family, a center of calm and support and motivation in the chaos of running a business or defending LeBron James. It’s about synchronicity and chemistry; it’s about forgoing meetings because you know exactly what you have to do to make sure things go the right way. You don’t have to look to know that LaMarcus Aldridge is at the left elbow; you just run the pick-and-pop and throw the ball where you know he’s going to be.

Sorry. The NBA playoffs just started, and I can’t help myself.

It’s about being more than just individual pieces, is what I’m saying. But that puts you at risk when and if things start to fall apart; you aren’t as valuable to anyone else as you to your specific team. Joan and Peggy (though she isn’t a partner), especially, are in unique situations: if there are other account execs and top copywriters that are women, they most certainly have advanced degrees and probably old money. Pete is also in a similar boat: he’s an insufferable douche nearly all of the time but has an odd way of coming up big at the right moment. They know these things about each other, and how to work around and with each other; the reason they have always fought so hard to keep their own firm is because they’re the only ones who’ll have them.

But at the end of the day, it’s just a job. They’re a family, yeah, but they’re a family united in the goal in running a business. To have a real family, one that loves you unconditionally and without reserve, is something much rarer and harder to find. Every single one of them has been through this and down this road a dozen times before, but it’s telling that out of all them, Don is the only one who has no one to go home to, or out on a date with. Peggy even has Stan, who she admits to that she gave her baby up for adoption, something that she’s only previously talked about with Don. Peggy and Stan sit on the phone, not talking, as they do their work. It’s just comforting for them to be around each other.

Roger has Marie, Pete has Trudy and Tammy (to some extent), Joan has Richard. Ted even has somebody now, an old girlfriend from college. They all, one by one, have places to be, except for Don. You come to realize that Don, more than anybody else, has everything to lose. For a brief moment, Don had the perfect world laid out in front of him: he would get to live in California and keep his job as well. But that was snatched away from him.

That family they’d created is all coming crashing down, and it’s crashing down on Don the hardest. All of them stand to lose something and someone, and none of them are happy about it. They’re faced with a decision now: lose everything, or… lose everything.

Whatever these individuals do from now on at McCann-Erickson will never have the same energy, or care, or depth that their actions at Sterling Copper had. It’s just a job now. Died and gone to advertising heaven? Sure. But there’s something to be said for building the hamster wheel instead of being on it.

– I literally sat here and stared at my computer screen for like an hour before writing this. The things I do for you people.

– This was a good episode.

– Pete punching that private school jerk was so satisfying. I can’t believe I was rooting for Pete Campbell.

– Alison Brie is the best.

– Yo, Elisabeth Moss has awesome non-Mad Men IRL hair. And I see you Vincent Kartheiser, with that beard. Don’t think I’ve forgotten about Connor.

– Less Harry Crane, please. I could do with less snivelling creepballs in my life.