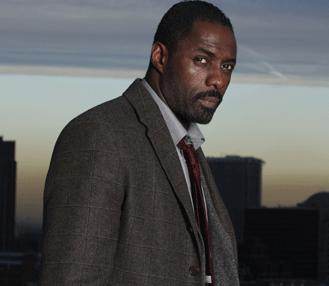 We’ve seen John Luther try to take down Alice Morgan. We’ve seen them almost bond in a strange way. Now what will happen when Luther needs the help of one murder suspect to stop another killer?

In one of the truly creepy and disgusting opening sequences in television, a young mother is kidnapped by a razor-wielding psycho named Burgess, who likes to decorate walls with cryptic messages written in blood – the fresh blood of someone kidnapped ten years earlier. (In other words, I should not have decided to have lunch while watching this episode.) It’s now a race to find both past and present victims, and it’s creepier than anything I’ve ever seen on Dexter.

Luther and Ripley try to sort out the mess that Burgess has left. Luther deduces that since the blood found at the first victim’s house was also human, there has to be an even earlier victim somewhere. Just as he sends Ripley to check cold cases, he gets an email from Alice that has video footage of Mark enduring quite the beating. Mark has turned up at the station convinced that it has something to do with Luther – given that one of the girls who attacked him told him that “John says hello.”

Not knowing any of this, Luther is interrogating the ex-cop who once went undercover trying to capture Burgess, hoping for clues to the man’s modus operandi. The details are stomach-turning, so I won’t reprint them. The ex-cop tells Luther about his harrowing fifteen-month experience undercover and how he snapped as a result. I can’t say that I blame him one bit. He says his greatest regret is not killing Burgess when he had the chance. His and ours, as we’re treated to more creepy goings-on, although thankfully it’s more about implication than actually showing anything. Still, this episode always makes me a little nauseous watching it.

Teller calls Luther into her office and tells him about Mark’s complaint. Luther would rather be worrying about the serial killer. She agrees to delay further action so he can close the more pressing case. Luther brings in a friend to look at Alice’s video in hopes that he can identify Mark’s assailants, and then calls her to ask her to “stop interfering” before he gets fired or worse.

This happens as Luther arrives at Burgess’s gallery, trying to pretend like he doesn’t want to go over the desk and strangle the man. Their entire conversation is weird and stilted, but when he has the man autograph a book for him, Luther realizes Burgess is ambidextrous, a fact which only helps to confirm Burgess is their man and it’s not a copycat. Ripley is sent to follow him, only to find that Burgess is holding a press conference in anticipation of being arrested. What a smug piece of work.

Luther realizes that Burgess has planned the entire escapade all along, and that his current victim now can’t be left alive. He gets further bad news when he finds out Teller has submitted Mark’s complaint and now he’s being questioned by Schenk from Police Complaints – Britain’s version of Internal Affairs. Knowing he may be about to be suspended, he very quickly tries to pass everything he knows on to Ripley. In the process, he deduces that Burgess must have a boat and slips out, leaving Ripley trying to cover for him.

Alice is surprised to see Luther, who is looking for her help in stopping Burgess. She asks him if he wants Burgess more than he wanted her, and he says that he does, which makes her feel as if he might be losing interest in her. “I’d be inconsolable,” she whines but he doesn’t have time to assuage her ego. She tells him that he already knows Burgess’s flaw – his being a control freak – and that he needs to “change the state of play.”

Upon going back to the office, Luther meets with Justin, who’s done some research on boats in his absence. He’s tracked down a boat that ties back to a former college friend of Burgess’s. Unfortunately, Burgess used a proxy to put on all the paperwork, so they have no hard evidence to connect the boat to him. This being Luther, he decides to forget that technicality and go after the boat anyway. They find Burgess’s current victim, but it’s too late. She’s already frozen to death in a freezer.

Justin thinks Ripley is nuts when he suggests pretending they’ve never been there in order for Burgess to think he’s still one step ahead of them. “I won’t lie for you,” he warns, though he agrees to keep his mouth shut for the time being.

Luther enlists Ian’s help in keeping an eye on Burgess, and just so happens to walk by and deck him in the face. Blood is everywhere, because when you’re built like Idris Elba, you can hit pretty damn hard. Luther makes a convenient escape to Ian’s car, with his now-bloodied gloves carefully preserved as future evidence. The two of them go back to the boat, looking for blood samples there that they can match.

Schenk is having fun interrogating Ripley about his new partner, looking for anything that he can use against Luther. Ripley does an excellent job being as vague and noncommittal as possible until Luther arrives to have their long-overdue conversation. Schenk is not a fan, wanting Luther to be suspended indefinitely. “There’s no place in the service for dirty coppers,” he says, “no matter how well intentioned.”

Yet just as everything looks to be coming together, it may just fall apart: Ian is on the phone with Burgess, tipping the killer off and asking for a huge amount of money to make everything disappear. The two broker a deal and set up a meeting.

Alice turns up to say hello to Mark and claim responsibility for his assault. “I did this because I don’t like you,” she tells him, “and because I wanted to toy with John.” If I were him, I’d be very concerned about how she can walk so easily in and out of his house, for the second time now. She tells him to withdraw his complaint against Luther and very subtly threatens him with bodily harm if he doesn’t. Mark wisely withdraws his complaint, leaving Schenk with no case against Luther.

Spurred on by Ian’s phone call, Burgess rushes to the boat in order to frantically wipe the place down, and Luther catches him in the act. Luther calmly points out to him how he’s just incriminated himself. Burgess isn’t thrilled to see the guy who punched him the face earlier, and thinks that’s going to get him off the hook, much to Luther’s amusement.

With Burgess in custody, Luther goes back to the office, where his friend has identified Alice as being behind Mark’s assault. He confronts her with the evidence. “This weird thing between us has to end,” he cautions her, pointing out that hurting Mark isn’t going to bring Zoe back to him. Her only response is that she’ll see him soon.

Zoe is waiting for Luther when he arrives home. She wants to apologize for not believing in him through the events of the last few episodes. “What you never are is a liar,” she admits. “Not to me. Nor a coward.” This is the perfect excuse for the two of them to have a moment, and it’s not surprising that they end up in bed. What isn’t surprising but is certainly creepy is that Alice has seen this from the window of the building next door, and you know she’s going to have something to say about it.

This is probably my least favorite episode of the series, but for more personal reasons – I can’t really watch it without feeling sick and wanting to take a shower when it’s over, and that’s not the kind of feeling that makes you want to rewatch something over and over again. However, the subplot also hits a turning point for our characters – we know Luther is still hopelessly in love with Zoe, but she seemed pretty much done with him until this episode, when she’s right back in his arms. Alice and her infatuation won’t respond well to that, and we know how things went the last time they met. Luther’s aware that his personal life could eat his professional one alive, so he’d better be on the ball in the near future or there could be disastrous consequences.

We’ve hit the halfway point of Luther‘s first series. I’ll see you back here next Sunday for Episode 4.