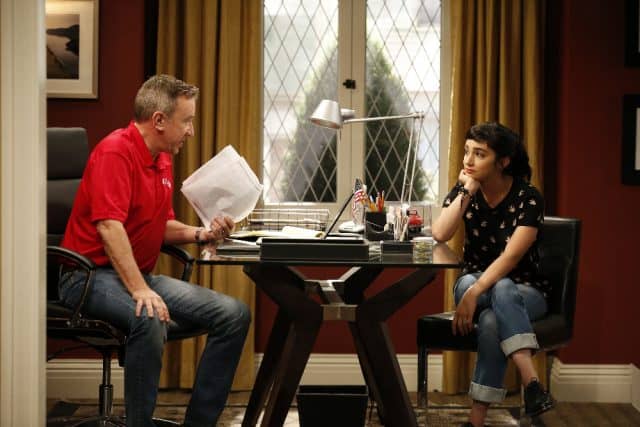 I review a lot of shows. I spend time almost every night of the week watching TV and posting my thoughts online. I’d do more if I had the time. That said, lots of shows that I cover do tackle real-world and relevant issues facing the world today, but none tackle this with such pragmatism as Last Man Standing.

This week on Last Man Standing: Mandy is seeking extra credit to pass her ethics course, so she asks her father to speak at commencement. Mike is excited about the prospect at first, until Mandy lists all of the safe space rules that the college has in place, which makes speech-writing difficult. Meanwhile, Cammy is home from college, and Eve is jealous of her success because her music career takes awhile to get off the ground.

Last Man Standing, admittedly, isn’t the first place I would look when addressing common social issues of today. But, as college “safe spaces” become more common, the more the issue explored in this week’s episode needs to be addressed. Now, I don’t want to get too political or make a political issue out of an episode review, but I will say that I’m generally a pretty moderate, reasonable person. That said, I definitely pulled to Mike’s side of the argument more than Mandy’s. I do not believe that people should be able to say offensive things just to say them, but past a certain point, context is everything. All of the “micro-aggressions” mentioned, for instance, I don’t believe that they actually became aggressive until they were said in defiance to the University’s policy. Someone’s frame of reference should be taken into account before labeling their speech as “aggressive” or “hateful”. Specific words themselves are not hateful, it’s the intent behind them that can be.

So even though I lean toward Mike’s side of this argument, Last Man Standing handled the situation gracefully, as per usual. Rather than Mike or Mandy compromising their beliefs, they reached a different solution so that Mandy could still get a commencement speaker. It’s not groundbreaking when shows characters simply come to a mutual understanding of one another, but to me it’s so human and true to life that it deserves recognition, which is why I choose to spend time watching and reviewing the show each week.

I also appreciated Eve and Cammy’s story, as it details briefly the plight of both people who struggle to make it in the music business, and college students who thrive after a so-so high school performance. Again, these are not commonly told struggles, but they’re still realistic and relevant.

Last Man Standing does a beautiful job of balancing social issues with laughs and relatable characters. It’s not something you see extremely often on TV today, but it’s still important and relevant.

Mike is asked to speak at commencement as a favor to Mandy, and Eve reunites with Cammy on this week’s strong episode of Last Man Standing.