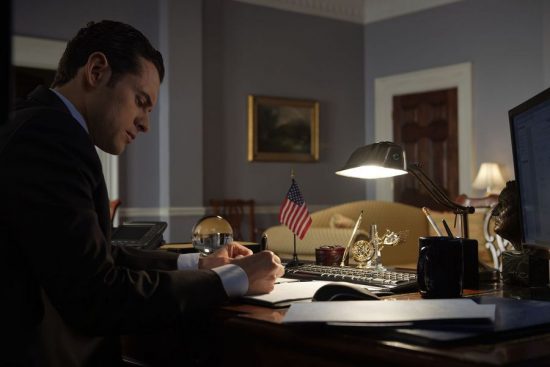 Though Designated Survivor is a modern day conspiracy drama, this week proves the best cues from the oldest of tales. For too long President Kirkman and those he trusts have been in the dark about how deep the conspiracy runs. Now not only does he know who his enemy is, he is coming at him full court press. It’s never that simple though. As soon as the good guys think they have a handle on things, they’re thrown a curveball even the conspirators are shocked by. I promise you, this was a twist you didn’t see coming.

Picking up where we left off last week, Hannah spills everything she knows about the conspiracy surrounding the Capitol bombing to President Kirkman. That Majid Nasaar was never involved, that MacLeish was in on the Capitol bombing from the beginning, that former Chief of Staff Charles Langdon is still alive and on the run, etc. Kirkman takes Mike’s advice to tighten his circle. He is on alert, and angry as hell coming face to face with MacLeish, but keeps it together. From this point forward, Kirkman can’t even tell his own wife what is going on for the sake of her safety. It’s understandable given the circumstances, but separating the confidentiality of the presidency and the confidentiality of their marriage is not something they anticipated.

Because all of the chaos, Alex only now gets the opportunity to tell her husband that Aaron is considered a suspect in the conspiracy. It’s hard to believe he’s involved, and based on his private reactions, we can be about 90% sure he is innocent. Just in case Aaron isn’t a traitor, Kirkman smooths over any tension between Aaron and Emily by saying she was conducting a run of the mill background check. Congresswoman Hookstraten is not so easily swayed. Because Kirkman trusted her to keep an eye on MacLeish, she needs to know how in the world the President’s shooter was killed instead of captured. It is in this conversation that Aaron gets the first clues that MacLeish is under unofficial investigation by his boss, and Hookstraten leaves even more disturbed by MacLeish’s latest actions.

From this point forward, Hannah reports directly to the President, and she must work quickly before MacLeish and his allies realize she is no longer in custody. Hannah gets to work securing help from a new ally since they don’t have an Attorney General at this time. They may have had their differences, but the Interim Head of the FBI John Forstell is trutworthy when it comes to this. Atwood would be more than happy to help, except the conspirators didn’t keep up their end of the bargain. Atwood is in prison, and his son is still a hostage. Hannah has no experience with kidnappings, so she can’t be the one the find Luke Atwood. Her job is to remain a ghost and find someone alive who could paint a target on MacLeish’s back. Joiner, a recovering addict from MacLeish’s military unit fits the bill.

Despite all evidence to the contrary, MacLeish’s first instinct isn’t to kill. Now he is a corrupt traitor to his country, but once upon a time he was a soldier who believed in protecting his men no matter what. His Lady Macbeth is the one who describes Joiner as a necessary “casualty of war”. Hannah pushes Joiner just enough for him to panic and demand a meeting with MacLeish, and MacLeish walks right into her trap. Before Beth MacLeish can stop her husband, he has confessed to lying to Congress about one of his military missions. The cat is out of the bag, but Beth is a loyal servant to her cause. She doesn’t hesitate to shoot first her husband, then herself, in the head. Now the White House has an unprecedented nightmare on its hands on top of losing their only link to a terrorist cell.

Just a personal gripe to note: someone should have told Seth what is going on, at the very least as it pertains to his job. It was dangerous for the Press Secretary to be blindsided by an impromptu press conference given by the Vice President. They could not have foreseen MacLeish’s death, but the person in charge of wrangling the press should probably have had a heads up that the White House was under attack from the inside.  All things considered, it may be best for him to step away from the podium next week.

Did you see the MacLeish’s deaths coming? How does a dead Vice President, even a corrupt one, affect an already fragile government?

Designated Survivor Season 1 Episode 12 Review: "The End of the Beginning"

The tables are finally turned on Designated Survivor‘s traitor, but results in even larger problems.