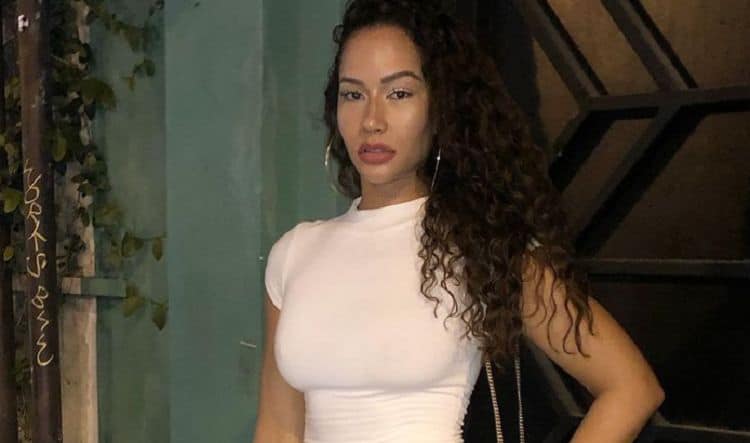 Kris Stephens may not be a name you’re familiar with, but she has been working in the music industry for over a decade. During that time, she has earned a lot of respect as a singer and songwriter. Recently, however, the attention she’s been getting hasn’t had anything to do with her talent as an artist. She is currently in a relationship with R&B singer, Mario, and the two have recently decided to go public. It’s unclear exactly how long they’ve been together, but they both seem to be happy and some fans are wondering if they will eventually decide to make music together. Continue reading for 10 things you didn’t know about Kris Stephens.

Kris was born and raised in an area of Maryland called Temple Hills. Her home town is located less than 20 miles outside of Washington D.C. Kris decided to stay in Maryland for college when she briefly attended Towson University. She decided to leave early to pursue her music career.

2. She Started Writing Poetry As A Child

From an early age, it was clear that Kris was a very creative person. She always loved to write and began writing poetry when she was still in elementary school. Her poetic skills eventually lead to songwriting and she started singing in choirs at church and at school.

We weren’t able to find any information on Kris’ specific religious beliefs, but we do know that her faith is very important to her. It also appears that she is a Christian. Her Instagram bio reads “GOD First” which makes it clear that she keeps her beliefs at the forefront.

Music is the thing that people most commonly associate with Kris, but it isn’t the only thing she’s passionate about. She’s very serious about keeping herself in great shape and she’s all about living a healthy lifestyle. She spends a lot of time working out and she loves sharing fitness tips with her followers on social medial.

5. She’s Worked With Some Of The Biggest Names In The Business

Kris Stephens may not be a household name, but she’s worked with plenty of them. She has written songs for major artists like Jennifer Lopez, Chris Brown, Ron Isley, and Tank. It’s been a few years since Kris has earned any songwriting credits, but it’s highly unlikely that she’s gone for good.

For the most part, Kris appears to be a pretty private person. She doesn’t share a lot of information about her personal life, but one thing she has made clear is that she is a very proud mother. In an Instagram post dedicated to her son she said, ” I still thank God for you everyday I watch you sleep, hear you say “I love you Mommy”, and watch you grow into the handsome, intelligent, gentleman you naturally are. Everyone who meets you immediately falls in love with your pure spirit..even strangers take the time to compliment how well behaved and adorable you are…”

7. She Hasn’t Released An Album

Despite being in the industry for many years, Kris has yet to release a project of her own. In fact, the only singles that have been credited to her have been features on other people’s songs. For a while it appeared that she was working on an EP that was scheduled to be released in 2020, but that project never came to pass.

8. She Was Nominated For A Grammy

Even though she hasn’t released any of her own music, Kris’ talent has been widely recognized. According to her social media bios, she was nominated for a Grammy. Unfortunately, we weren’t able to locate any information on when she was nominated or what category it was for.

9. She Was In A Pitbull Video

I wasn’t joking when I said that Kris has gotten to work with some of the biggest names in the business. Among when is international pop star, Pitbull. Not only did she help write the Pitbul song “Get It Started” but she also appeared in the music video. To date, the song has more than 106 million views on YouTube.

Kris has spent a lot of time focusing on her music career, but she also has plans to venture out into the business world. According to the bio on her website, she is also an entrepreneur who has two businesses in the works although there’s no details on exactly what they are.