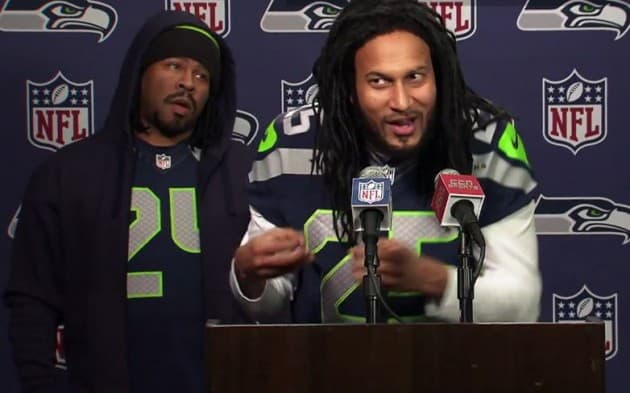 The fourth season of Key & Peele has trended towards longer sketches that delve further and further into the show’s trademark knack for absurdity; knowing that, it’s no surprise that “Super Bowl Special” is essentially a 42-minute sketch unto itself, a lengthy, often clever look at the culture of football – and specifically, the culture of football on television. Interspersed with other homage-laden bits, “Super Bowl Special” isn’t the most poignant or consistently funny Key & Peele. However, for an hour-long episode that relies mostly on a single conceit, “Super Bowl Special” is still an impressive, entertaining “holiday” special.

On the surface, “Super Bowl Special” is a parody of every NFL pre-game show on television; and most of the time, it’s where the episode is at its best. For a premise constructed around two guys hosting an hour-long sports show, “Super Bowl Special” gets a lot of mileage out of the material, touching on everything from the superficial nature of football commentary, to the masculine, passive-aggressive bro culture of the NFL and its legacy hierarchy (the latter is particularly keen: just look to NBC’s coverage of the Super Bowl, with Rodney Harrison wearing a Super Bowl ring on both hands for proof). Bertram Skilling and Dante Pibb are two of Key & Peele‘s richest creations, a duo whose ironically-parallel career paths (Skilling a third-string receiver with a Super Bowl ring, and Pibb an eight-time Pro Bowler with no titles) give the entire episode a conflict to ground itself on.

With those two, “Super Bowl Special” never runs out of material; the same isn’t necessarily the case for some of the sketches inside the sketches. The 60 for 60 special on scouts who scout NFL scouts is a sketch that’s a little too clever to actually be funny, its only redeeming factor the appearance of a committed Wendell Pierce in the sketch. The same goes for Craig Robinson’s cameos; his energy just feels a little out of place in the Key & Peele world, especially when the episode goes for its Pepsi-sponsored “halftime” show, a three-and-a-half musical bit that is basically Robinson dancing around Pepsi logos and faux shots of excited fans. In those moments, the charm of Key & Peele‘s all-encompassing parody of American football culture runs a bit thin.

In fact, the only real guest star appearance that is any fun is Allison Janney, who is the star of every show on the fictional CCN network where the “Super Bowl Special” is airing, who eventually becomes the master of the world when the football robot (a thin joke about Fox’s infamous, unfortunately named football robot Cleatus). Besides that, the best moments of “Super Bowl Special” are contained to Key and Peele themselves; even the “East/West Pro Bowl” sketch falls a little flat, given the lifeless deliveries of the athletes inside the sketch (whose names inspired the original sketch, including D’Brickashaw Ferguson), and the repetitive nature of Key & Peele delivering another two dozen or so fake football players (though the re-emergence of Dan the kicker later on is hilarious).

It makes for a pleasant, witty, though never consistently hilarious episode; and like the rest of Key & Peele‘s fourth season, the best sketches are cut a bit short, right when they’re getting interesting. Perhaps the most promising of the hour was the “Word Association” homage; however, it never goes beyond the obvious underlying racism of NFL scouts and talking heads (where white players are often “intelligent” and black players are “physical specimens”) to reach for a unique angle on the issue, instead ending on the easy resolution of everyone agreeing that Rob Gronkowski is a silver back gorilla. Funny? Sure, but like many recent, promising Key & Peele sketches, the jokes seem more designed towards mass appeal, than poignant, revelatory punchlines, something the duo have shown a great propensity for in the past.

Even the best sketches of the night – the Super Bowl press conferences – feel a bit lacking. There are moments when those sketches feel inspired: when the reporter asks Marshawn Lynch what he’s having for dinner (after he’s been saying “biscuits and gravy” for five minutes straight) points out the sheer ridiculousness of both NFL journalists and Beast Mode himself when it comes to dealing with the issue of media access to players (and whether its good for NFL players to participate, or be required to). But from there, the sketch just circles around on itself, leaning on the “biscuits and gravy” line rather than following through on the idea of reporters challenging themselves and Lynch to do better (to disastrous results, I’d imagine) – which, in comparison to Key’s passionate Richard Sherman interview about The LEGO Movie and Best Director Oscar nominees (or lack thereof, in LEGO‘s case), feels a little toothless.

Like most of Key & Peele‘s fourth season that aired last fall (the final 11 episodes of season 4 will air later this year), “Super Bowl Special” is funny, absurd, and often features slightly undercooked points of view on the topics it’s tackling (I couldn’t make it through the whole thing without one football pun, okay?). None of the sketches will ever rank among Key & Peele‘s best, but as a holdover until the next batch of episodes seven-plus months away, “Super Bowl Special” serves its purpose well.